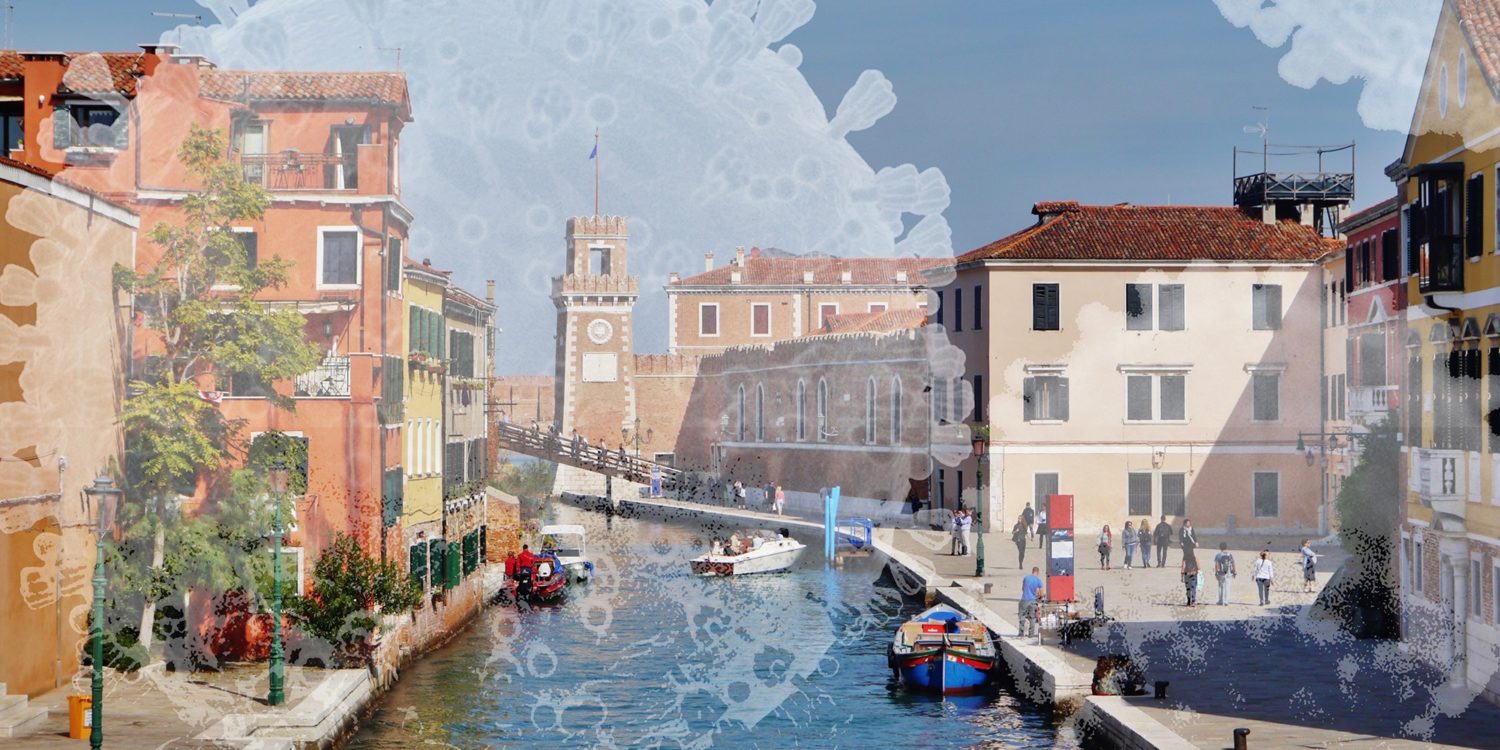 As COVID-19 brings regular cultural programming to a standstill, maybe now is the time to rethink the whole way we produce and consume culture.

Since it broke in Wuhan at the beginning of the year the Coronavirus epidemic has spread rapidly worldwide, with 138,249 cases and 5,082 deaths at the time of writing. After reaching Northern Italy in late February, the epidemic has already prompted the closure of schools and universities across the country, as well as the cancellation of large public events, and, more recently, a complete nationwide lockdown, all in an attempt to minimise the effects of the outbreak.

One casualty of these measures is the Venice Architecture Biennale, which has been postponed until 29 August. Leaving aside the serious, often tragic and as yet unpredictable human impact of the virus, this unprecedented disruption of conventional cultural programming puts to bed any notion that we can carry on as if the world isn’t falling apart. Thanks also to the bright, unflattering light that the virus has shone on our society’s creaking social safety net, we can use this pause in regular proceedings to think seriously about the very purpose and value of international creative events and indeed everything we assume to be a vital part of our schedule.

First, let’s address Venice specifically. Even before the virus outbreak, it was becoming increasingly clear that the city could do with a break. In the midst of floods throughout November, Venice experienced its second-highest tide ever recorded. Along with the obvious explanation of climate change, the floods are thought to have been exacerbated by another essential feature of the Venetian economy: large cruise ships bringing tourists to the lagoon. The city is one of several to have been sucked dry by the growth in mass tourism in recent decades, and given its relative size compared to other tourist hotspots such as Barcelona and Amsterdam, probably the worst affected among them.

In a recent article for English-language Italian newspaper The Local, Rebecca Ann Hughes explains how the focus on tourism has completely decimated ordinary social life in the city. Deaths outnumber births, schools have emptied, infrastructure is mainly focused on tourist trade, and rents have gone through the roof thanks to Airbnb-style lets, to name just a few of the effects. With the flooding in November and now the Coronavirus outbreak, Hughes questions whether this may be a good time for Venice to withdraw from the global tourism arena altogether. But then again, for a city that has become so attached to hosting foreign visitors withdrawing from the tourist trade would be an incredibly tall order, especially when the whole world looks to events like Carnevale, the Venice Film Festival and the Biennale to keep on happening, bigger and better every year.

With the growing prospect of irrevocable climate breakdown and an accompanying mass extinction event, it is now clear that we have to move away from an economic model wedded to endless growth. Sadly we’re coming at this after decades of exponential growth in many areas of the economy, biennials included. For almost the first 100 years of the Venice Biennale’s existence, there were only a couple dozen other biennials and international art fairs elsewhere in the world. But by the early 2000s, the number increased to over 50. The Directory of Biennials now counts 267 of them around the world.

Such spectacular growth in just a few decades can perhaps best be explained by a belief that big creative events are good for a city. This, of course, is the result of the “creative city” urban development model, of which biennials are an essential part. Premised on the idea that a city’s economy can be boosted through policies attracting creative professionals, the reality of the creative city model is much less rosy: displacement, stark inequality, homogeneity (in both culture and social life), and increasing profits from inner-city property for a few and a rising cost of living for everyone else actually trying to inhabit these places.

As we know, this creative city model has been accompanied not only by expensive iconic architecture for cultural institutions but also by increasing exploitation of creative professionals, who are widely encouraged to forego proper pay and decent working conditions to do what they love. Again, the biennial industry’s growth goes hand in hand with this boneheaded conception of creative work. Biennials are generally built on thousands of hours of un(der)paid and insecure work, a price that a lot of artists, researchers, designers, curators and programmers decide to pay in exchange for international exposure, which still remains the main way to build a reputation and a network. But without any biennials to go to anyway, perhaps these people can reclaim some time to pursue other (most likely more thoughtful and sustainable) outlets for their creative work.

To be clear, we still believe the biennial format can offer a brilliant space to share knowledge and experiment. As one of the selected organizations for the Dutch parallel program of the 2020 Venice Biennale, Failed Architecture is well aware of the essential support for research and innovation they can offer. But right now, more than anything, they provide an unhelpful excuse to consume and produce in an entirely unsustainable way. Aside from the enormous amounts of exhibition material produced for the event, much of which goes to waste once its over, many of these biennials prompt thousands of people to fly to them. And what for? Less to enjoy the work, and more to network over orange-coloured drinks, something which, to be fair, exerts a powerful influence over the whole cultural sphere (networking not orange-coloured drinks). Indeed, when we decided not to go to Venice, and instead use our resources for local events, the main concern was about forgoing the immense networking opportunity that the Biennale offers.

As we have already seen since the virus emerged in the beginning of the year, affected areas have seen a marked drop in carbon emissions. For instance, China has seen its carbon emissions reduced by a quarter in the past month as a result of widespread quarantines. Further afield, the outbreak has already plunged several airlines into crisis, including Norwegian Airlines and FlyBe, while others have had to ground large parts of their fleet. While this temporary pause is likely to prompt a redoubling of unsustainable enterprise after the crisis has receded, and will probably erode the airline industry’s already flimsy efforts to address their carbon emissions, the current moment should be used to reconsider air travel and organise consumer pressure. As the postponement, and possible cancellation, of the Venice Biennale underlines, it will invariably help the ever-growing biennial-industrial complex inadvertently reduce its carbon footprint.

But more than that, the virus has shown that a lot of us are willing to take drastic action to address a global threat if it’s staring us in the face. Let’s make this temporary disavowal of international events a more permanent thing. Let’s take note of all the creative things we did instead, and do them together again next year, even make it a yearly event. These actions could just as well evolve into more tangible and lasting spatial formats that not only offer an outlet for creative production, research and networking, but also provide everyone involved with the necessary mutual support so that more of their daily needs are covered: from food, transport, childcare, all the way to housing, and, of course, culture and social life. Right now, this is unlikely to reassure those people whose livelihoods rely on the economies surrounding these international events. But the acute economic precarity uncovered by virus-related event cancellations also underlines the fact that the industry must find better ways of supporting both creative workers and local economies.

In his book Rhythmanalysis, urban theorist Henri Lefebvre explored the tension between the linear rhythms which regulate contemporary society, and the cyclical, natural rhythms which continue to persist in opposition to them. Lefebvre was interested in the moments of clarity that arise when people are temporarily freed from the hold of the capitalist economy and forced to become once again in harmony (or, to use his term, eurhythmia) with their natural bodily rhythms: when we are sick, when we oversleep an alarm for work (or quit altogether), when we all take time off during a public holiday, or when we are forced to stay home because of a virus outbreak. He saw these moments as both deeply precarious but also eye-opening, allowing us to finally observe the regulating structures that dominate our lives, reflect on their purpose and question their hold over us. For all its devastation, the virus has given us an opportunity to experience a situation where we simply cannot go to any international art events. Which hopefully means that we realise that creativity can survive and perhaps flourish without them.

But if it is to flourish, then we need to imagine ways to fill certain gaps left by the biennial’s absence, rethink how we can create, share and engage with people without so much consumption and waste. This would necessarily involve making better use of already-existing local knowledge and activism while at the same time taking advantage of ubiquitous telecommunications technology (such as ever-improving video call software, which is already beginning to incorporate AR and VR components). Such a reorganisation would have the effect of preserving critical debate while generating more local articulations of discussions that are too often too abstract and placeless. Meanwhile, this more decentralised global discussion could also direct energies to local projects and immediate spatial initiatives that benefit social and economic life. Either that, or it’s back to fleeting encounters between Twitter friends, comparing tote bag harvests in the burning heat outside the Venice Arsenale.

add comment
Chiara and Daphne
Who said we’d never go to Venice?? At last, after two years of online meeting, and after having turned upside down the idea we had for the Biennale in order to accommodate new—pandemic compliant—ways of working and exhibiting, we have decided to join the rest of the Parallel Program teams in Venice for a moment of presentation and celebration. Yet, no part of the budget was spent towards the event in Venice, and the result of the project will be available on the website—all Aperol Spritz will be paid for out of our own pocket.
Related