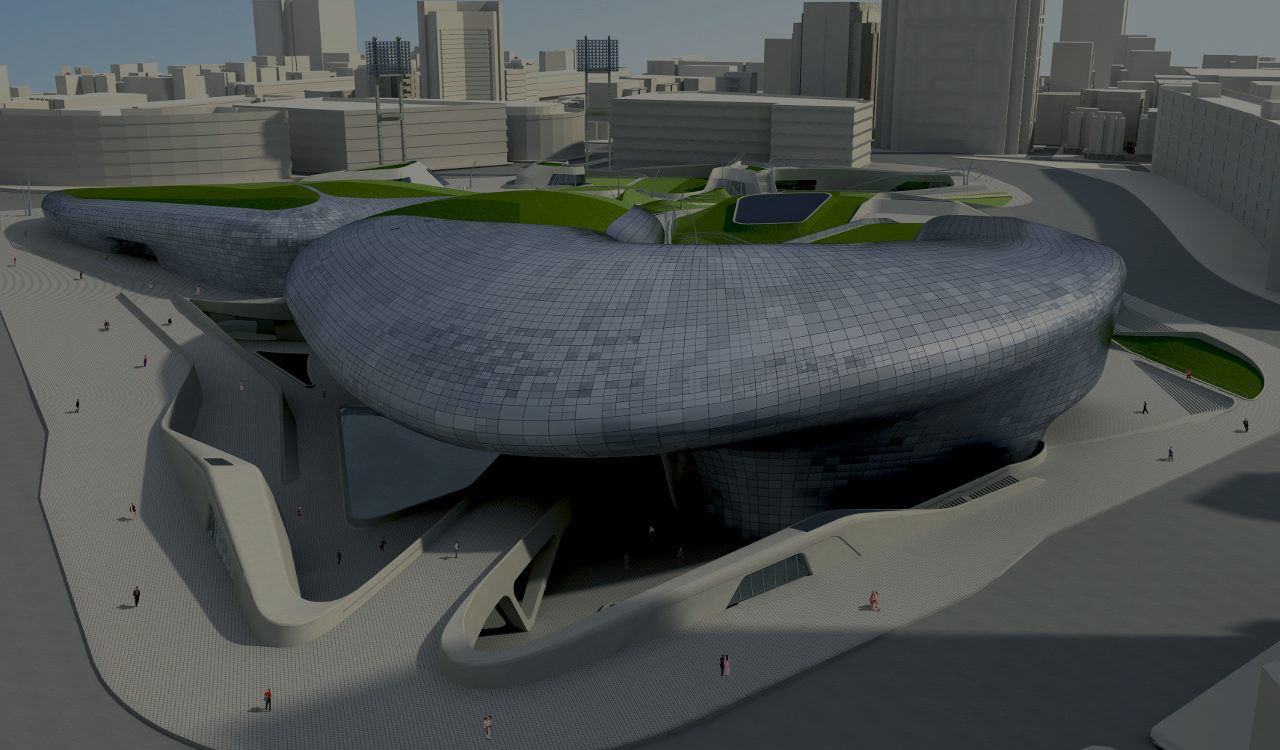 Jeong Hye Kim argues that what we need is not design-capital but design-city: a social space in which the ideal of the city is represented, embodied, and sustained.

“The World Design Capital is a city promotion project that celebrates the merits of design. Held biennially, it seeks to highlight the accomplishments of cities that are truly leveraging design as a tool to improve the social, cultural and economic life of cities, throughout a yearlong programme of design-related events” – World Design Capital (WDC) 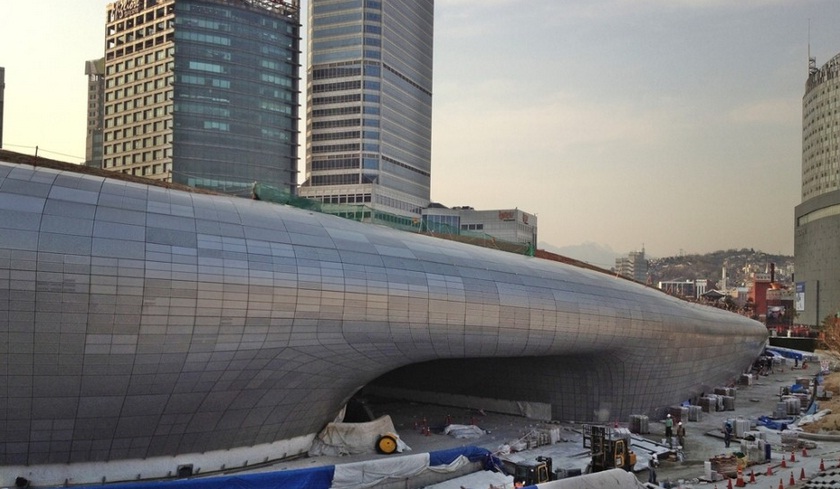 In 2010, South Korea’s capital, Seoul, sealed the win – becoming the first WDC. Sponsored by the International Council of Industrial Design (ICSID), the award had previously been prized to Torino (or Turin) in Italy in 2008, when the programme was in its pilot stage. Following Seoul, Helsinki (Finland) held the title in 2012. Having been in existence for over five years, with Cape Town (South Africa) marked to be its successor in 2014, it’s clear that the title holds some significance – but to what degree it makes an impact during and after its reign is something to be considered. Does this competition create design ‘capital’? Or is the pursuit of being a ‘design capital’ more successful than what the title actually brings to design in the city?

As it explicitly manifests, the WDC is a city marketing project in global economy and culture, showing a clear relation to municipal policies and politics. When Seoul held the title from 2010 to 2011 the municipality (chaired by then mayor Oh Se-Hoon) invested vast amounts of the city’s budget in several development projects, many of which were spectacularly designed to draw an immediate and enthusiastic response from the media and the public. One of dominant projects was the construction of Dongdaemun Design Park/Plaza (DDP) designed by renowned architect Zaha Hadid. As with other Hadid buildings, it was expected to become a landmark that might promote international design trade shows and increase the number of tourists coming to Seoul. 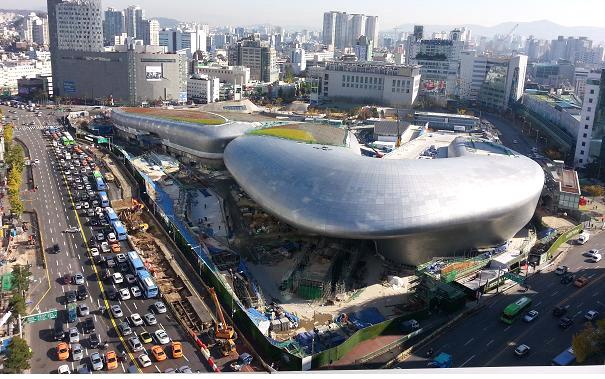 At the end of 2011, as Seoul’s WDC title was coming to an end, Park Won-Soon was instated as the new Mayor. It was clear that Park’s approach to design was different from that of Oh in almost every respect; while the former mayor took design as a means for economic prosperity, the new mayor’s approach concentrated on the social responsibility of design. For example, the initial promise of the DDP had to be shifted from the promotion of cutting-edge designs to programs that engaged more with the citizens (Park prefers the term ‘citizen’ to ‘public’). Accordingly the meaning of city, citizen and the civic quality began to be re-illuminated and discussed from his inauguration.

After receiving the title of the WDC and completing its years of design programming, Seoul still remains under the influence of a haunting notion of design as a magic slogan that might guarantee a better life, predominantly in economic sense. The city is now literally experiencing a post-design-capital period, where the real meanings of ‘design’ and the ‘city’ are being sought to be redefined, yet those are still used ambiguously mixed with the economically charged term ‘design-capital’ of the previous years. 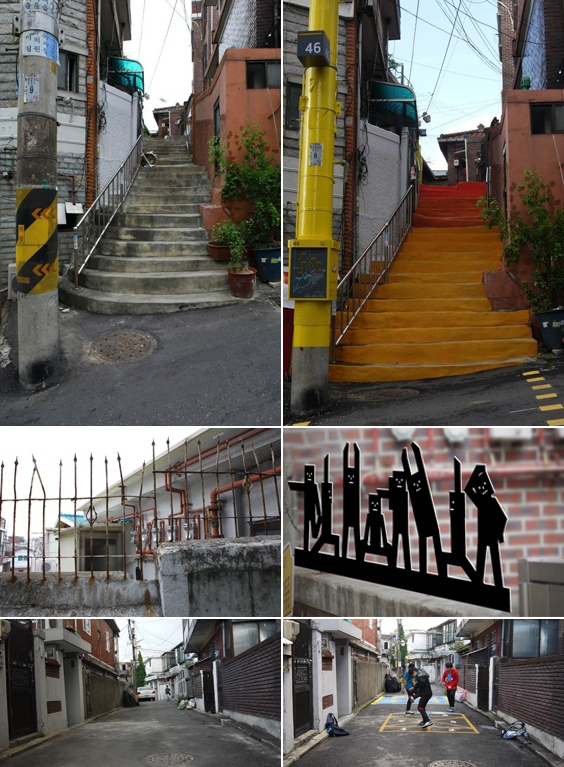 Crime Prevention through Environmental Design (one of the social design programs, Seoul, 2012-13).

For better or worse, in Seoul, the title of WDC drew attention to the idea of design in the city. This runs in line with the global trend of (re)development of old metropolises in the West and emerging cities in Asia. In megalopolises like Seoul, a closer look is required to understand the multidimensional aspects of the city. Moreover, post-colonial developing cities including Seoul, which experienced forced modernization through colonization, and where development and redevelopment are still taking place simultaneously, exhibit an even more complex urban space with many contradictory layers and patterns of growth. One way to understand such an organic dynamism and figure out design directions in these cities may be to examine the conditions that engender the form of contemporary life in the urban environment – chief among these conditions are the global economy and digital technology.

Global Economy and Design for Human Subjectivity
The cityscape of today is almost homogenous regardless of location or its historical basis. Historically, homogeneity of taste dates back to the beginning of industrialization and capitalism, which is becoming even more prevalent in today’s global economy. People consume the standardized flavor of food franchises while enjoying the same entertainment programs live on the web. For designers whose major job is to make a distinct form, globalization is a challenging condition since they have to render specific qualities in a universalized and generalized culture.

Homogenization of taste is not expected to slow down as long as the global economical system can be sustained. Certain alternative production systems may provide consumers with more options, but this is a misconception – one which makes consumers think that they are making their own choices, when in fact the neoliberal global economy and corporate system is actually being reinforced. Homogeneity of taste in the global economy, as such, matters in terms of consumers’ dwindling sense of subjectivity and identity as well as of small local businesses in crisis.

The job of design in global economy is no longer a matter of industry only, but becoming associated with multiple facets of socioeconomics, too. This is why design practices are increasingly being engaged with social lives and cultures – DIY design and community caring, which are based on local production/consumption systems and the citizens’ voluntary participation, are some of the examples that might enliven the subjective socio-economic activities – trying to touch upon the real world in the sense of an empirical field of life and not a market reality.

Digital Technology and Design for Human Communication
The vision of digital technology has been nothing but promising to human civilization. It seems to have infinite communication potentials, going beyond spatial or temporal limits. However, mobile communication has so far proved to be inverse proportional to physical human contact. Sherry Turkle (Professor of the Social Studies of Science and Technology in the Program in Science, Technology, and Society at MIT) describes this as ‘connected, but alone’ or ‘alone together’, asserting that the more we are connected through the digital network, the less conversation or real communication occurs. Designers, who, among other social groups, used to be at the forefront of the development of digital communication technology and its market expansion, now face a new challenge, one example of which is the loss of human contact caused by mobile technology.

The lack of human contact is not only a matter of digital communication but of urban planning of so-called ‘smart cities’ including several planned towns of Korea (e.g. Digital Media City and Yongsan International Business District in Seoul or Songdo city in Incheon). The cityscape of these regions is, as widely known, defined by cutting-edge digital technologies and architectural engineering techniques. The over-human-scale townscapes created by gigantic blocks and heroic super skyscrapers, however, often deprive the inhabitants of the sense of being attached to a place, while making the space disconnected from history. During the years of ‘design-capital’, Seoul (and Korea) has accelerated such city (re)development plans to elevate the city’s brand value. In this sense the title design-capital alludes to design = capital.

On the other side of this reliance on digital technology, the changing urban circumstance has driven designers to be aware of the loss of emotional contact and to therefore explore alternatives to recover the subjectivity and community bond in the city space.

From Design-Capital to Design-City
In the era of global economy and digital technology, urban designers are increasingly concerned with the [loss of] individuality, subjectivity, real communication, and a community bond by which the citizens achieve the civic ideal. In short, design in the city is design that engages with the citizens for civic quality of democracy. To better articulate the meaning of design-city in this context, it could be worth re-examining the etymology of design contra techne:
Disegno refers to 1. outline, 2. drawing (dessin), and 3. ideation/conceptualization (dessein). Normally, however, we conceive design as design-practice that is closer to techne (as practical rendering) than design (ideation/conceptualization).

Depending on the understanding of design and techne, the meaning of a city changes, too. For modern designers in the early twentieth century, who pursued to suggest a decisive utopian system, the city was conceived as a (military) machine that protects the inside from the outside world, and the human being as a part of that system (we know that modernist designers such as Le Corbusier dreamed of a mechanical and technological  world of utopia). On the other hand, based on the conception of design as a process of ideation, the city becomes an organism that evolves through constant transactions among individuals, communities, and built/natural environments. It could be assumed that while modern designers were pursuing the techne-driven-city of utopia, for designers of the 21st century in the city of organic social life, utopia could be conceived as a design-driven-city that embodies itself the ideal of the city.

Marché at Hyehwa, a monthly urban farmers’ and food market in Seoul, organized by farmers, cooks, and artists.

In the world of a neoliberal economy, there has been a prevalent [mis]understanding about the design-city as a city whose economy is driven by the investments in top-down design policies, which often excludes the lives of a large portion of its citizens. A recovery of the original meaning of both ‘design’ and ‘city’ seems to be a solution to rebuild the conception of design-city as a city driven not by design as a tool for capital, but by design as a systemic strategy for the civic. Put simply, the design-city is a social space in which the ideal of the city is represented, embodied and sustained. In this sense, the design-city embraces the idea of sustainability. Hence, the designers for the design-city need to understand the ideal of the city, render a sustainable plan, and find the point at which technology meets with the city ideal. Here again, a multidisciplinary approach is necessary for designers to link the ideation of design with the practice of techne.

Seoul’s title of design-capital was handed over to the next city, but the design projects are still going on and will continue to affect the city’s design and the citizens’ lives. The DDP, for example, opens in 2014 and only then will the design programs be revealed. When it is eventually opened, the building’s value as a landmark will no longer be a central concern – Hadid’s building does not have as many unique qualities as Bilbao’s Guggenheim in the 1990s. Instead its identity will rely on the value of their programs – how much it will engage with the public and explore the ideal of a design-city, not that of design-capital.

Jeong Hye Kim
Jeong Hye Kim is a researcher and translator specializing in architectural design and the urban environment. Based on the idea of the organicism in architecture, she is searching for parameters for sustainable urbanism - particularly in the context of post-colonial developing countries.

add comment
Mr. Daniel Pimental
Designing the City is a bold attempt to develop a version of what a sustainable city structure could be and to apply it to a real place. Our streetscape spaces have the potential to be vital agents in the fight against climate change.
Related