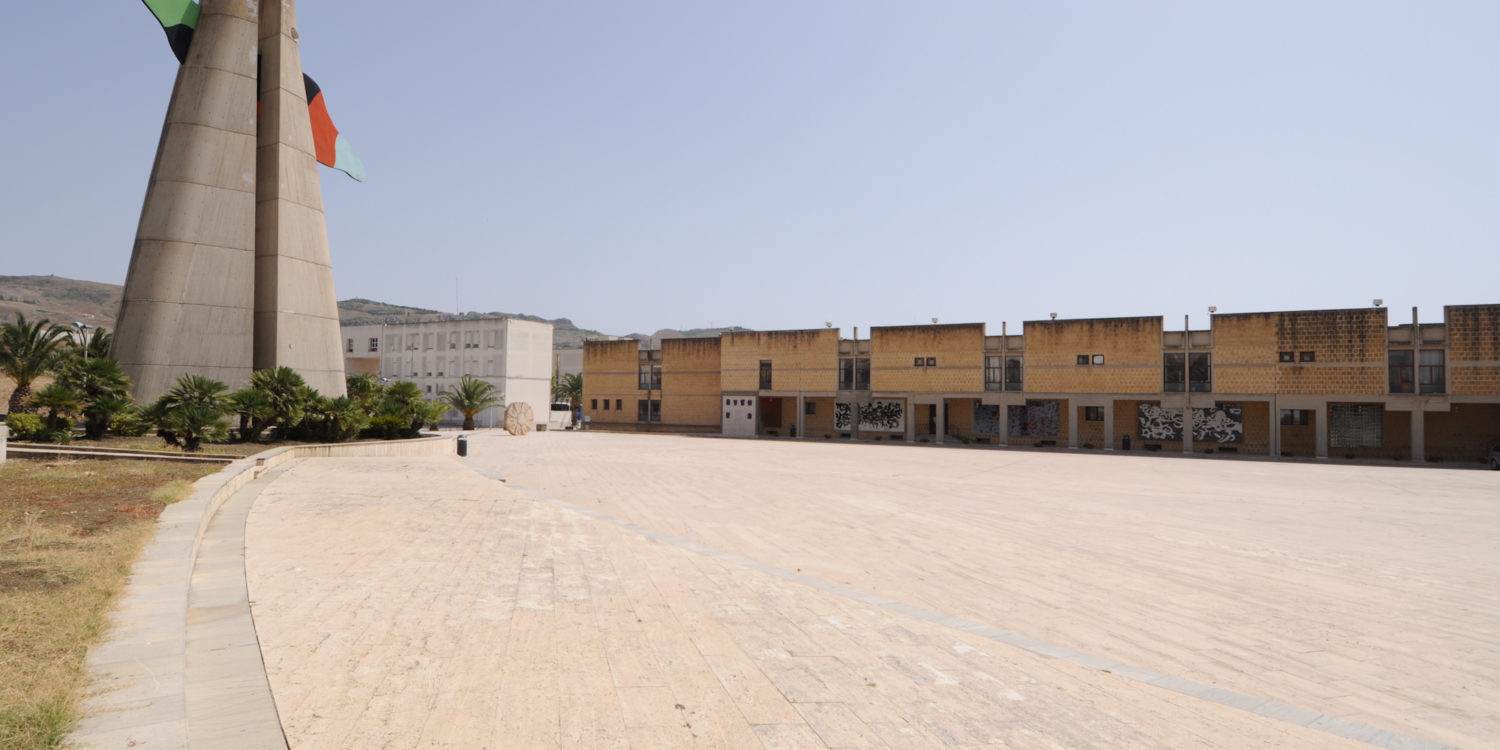 Conceived in the aftermath of the devastating western Sicily earthquake of 1968, the visionary project for the reconstruction of Gibellina illustrates the possibilities and limits of urban art as a regeneration tool.

I am walking through a kind of monument-portico-market on a hot Sicilian summer day. A grand entrance welcomes me to a large square filled with palm trees and pyramids. As I continue to wander around a series of interlaced public spaces, I observe elementary forms, patterned flooring and warm colours highlighting the gigantic scale of the space – a scale that operates way beyond the human. Among the many sculptures, one catches my eye: ‘Anthropomorphic Traces by Nanda Vigo’, I read. Yet, there is no trace of human life. No shop, bar, service, or anything catering to human activity has settled in this place. The architecture stands as a monument to the city’s silence and absence of life. 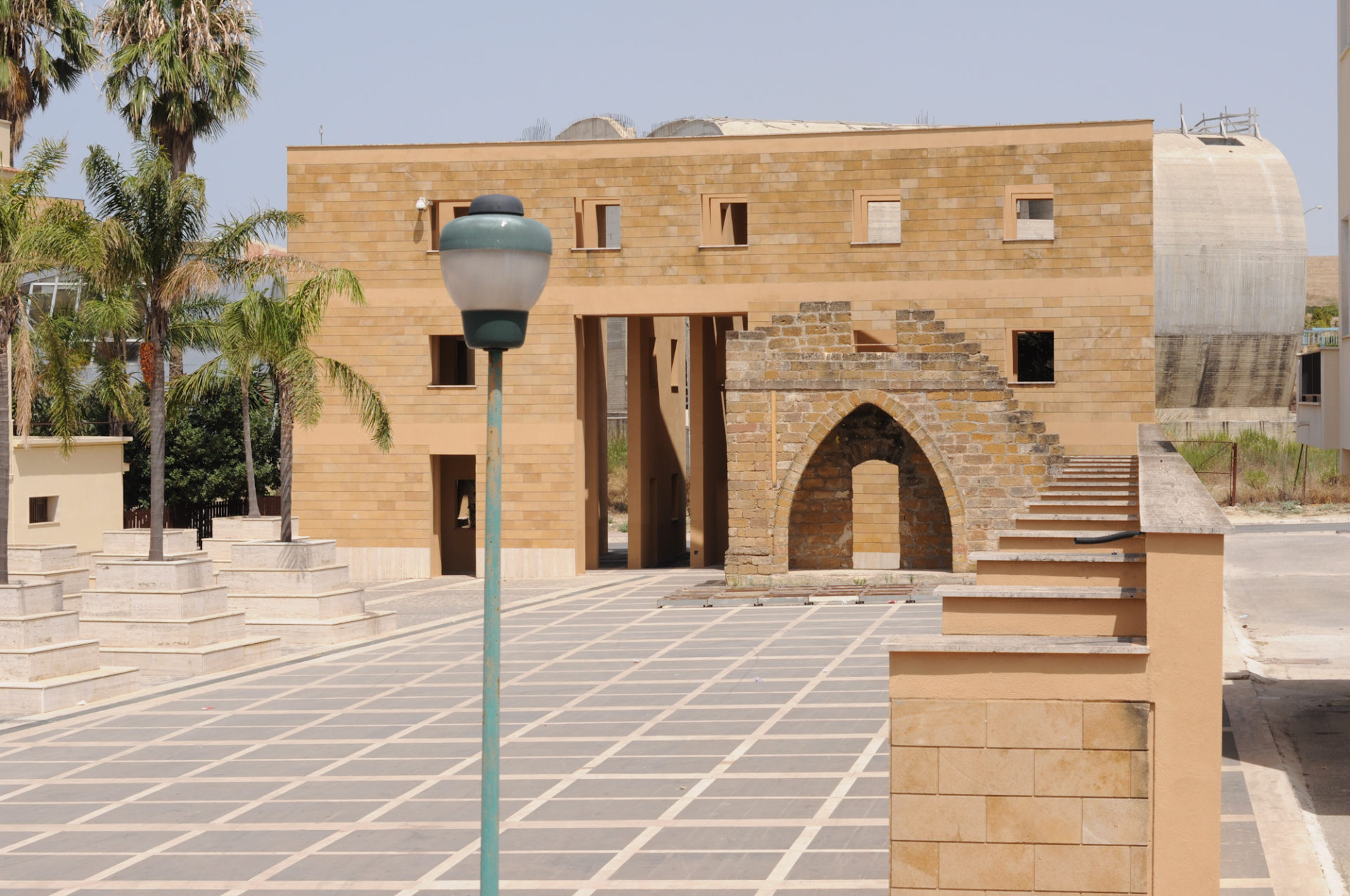 This is Gibellina Nuova, a built-from-scratch city born from a visionary urban project, one of the many scattered throughout the world: from the “ideal cities” of the Renaissance, through the English garden cities movement, to the rational planning of Brasilia, and the experimental project of PREVI in Peru, to mention nothing of the contemporary proliferation of new towns in middle Eastern and South-East Asian contexts.

But even within this niche of visionary projects, Gibellina fascinates for its pioneering attempt to break the norms of traditional urban planning. By creating the conditions for a multidisciplinary ground for experimentation, the public realm of Gibellina has been transformed into a landscape of artworks. Its process of creation echoes the contemporary debate on urban art as a regeneration device.

And yet, like so many of its other visionary and utopian counterparts, Gibellina Nuova is not an accurate reflection of what its planners envisioned: not only does the city remain unfinished, abandoned, and decaying, the original plan has had to be reconciled with the needs of an unexpectedly small population. What happened in the transition from utopia to reality? Considering people have inhabited this place for many decades – and in the process remade it – perhaps there is something else to learn about Gibellina nuova that has to do less with modernism and more with human agency.

The vision
In 1968, a violent earthquake destroyed a vast area of western Sicily, leaving about 100,000 people homeless. The small city of Gibellina, one of the most affected places in the Belice Valley, was razed to the ground, and its community of shepherds and farm labourers relocated to temporary tent camps.

The then mayor of Gibellina, Ludovico Corrao, acknowledged the inadequacy of conventional urban planning strategies in post-disaster reconstruction in Italy, which over the years led to severe problems of urban decay and social disruption in many cities across the peninsula. Whilst allowing unregulated and speculative sprawl and a proliferation of deprived peripheries and suburban towns, these strategies tended only to address ‘emergency’ issues while failing to meet the social and economic demands of the rapidly changing Italian society. 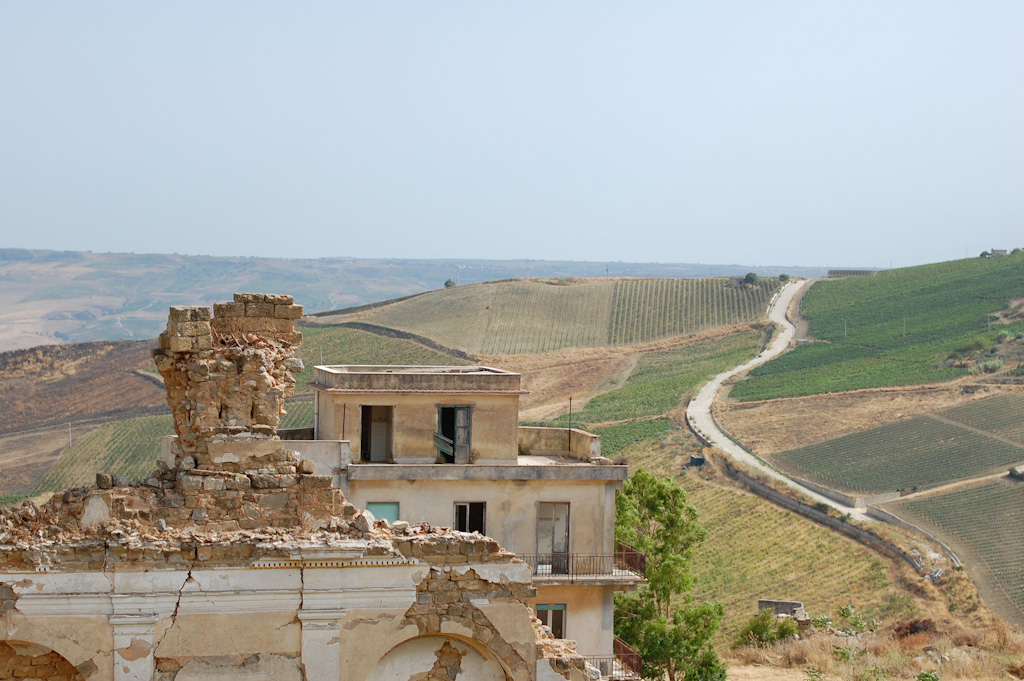 The Hills of Gibellina Vecchia.

Corrao opted for a different approach – and one which could be seen as prescient in its acknowledgement of the drawbacks of short-term post-disaster reconstruction, the results of which can be seen in places like L’Aquila and central Italy to this day. His idea was to promote a cultural renaissance through the urban reconstruction of Gibellina. The project was conceived as a showcase of modernity; a symbol of emancipation for a region considered by the rest of the country (and much of the world) as conservative and underdeveloped. The plan involved prestigious architects and artists, including Ludovico Quaroni, Franco Purini, Vittorio Gregotti, Alberto Burri, Arnaldo Pomodoro and Pietro Consagra. Meanwhile, it counted on the support of intellectuals from all over Italy to contribute to a laboratory of ideas on new forms of urban living. 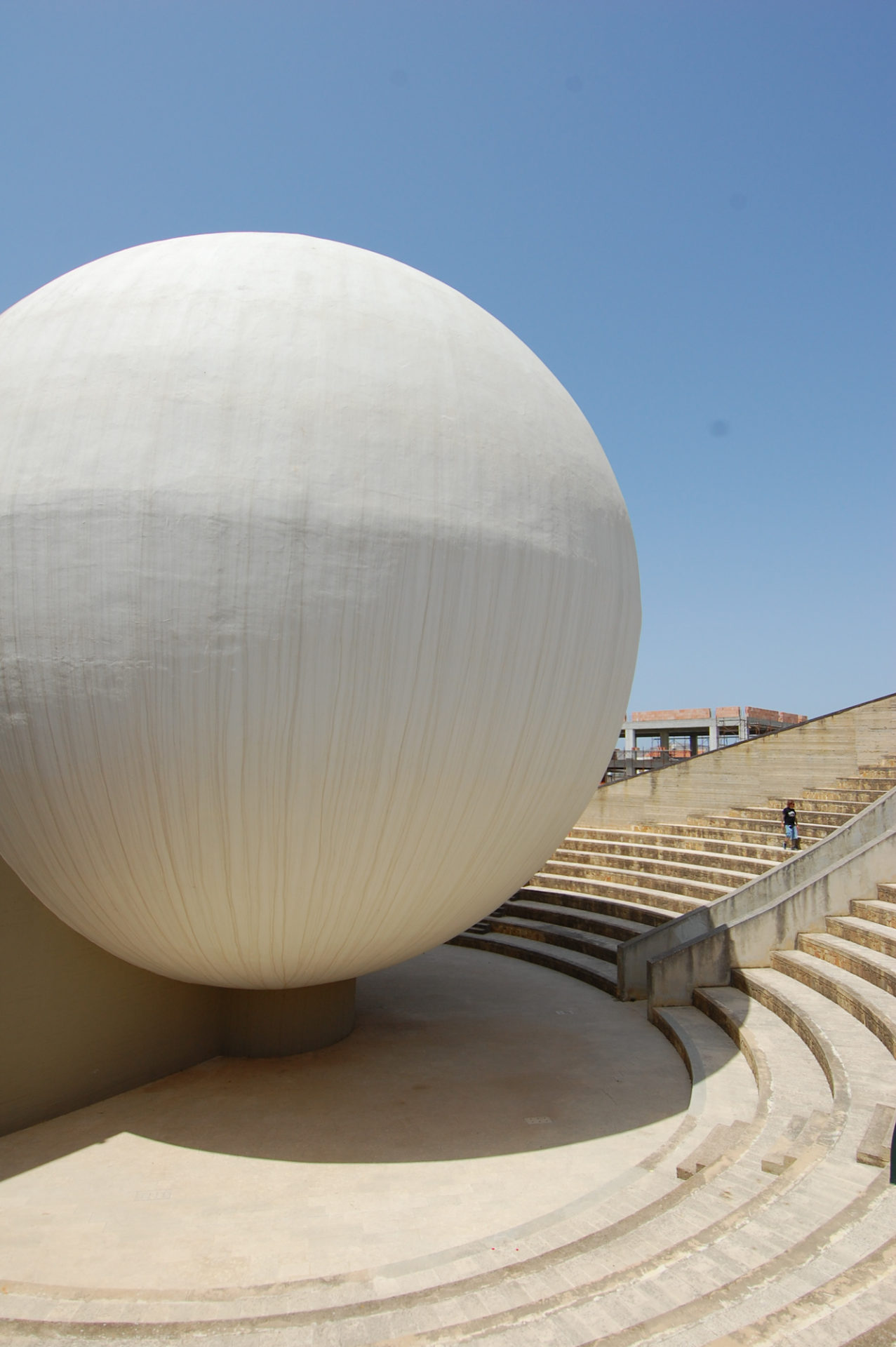 The new cathedral by Ludovico Quaroni.

Taking inspiration from the principles of previous utopian and futuristic cities, Gibellina Nuova was poised to become a centre of modern housing and infrastructures, where the diverse range of interventions was expected to be held together by a landscape of public artworks. Drawing on the aggregative and restorative power of public art, the city was also envisioned as an open-air museum. The message Corrao sought to put forward was that art could give a ‘soul’ to a city with no history, helping people forget about the shock brought about by the earthquake, while building a strong sense of community, attachment and belonging to the place. For this reason, the project for Gibellina Nuova was from the beginning based on a participatory approach, through which citizens would be involved in the realisation of artworks and in the construction of houses.

After almost a decade of complex bureaucratic negotiations and construction work (which is ongoing to this day), the former inhabitants of Gibellina moved into the newly fabricated city; a manifestation of one the most impressive Mediterranean urban utopias.

The making of a new city
Built 20km from the site of the old town (a decision already signifying a rupture from the past), the design of Gibellina Nuova follows the principle of symmetry and geometry. It is a butterfly plan, with the main axis representing the centre of the settlement, hosting all services, and wings on opposite sides occupied by residential areas. These factors alone distinguish the design of Gibellina from the organic and messy plans of other Mediterranean cities.

Yet, for all the sense in this urban planning logic, a mismatch between prescribed and actual uses arises when you experience the city first-hand. 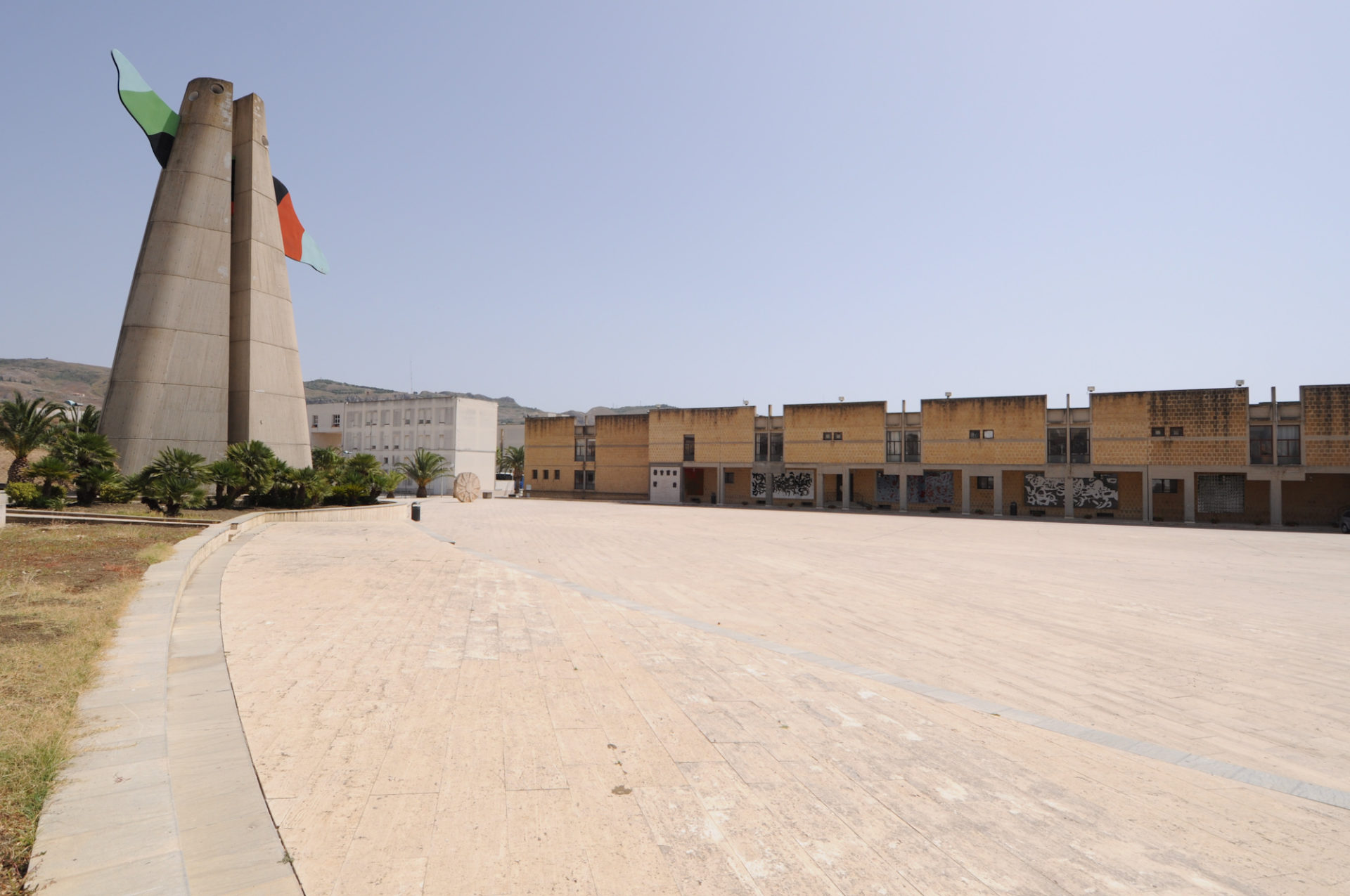 Walking the new city, one thing becomes immediately clear: it is built for a population roughly ten times bigger than its predecessor. While the town was designed to hold 50,000 people, less than 5,000 permanent residents currently live there. If we add to this the fact that many of the grand public buildings and much of the infrastructure remain unfinished because of public funding mismanagement and political corruption, the general sense of emptiness across the city should not come as a surprise. Walking amidst such massive and desert-like spaces, it was difficult not to draw parallels with the numerous ghost cities across China.

Beyond this, the new urban structure has clearly disrupted and transformed habits and social practices of the local community. Dispersion and grandeur have replaced the sense of proximity and human scale which had characterised the morphology of the old town. The new streets are four times wider than the old ones, inhibiting casual encounters and neighbourhood relations. Nor do these streets converge towards a centre; the traditional main square of many Italian towns, the place where people get together. Despite the fact that Gibellina Nuova abounds with plazas –the Sistema delle Piazze and its interwoven areas, Piazza Joseph Beuys, linking the (unfinished) city theatre and the cathedral, Piazza del Comune with the monumental Torre Civica – a static architectural landscape replaces the dynamic human interaction that should animate public spaces. In place of a strong urban centrality catalysing social life, a geometric street grid fades into the countryside, leaving the town with an unfulfilled polycentric dimension.

Furthermore, the typology of the new dwellings, with the front garden detaching the house from the street, separates neighbours even further from one another, changing the habit of front door, street socialising, and instead fostering isolation and segregation of uses. 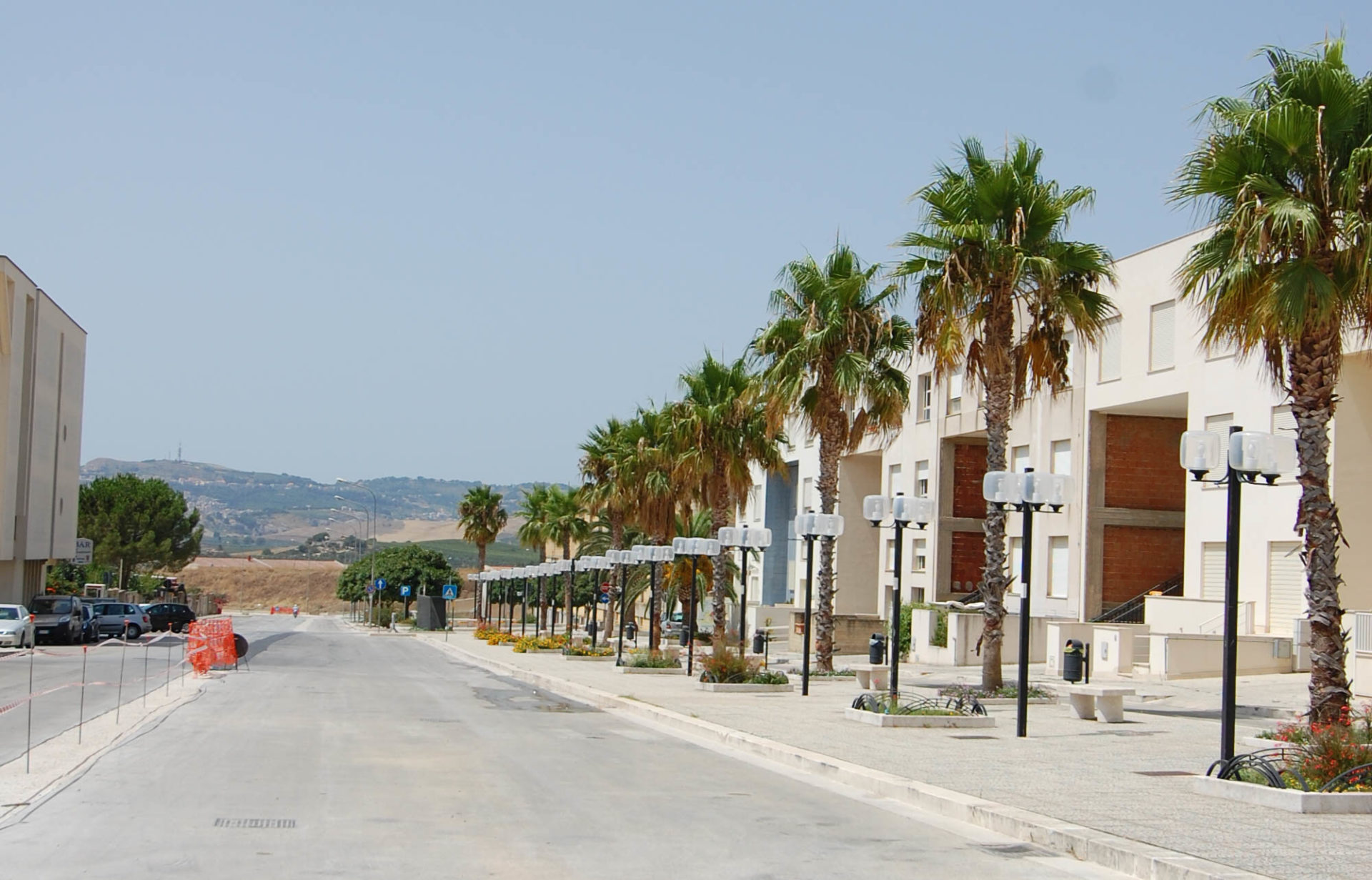 This mismatch also extends to the artscape of the city, whose diffuse exhibition of sculptures attracted mostly unconventional tourists and lovers of off-site attractions. Few locals understood the connection between the artwork and the reconstruction of the city, despite the fact that artists and inhabitants closely collaborated in their realisation. The attempt to initiate a participatory process remained limited to the passive involvement of the population in workshops and activities organised by the artists. Indeed, rather than fostering active engagement for the co-creation of the artistic landscape and the city, the institutions washed their hands of their responsibilities, leaving the artists to try to fill the gap. As if to shorten their distance to the artworks, the first generation of residents named them “i pupi”, after the traditional Sicilian marionettes, in an attempt to familiarise themselves with this otherwise alien landscape of sculptures. 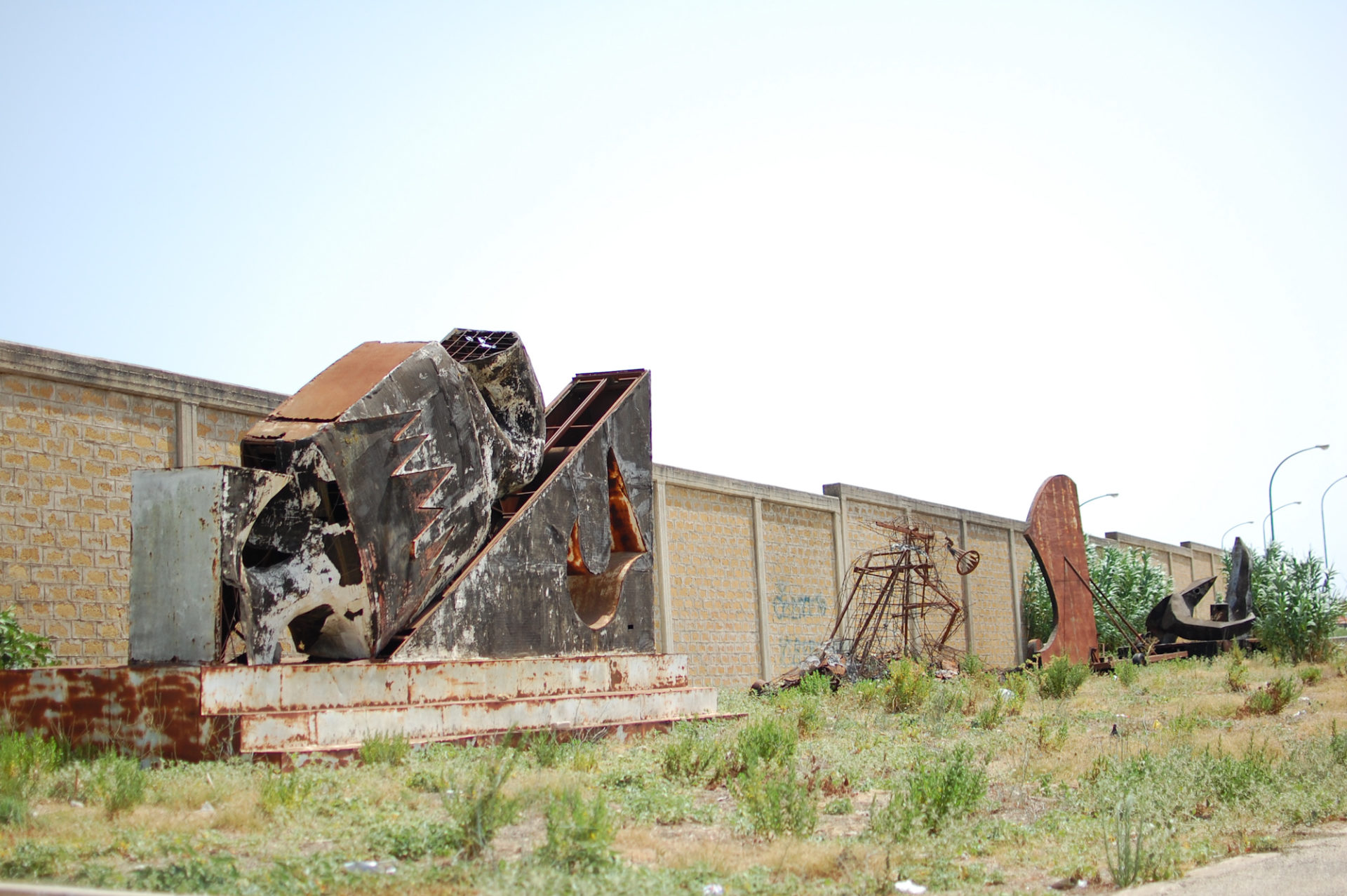 In this light, the artworks clarify what the architecture embodies: a character whose exhibitionism trumps its utility; the unfinished theatre mimics the varying and often contradictory development of the city: oversised and unfinished. Once again the vision for the city follows abstract and form-driven codes — like the composition of a painting — but ignores the social dimension of spaces.

On a wider scale, one particular major artscape encapsulates the ambitions of all other art projects in Gibellina Nuova. A meta-city in the form of land-art, one of the largest in the world, completes the vision of the ideal cultural city. The Cretto, by artist Alberto Burri, spans 12 hectares of concrete cast covering the ruins of the old city. The blocks, just over one meter in height, occupy the areas where buildings once were. The trace of the street network is preserved for people to walk and navigate through the sculpture. The intention is clear: giving a spatial dimension to the collective memory of the old city, turning a place of devastation and pain into a work of art. 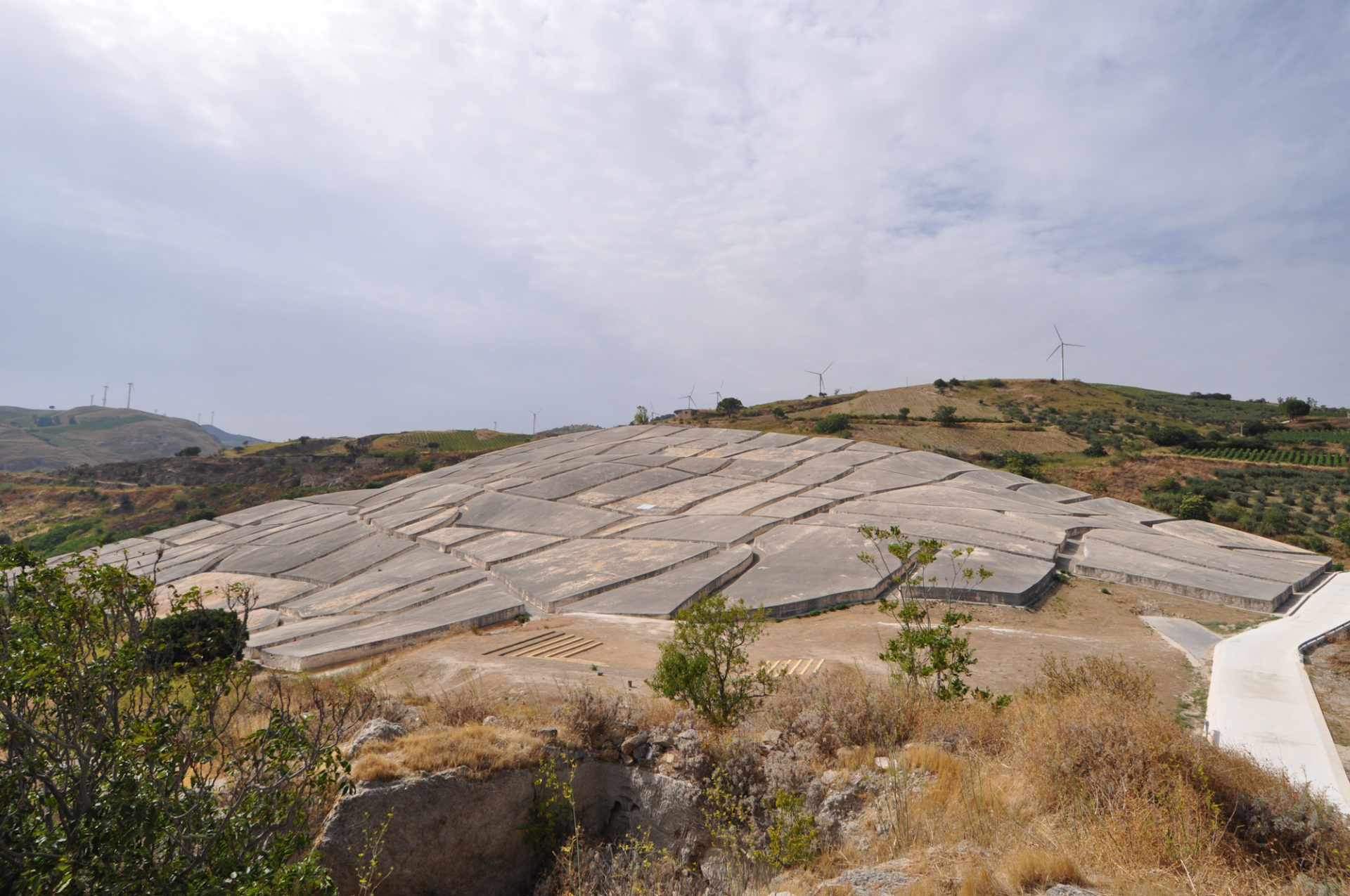 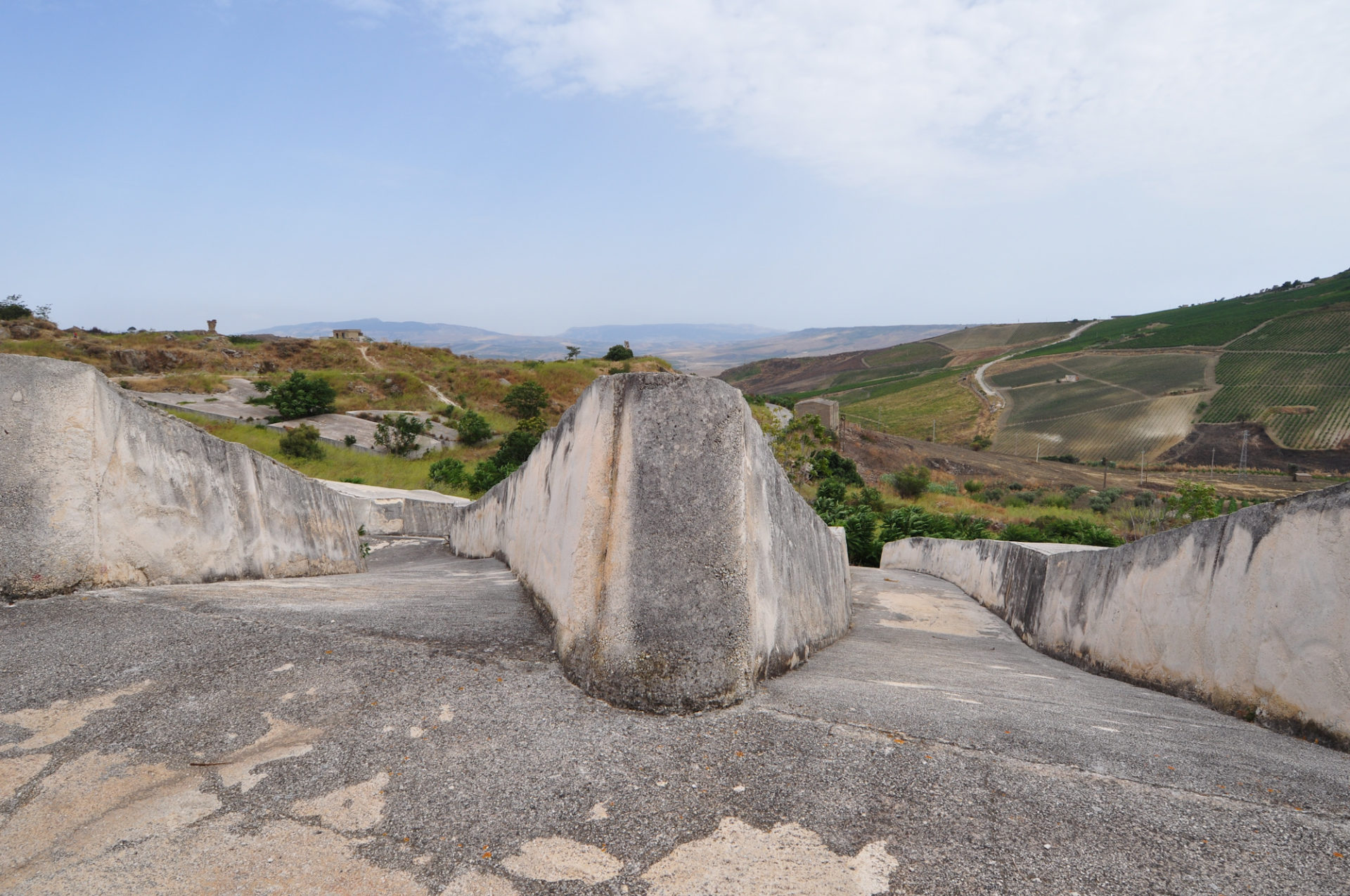 Unmistakably, what the Cretto and Gibellina Nuova have in common is silence: the first is a city forever captured under a shroud of cement, ‘archaeology of archaeology’ as a reminder of the past; the second is a cemetery of houses, squares, monuments and unfinished infrastructure.

Future Gibellinas?
The rebuilding of Gibellina Nuova raises many questions regarding utopian architecture. Does the unfinished reconstruction echo the failure of rational, top-down planning? Is Gibellina Nuova built for an abstract society of appearance, where territory serves art and not vice versa? In the gaps left by a physically erased past, can a new identity be so easily fabricated by urban design?

With its futuristic ambitions and rational beauty, Gibellina Nuova doesn’t have the ingredients for a complex city life: small streets encouraging chance meetings, mixed and overlapping uses against prescribed functions, integrated thoroughfares in contrast to segregation of pedestrian and vehicular traffic. But for all the shortcomings of utopian over-planning that were clearly observable in my stroll, something else caught my attention.

Inhabitants have made Via Indipendenza, an ordinary street close to the residential areas and not far from the deserted town hall square, their social hub. Here the elderly have recreated their leisure clubs. Bars have taken over empty buildings. Young boys have transformed desert squares into improvised football pitches and playgrounds. 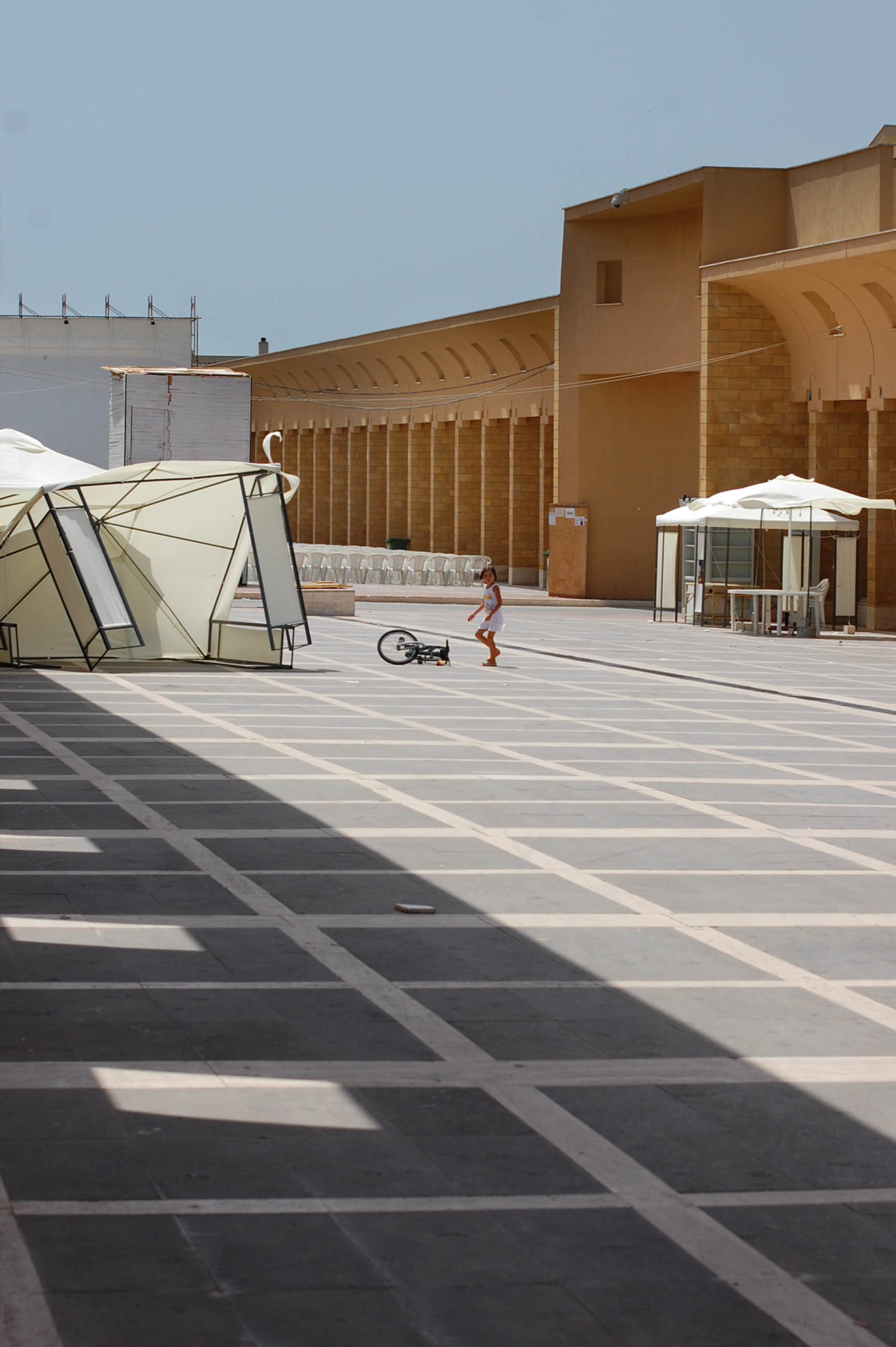 Despite the many failures of Gibellina Nuova, the local community demonstrates a remarkable human persistence. Inhabitants have managed to bend the city to the habits and needs they took with them from the old town, showing that there is room for appropriation and reinterpretation, even in the most artificially fabricated of places.

As I drove under the star-shaped portal at the edge of Gibellina, leaving the Sicilian countryside to return to the urbanised coast of Palermo, I became aware of the broader lesson provided by my urban walk. In the obsessive relationship that Sicily has with the sorrowful principle of stasis and decadence, Gibellina’s example is crucial to understand how people-centred and socially-aware design – where utopia meets contemporary pragmatism – are essential to foster processes of place-making in new settlements. 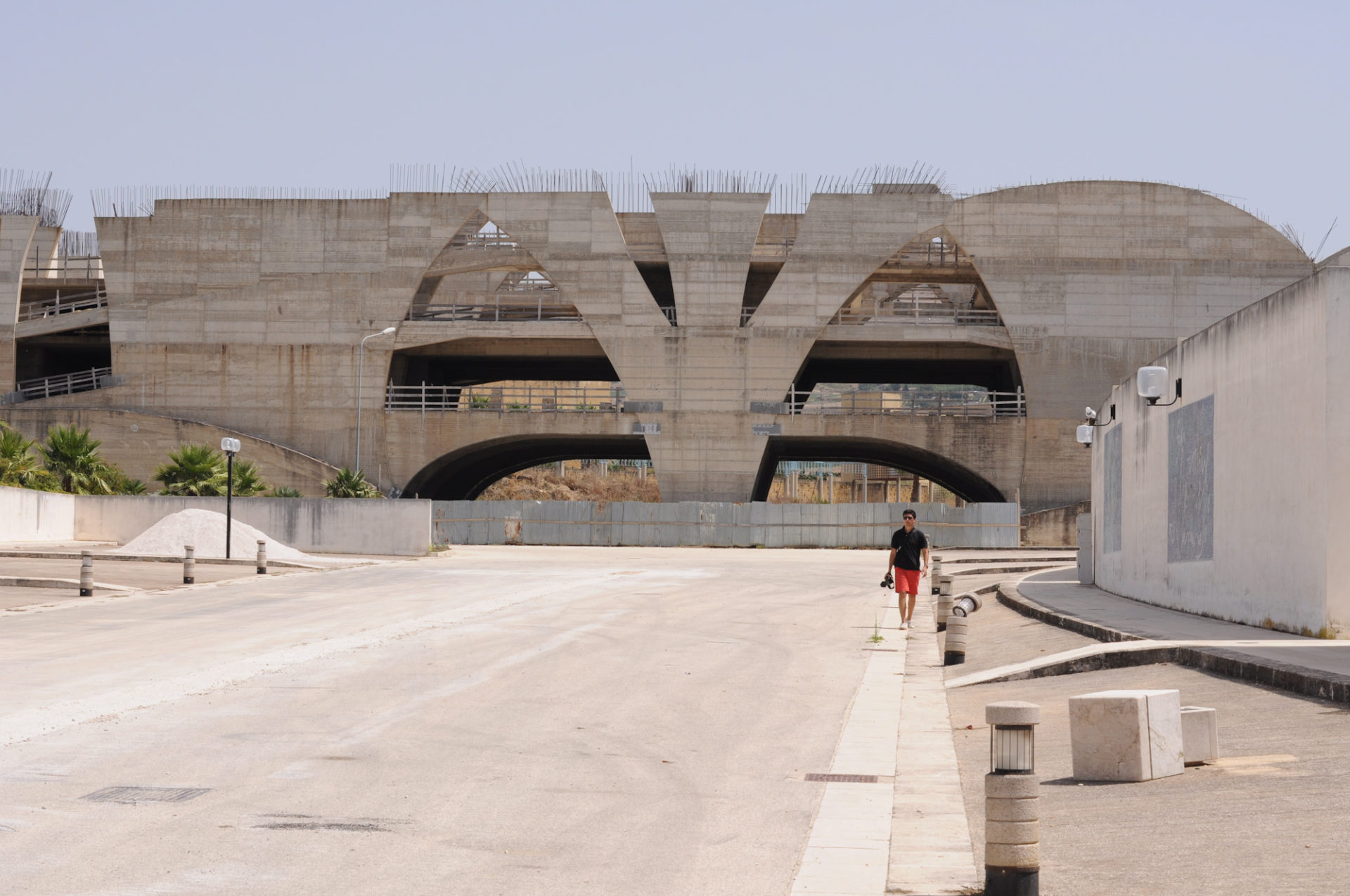 Claudia Sinatra
Claudia is an architect, urban designer, researcher, flaneur and photographer. Interested in deciphering the relationship between physical and social phenomena within the urban realm, she focuses on themes like spatial appropriation, informal practices, and other factors shaping urban development and planning. She currently lives and works in Zurich, Switzerland.