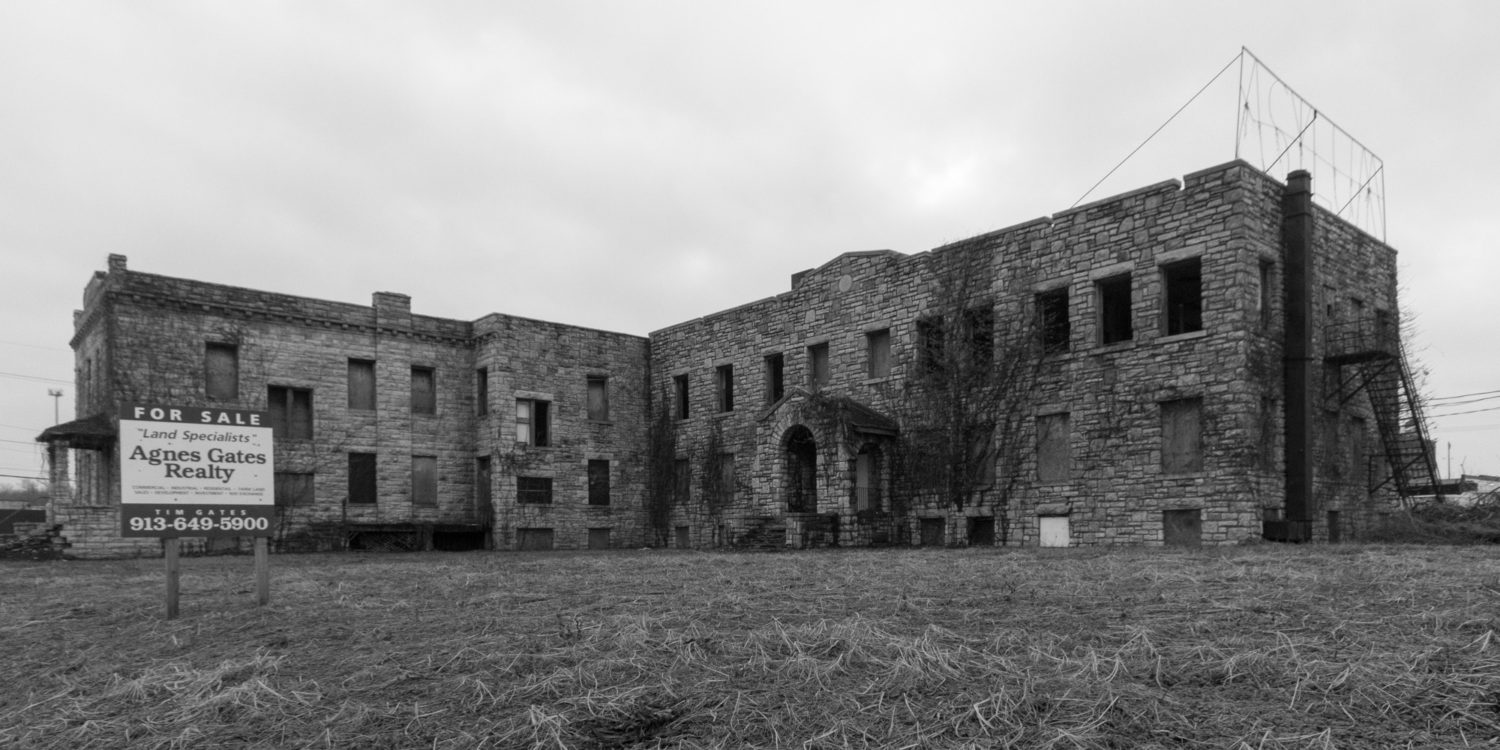 Benjamin Busch in conversation with economist and amateur historian Michael Adams about the legacy of now-ruined Wheatley Provident Hospital in Kansas City, Missouri.

Many historically African-American neighbourhoods across the US have fallen into disrepair, with buildings being neglected, abandoned, and razed. The 18th and Vine District in Kansas City, Missouri, whose enduring ruin of Wheatley-Provident Hospital has much to say, is no exception.

Dedicated in 1918, a time when African Americans were largely excluded from medical care and training, the hospital was the first in Kansas City to employ and train black medical professionals and also treat black patients. It shuttered its doors in 1972 and has since been used as a haunted house attraction — the word ASYLUM stands atop as a souvenir — before falling into complete disrepair. It has recently served as an informal refuge for homeless citizens. 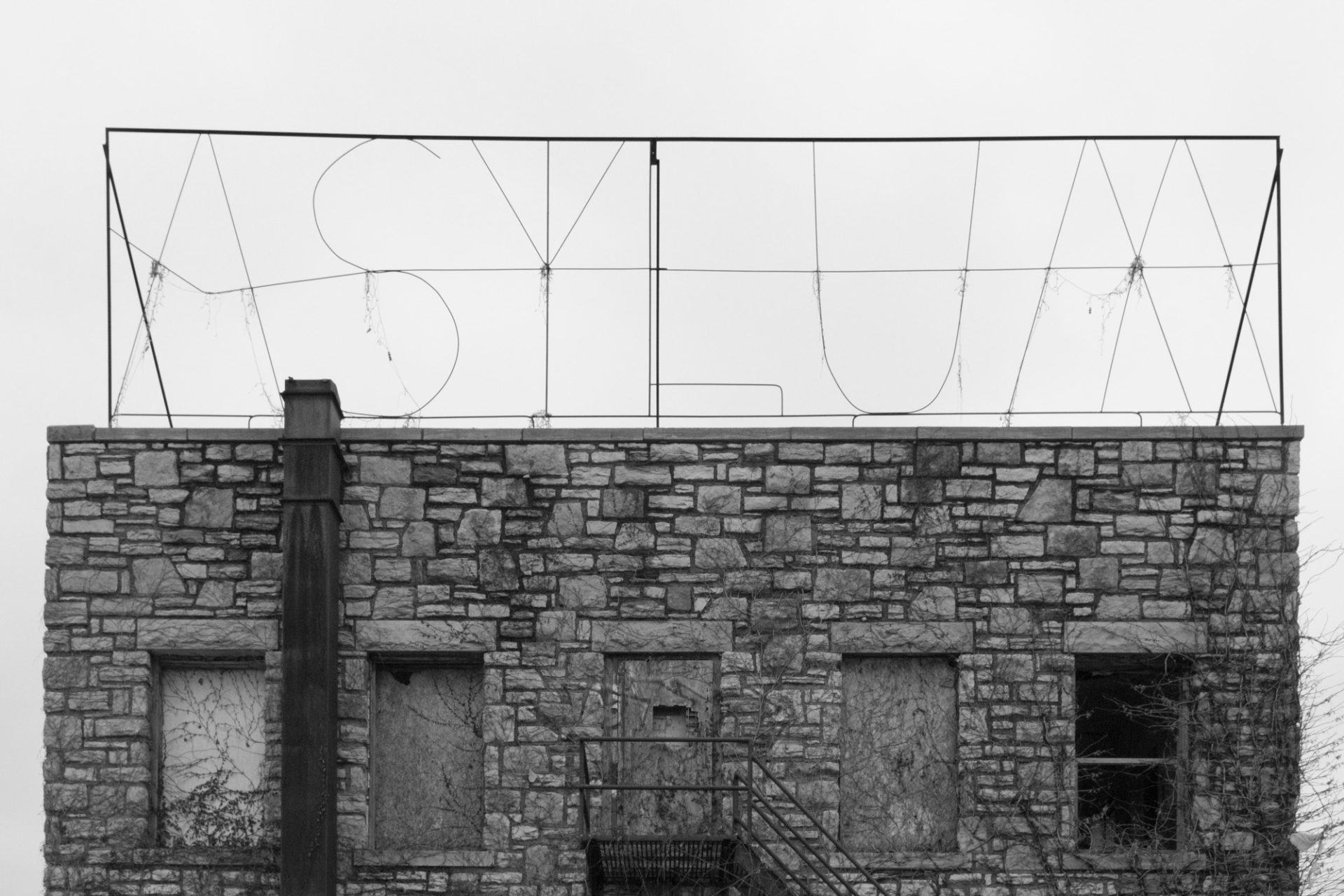 The sign which serves as reminder of the hospital’s subsequent function as a haunted house.

In an effort to save the building from demolition, Wheatley-Provident Hospital was added to the city’s Register of Historic Places in 2007. Whether or not it is restored to its former glory, the building remains a monument to the community that founded it.

Architect and artist Benjamin Busch, who is currently studying spatial strategies at Weissensee School of Art in Berlin, recently caught up with Michael Adams, a Kansas City-based economist and amateur historian/genealogist, whose current area of interest centres on Missouri’s African-American community. Zeroing in on the Wheatley Provident Hospital, their discussion revolved around the indirect role Civil Rights legislation played in its eventual dilapidation.

Benjamin Busch: After WWII, the US experienced a huge shift of industry from producing weapons to producing automobiles and consumer goods for its citizens. This shift completely changed the landscape of the US. Considering its historical context, I’m tempted to attribute Wheatley-Provident’s current ruinous state to post-war white flight and the freeway construction that enabled it. Not only did freeway construction make suburbanization and the subsequent impoverishment of the urban core possible, it also forced people out of their homes and severed established communities.

Michael Adams: I think white flight and freeway construction have ultimately less to do with Wheatley-Provident’s undoing than an idea I’ve been exploring: that integration and the Civil Rights Movement hastened the demise of America’s black communities.The success of the hospital—and local black communities like Vine Street, or on the Kansas side Douglass-Sumner and the black professional community of Turtle Hill—was an unintended side-effect of segregation.

Those communities benefitted from having their professionals constrained within them, by law or custom. The two Kansas Cities were supposedly more egalitarian in the social stratification of their black citizenry; you wouldn’t find it strange to see, for instance, doctors and lawyers living on the same block as brick-layers and barbers. In other cities, where black populations had been freer for a longer period, the middle class clustered together more tightly and were generally more endogamous, i.e. doctors married other doctors, educators married other educators, etc.

When the Civil Rights legislation of 1964 was enacted, the African American upper and middle classes migrated en masse to the suburbs to partake in those new-found rights, thereby sounding the death knell of these black communities. 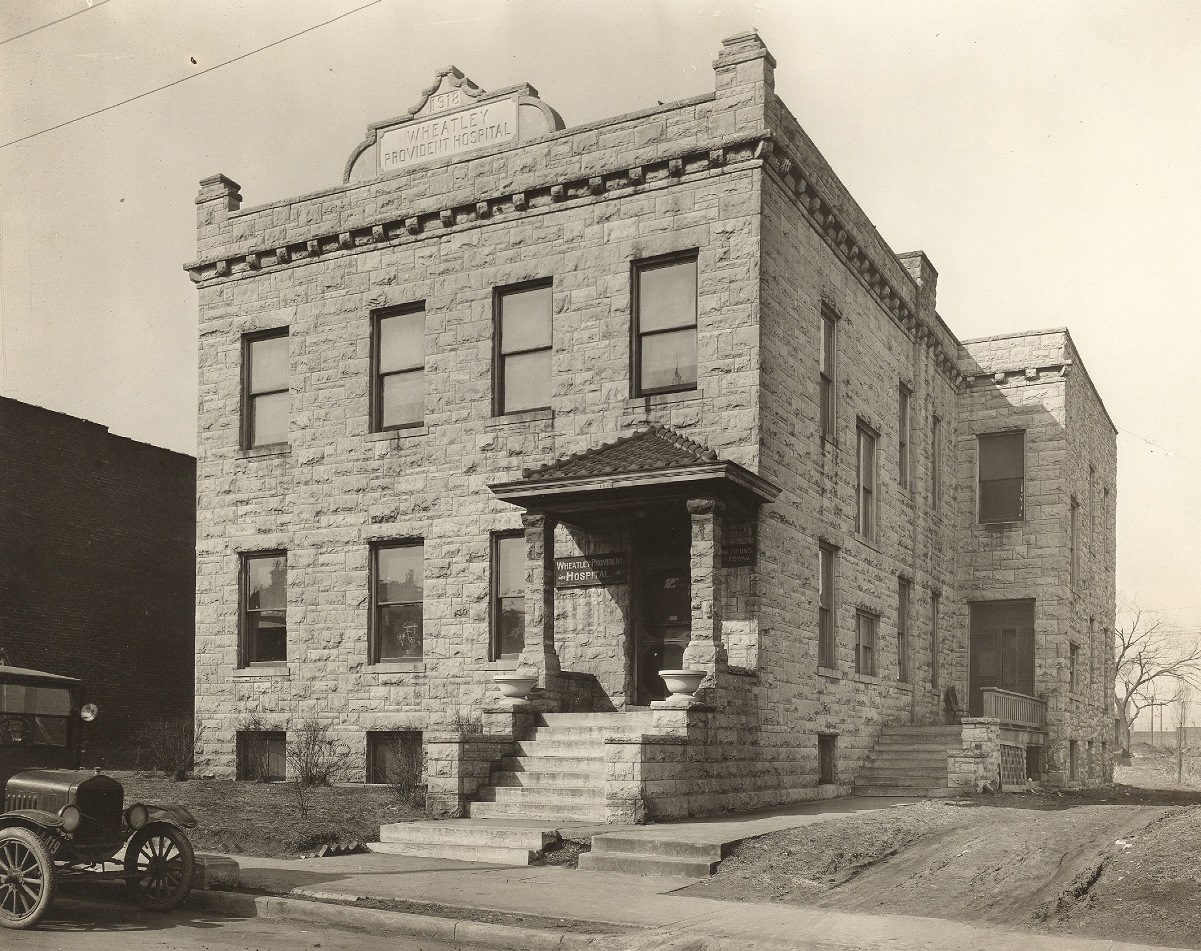 The Black Archives of Mid-America, Inc. 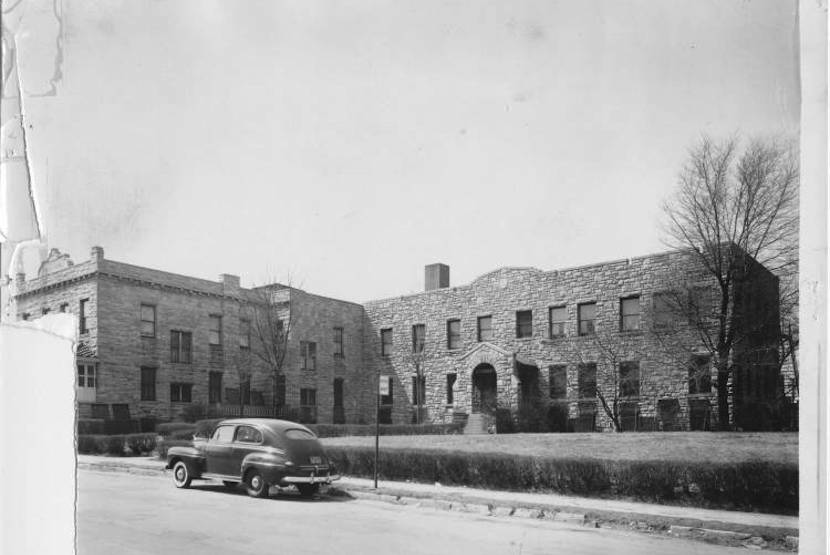 BB: That’s a pretty incredible statement, that the Civil Rights Act may have been part of Wheatley-Provident’s demise. It highlights the material importance of community solidarity, even if it arises out of necessity in the face of alienation and outright exclusion. The economic engine of the community was lost, and with it undoubtedly a greater aptitude for community involvement.

Looking back from today’s perspective, it appears that the success of Civil Rights legislation still depends on maintaining integral community resources, or “collective liberties” — access to education, healthcare, housing, transportation, even safe drinking water — as much as it depends on securing “individual liberties” — such as freedom of movement. Those community resources, while theoretically available to all citizens, are disproportionately accessible to wealthier, white communities over communities predominantly comprising people of colour. Civil Rights legislation supposedly levelled the playing field, but in reality the scales were tipped. African-American communities doubly lost support from philanthropists and the government, whose investment in community resources depends substantially on taxation of (especially) higher earners.

MA: Correct. Black communities in general lost a lot of human capital after the Civil Rights Act happened. To reiterate, African Americans were typically forced to stay within certain communities, and when they suddenly weren’t forced to stay within those communities, the middle class left for more established institutions, colleges, organizations, neighbourhoods, and so on, which they had been previously excluded from. 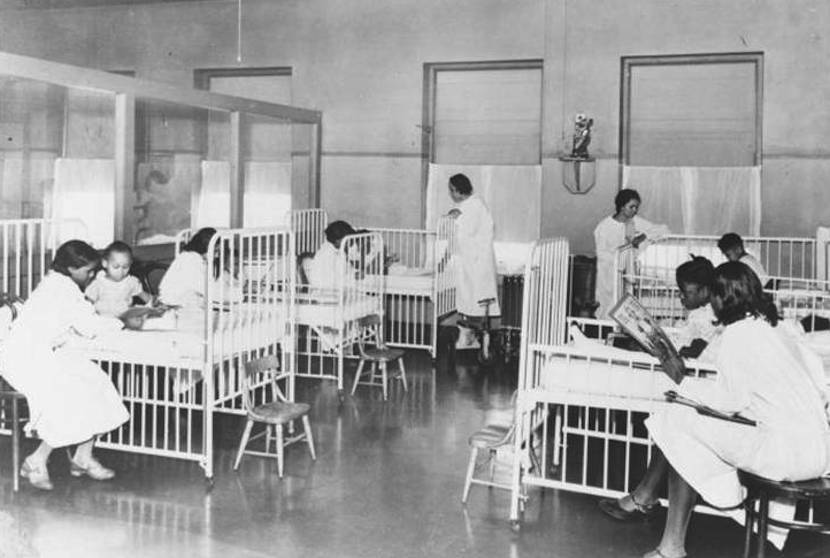 Interior view of children in cribs and attendants. 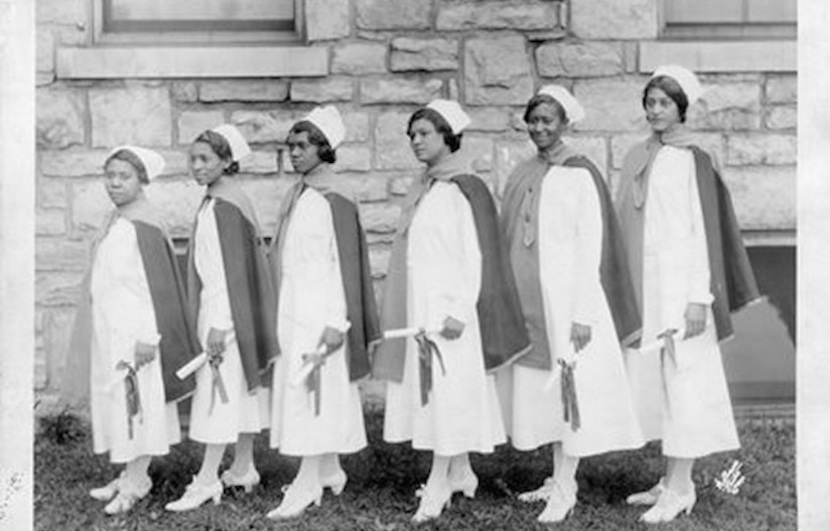 The Black Archives of Mid-America, Inc.

BB: With that in mind, we could see the ruins of Wheatley-Provident as physical evidence of systemic violence against vulnerable minority communities. The hospital, as a ruin, is an expression of that implicit, systemic violence as opposed to an explicit form of violence, as you would see in wartime or police brutality.

MA: It’s a form of neglect; in the case of the hospital, for the African-American community. You see purposeful neglect of minority communities all around the world, where minority landmarks are abandoned to the point of ruin. I think it is indicative of a particular — not violence — but I would term it “neglect”.

BB: Should we see neglect in relation to other communities that are not being neglected? How do we understand neglect?

MA: Neglect in the sense that monuments and points of interest are not being well taken care of. Echoing this conversation, I just heard an interview on NPR with historian Free Egunfemi, who lives in Richmond, Virginia, and she was talking about the African-American community there, and the neglect that is taking place; blacks have been there for hundreds of years, and little if any remnants of their past remain. 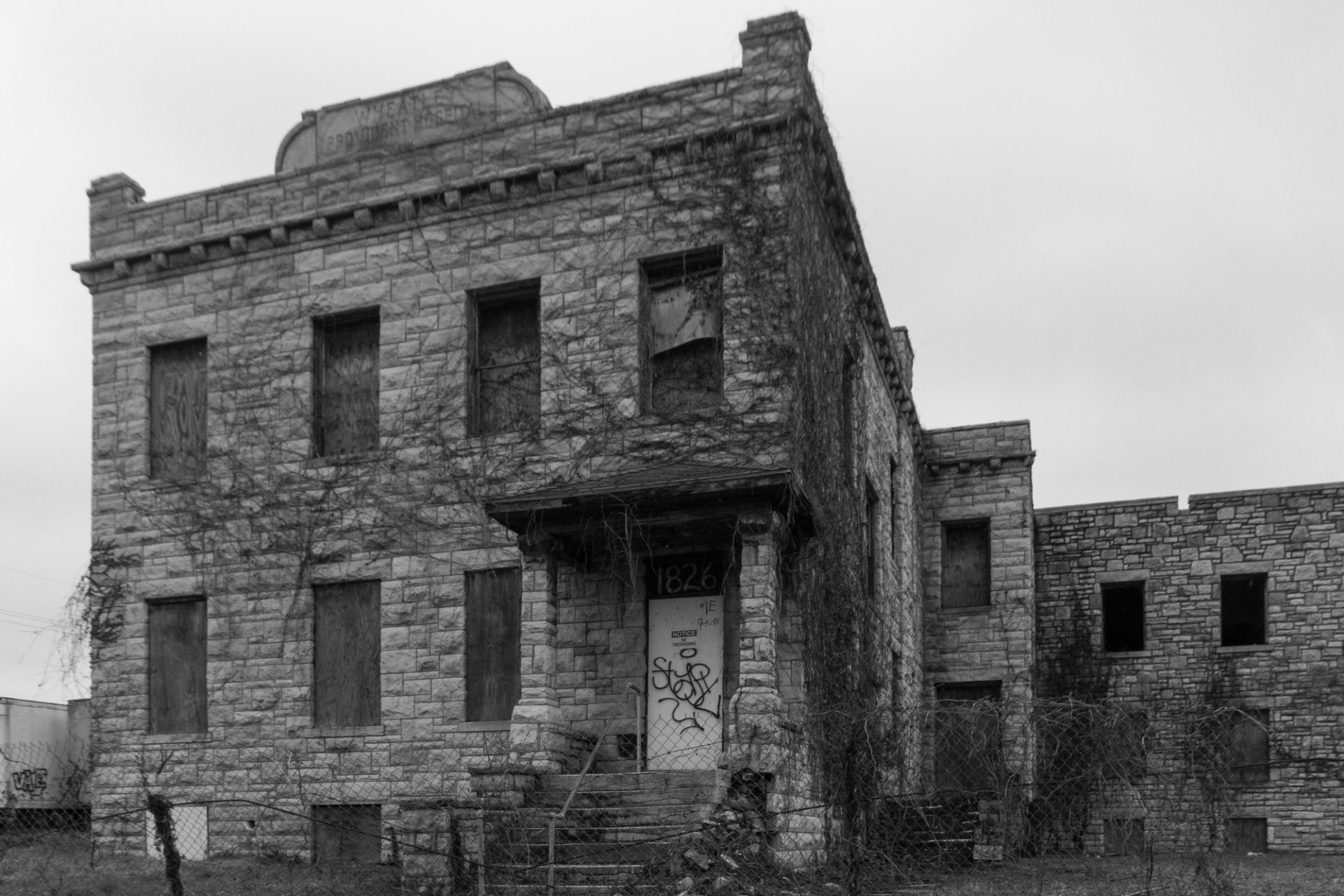 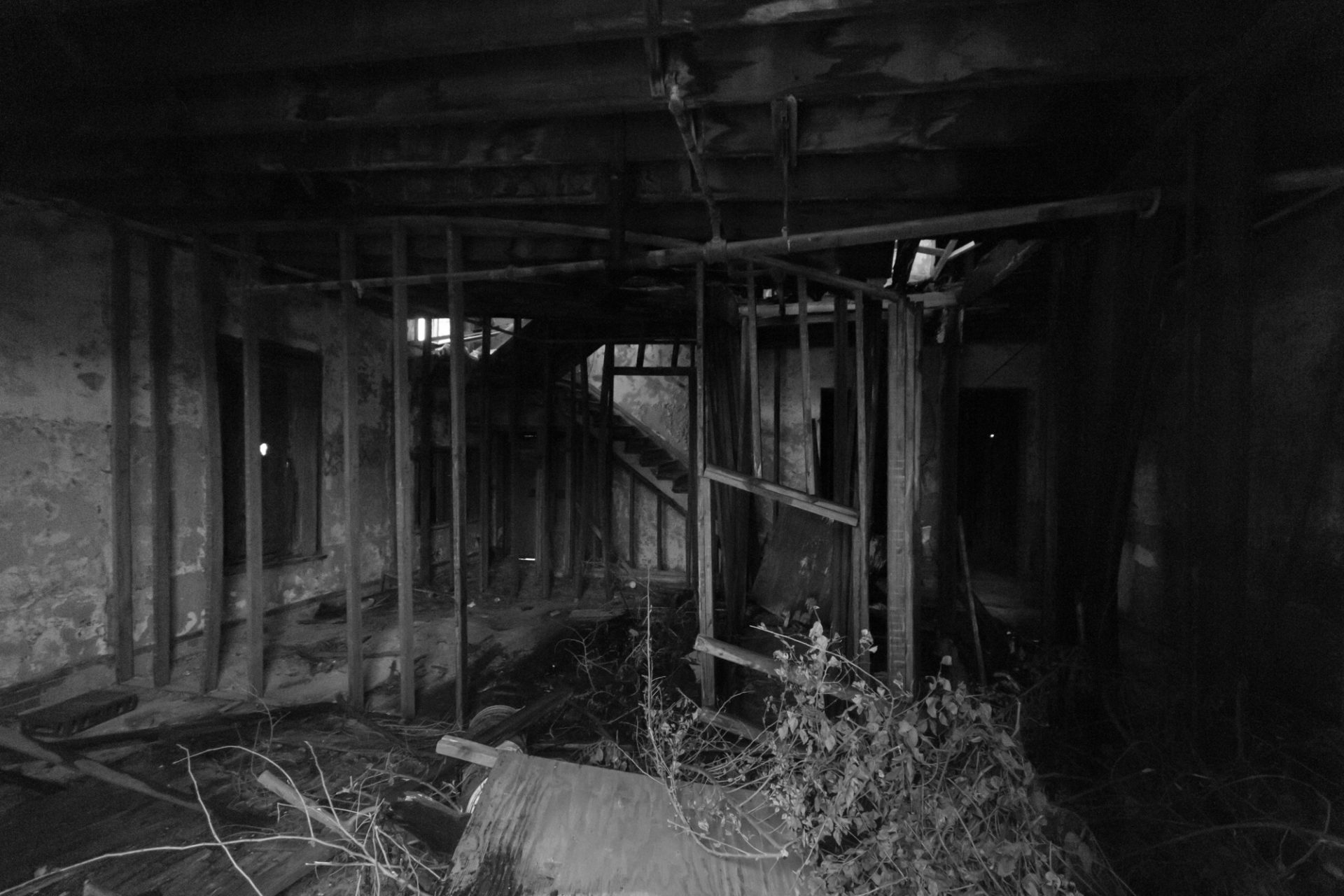 BB: You could say that the destruction of monuments has something to do with a change in their visibility. After 1964, many members of the black community who would invest in maintaining monuments or building new ones stopped seeing them in their everyday life; the monuments fell out of visibility. In that way, monuments like Wheatley-Provident became ruins not only by lack of maintenance but also by lack of visibility.

Your family was involved in the day-to-day operations of the hospital. Do you remember anything specific from their stories?

BB: As a private hospital, Wheatley-Provident emerged out of a necessity for what we could call “equal opportunity” employment and training as well as quality medical services that the segregationist state would not provide. It was a self-organized effort for better service, which illustrates both positive and negative aspects of the community’s history.

It’s really unfortunate that this history is lost, that Wheatley-Provident as a ruin doesn’t seem to represent any of that rich history outright. We’ve even seen it being used as a commercial haunted house, which is very much separated from its original use.

MA: But you know, now, I would rather it be used as a haunted house, or anything really, than it lying there in ruin; a lot of people don’t know about the hospital.

BB: Perhaps, then, the first step is to restore the building’s visibility. We could make a project out of it, restore the building, even put a museum inside it, but as a ruin, it already demands to be seen. Broken, crumbling, overcome by nature, it screams silently at passersby: history’s struggle persists.

Benjamin Busch
Benjamin Busch is currently researching critical modes of architectural production within the field of spatial practice. Treating architecture as a symptom of abstract processes, his artwork and writing investigate complex fields of relations within the built environment.
Michael Adams
Michael Adams is a Kansas City-based amateur historian/genealogist whose current area of interest centers on Missouri’s African-American community. His interest in Wheatley-Provident and its rehabilitation stems from his great-grandmother Clara’s role in its founding.

add comment
Griffin Tomassi
I just want everyone to know this is a very old historic place and trespassing on property like this can be detrimental. Hopefully one day we can walk this hospital not as trespassers but as tourists.
Christy
Is this place still standing
Related