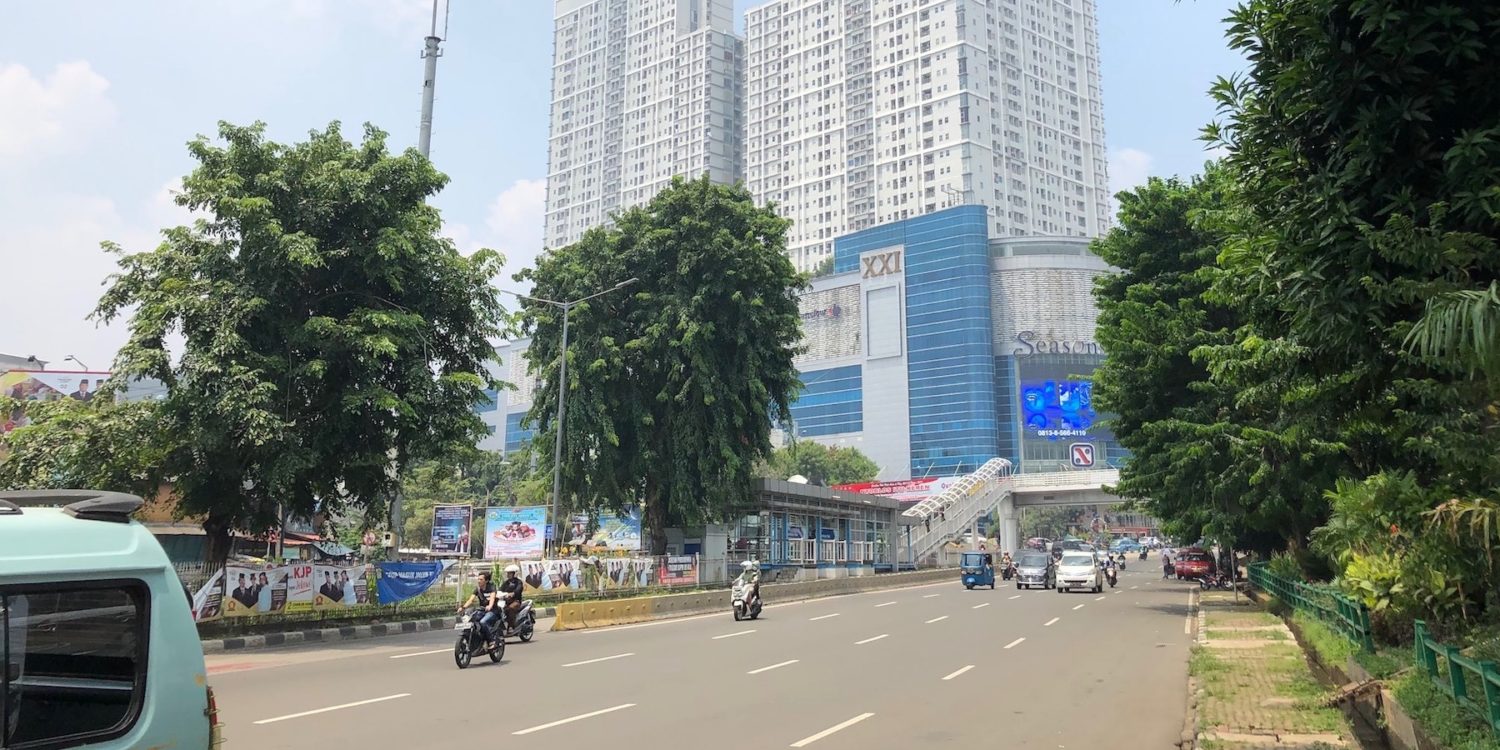 In Indonesia’s sprawling capital, property developers are reimagining an old urban form, and ideas of nationhood to go along with it.

Along the coastline of North Jakarta, seawalls are under constant construction. As the Java Sea rises, the twin pressures of anthropogenic climate change and a construction industry in acceleration are, quite literally, sinking the city into the marshland beneath it. But in Jakarta, building walls is nothing new.

From the fortified and securitised environments of early Dutch colonialism to the construction of privatised gated-estates in the city’s urban fringe in the 1980s and 1990s, walling and the enclosure of people and wealth are recurring features of Jakarta’s built form. However, unlike the mercantilist storehousing, colonial military infrastructure or residential estates of the previous three hundred years, since 2006 a very new form of urban separation has emerged in the city: the integrated-superblock.

Enormous and exclusive, the superblock sits at the intersection of the office, the shopping mall and the home. They tower over the largely single or double-storey neighbourhoods around them and are stark and imposing expressions of the city’s significant, and still growing, inequalities. But superblocks did not appear from thin air. They are a product of a series of late-20th and early-21st century changes in Indonesia’s political economy. 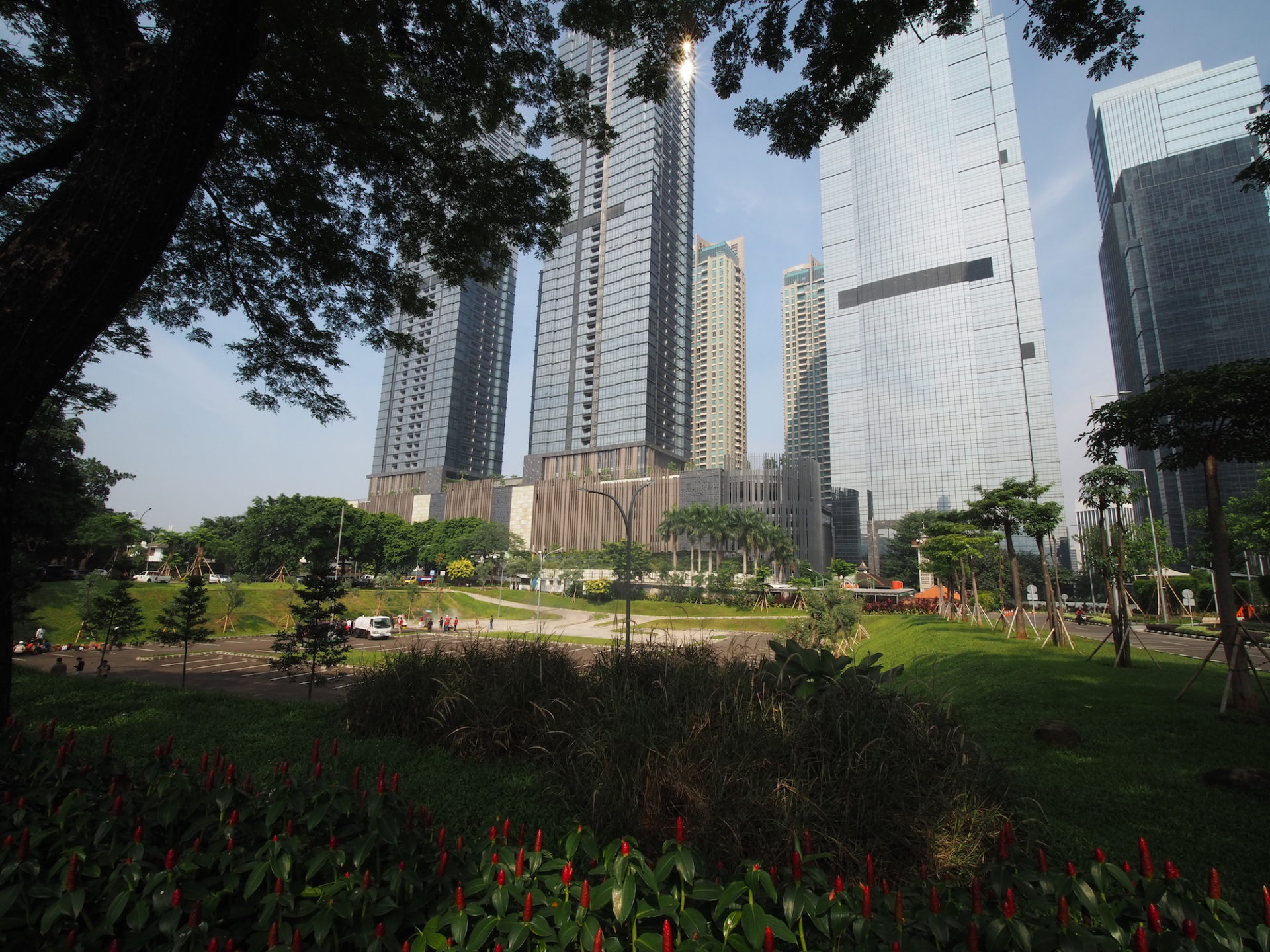 All photos by the author.

Since the early 1970s the authoritarian New Order regime had enjoyed the performance legitimacy of an immensely profitable state-owned oil industry. By 1983 a series of oil shocks had plunged the country into economic crisis. As the oil industry collapsed, the collection of patronage associations that made up the New Order found themselves financially stranded.

In response, these groups began rearranging how power networked in the Indonesian economy. Banks were deregulated, privately managed export markets were encouraged and complex coalitions between private business and the state emerged. This tangled web of bureaucrats, business people, regime officials and local political activists changed how Indonesia’s economy functioned. Financialisation became the main game in town and a handful of individuals became astonishingly rich by transforming Indonesia’s urban areas into a series of sites designed almost exclusively for the creation of wealth.

Looking for places to bank this newfound fortune, many New Order oligarchs became property developers and began constructing privatised ‘new towns’ in the outskirts of Jakarta. Gated, filled with golf courses, polo and equestrian areas, and prohibitively expensive, these exclusive residential zones were constructed in the image of Western garden cities with several modeled explicitly after perceived prestigious or fashionable areas in the United States and Europe. 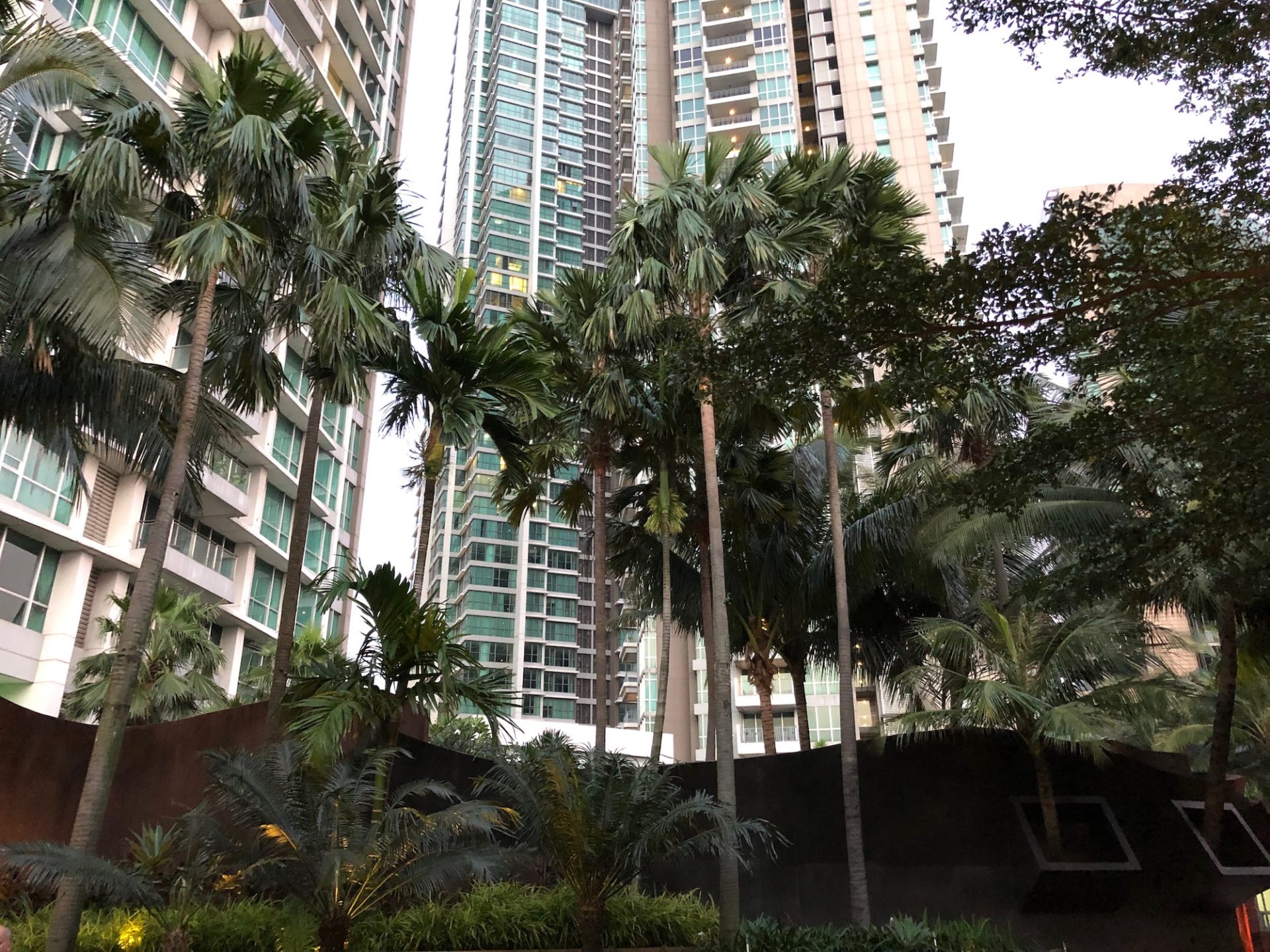 The new estates were positioned as recessed sites for fresh thinking about what it meant to be a resident free from the nuisances of life in the big city. The sheer amount of money required to move into these developments also allowed perceptions of city life to become disembedded from the everyday messiness of social interaction. Walls now incubated economies in miniature, designed strictly for the transfer of capital between other comparably wealthy residents.

But by 2001, things had changed. The rupiah’s massive depreciation during the 1997 ‘Asian’ Financial Crisis, an IMF led fire sale of inner-city land following the 1998 democratic transition and the collapse of government underwriting for developer groups had complicated the business environment. Construction costs soared in the post-1998 years and consumption went through a prolonged slump. Investment in new towns fell substantially. Yet the experience of constructing exclusionary projects in the city’s outskirts remained lodged in developers’ minds. Separation had become a selling point. 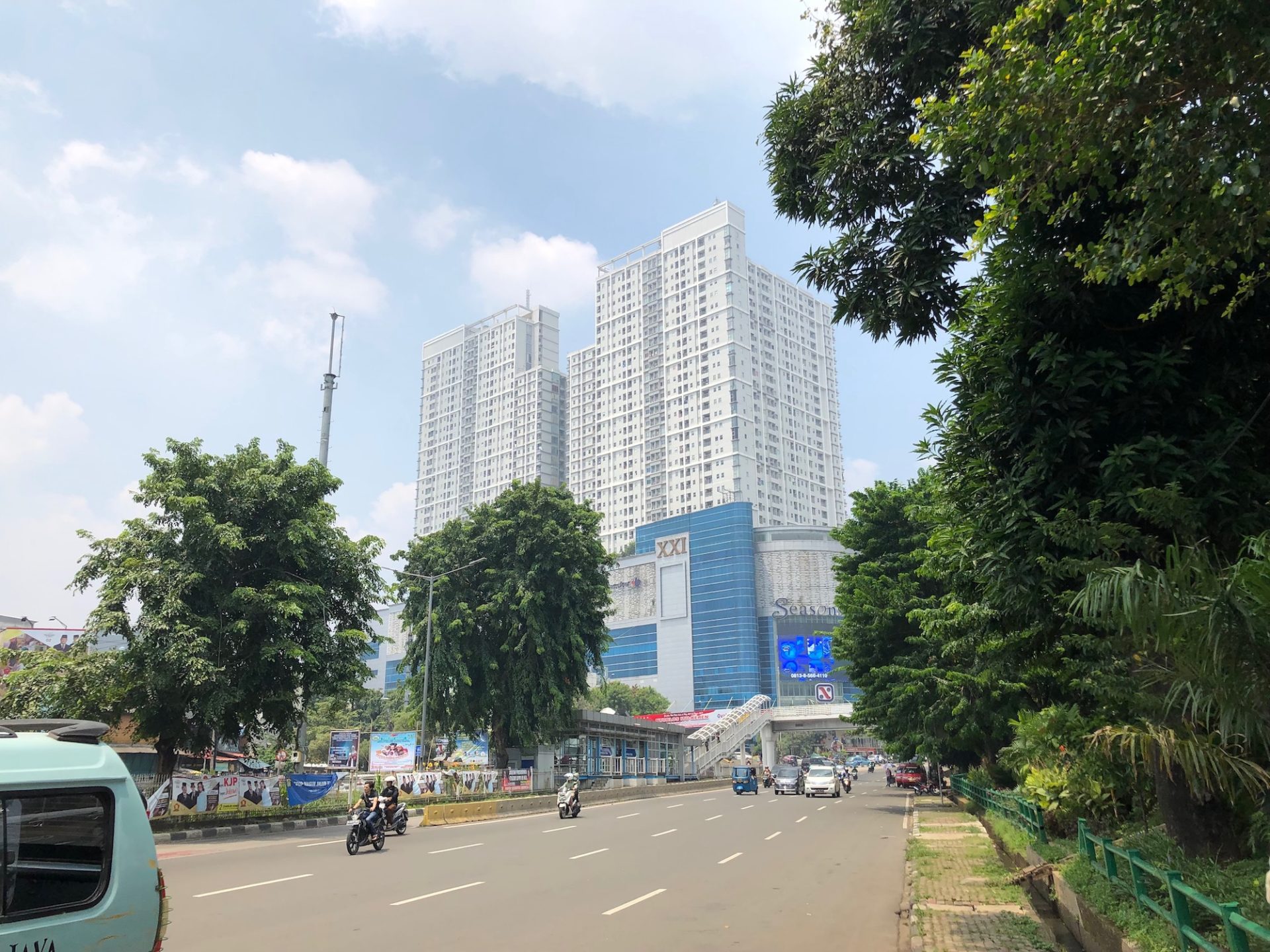 Rather than a slow and steady recovery of the property industry, from 2006, but seemingly overnight, almost the entirety of central-Jakarta became a construction site.

Pinning down the reason for the sudden resurgence of property development in the inner city is difficult. Almost every observer of this period has a different take on what occurred. Architectural historian Abidin Kusno has speculated that the ‘return to the city’ could have been driven by Jakarta, as the political and economic center of post-New Order Indonesia, ‘centralising [domestic and foreign] capital as part of market driven phenomena’. Living in the new towns was inefficient for people working at companies in the inner city and so new, more central, accommodation became essential. Others have pointed to renewed investor confidence that the state no longer had the legislative ability to repossess land and so large investment into built structures was relatively safe.

Crucially however, the property market in the immediate aftermath of the democratic transition was heavily liberalised, subject to extreme property speculation and ensnared by the continuation of New Order-connected oligarchic control. Appropriation and rent-seeking was aided by the creation of a state managed, but IMF directed, financial crisis response organisation: the Indonesian Bank Restructuring Agency (IBRA). IBRA was a significant financial vehicle in Indonesia through the early-2000s and existed with the sole mandate of stabilising the business environment and returning money to government coffers as quickly as possible. To do so, the bank bailed out over 70% of underperforming loans given to property developers by the New Order, offered debt restructuring packages to well-connected developers and auctioned off state-held property in the inner city for next to nothing. This amounted to a recapitalisation of privileged developer groups and a government-sanctioned transfer of land from collective to private ownership for effectively no public gain. 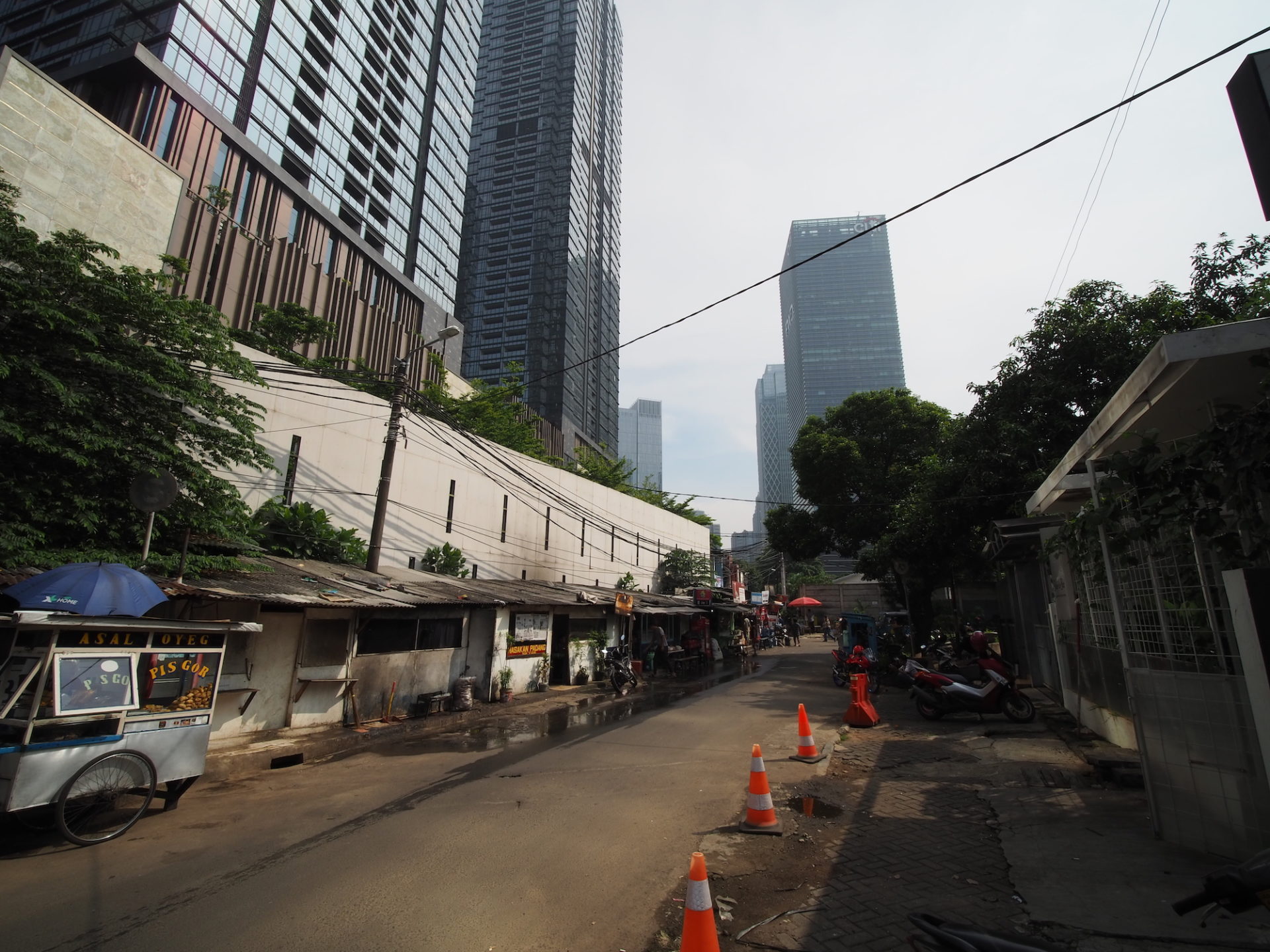 The answer for why superblocks appeared probably lies in a combination of these post-democratic transition shifts. At the end of the IBRA period in 2004, developer groups found themselves in possession of prime inner-city land and with a template for how to value maximise it through built separation. Importantly for the story of superblocks however, in a post-colonial country in the midst of a turbulent democratic transition and economic recovery, Jakarta’s monuments and historic sites also provided a backdrop for developers to latch their own conceptions of a national imaginary onto.

In telling displays of this, early superblocks were placed in the symbolic center of Indonesia’s history of decolonisation. Senayan City, the first large-scale superblock development, was built on public green space that had been previously set aside by Indonesia’s first president, Sukarno, for the 1962 Asian Games. This hugely symbolic public space was intended as a physical consolidation of collective anti-imperialism and as an emblem of Indonesia’s postcolonial national identity. For a property developer almost 45 years later, its privatisation represented a revival of that same sentiment through the conspicuous and performative consumption of luxury. 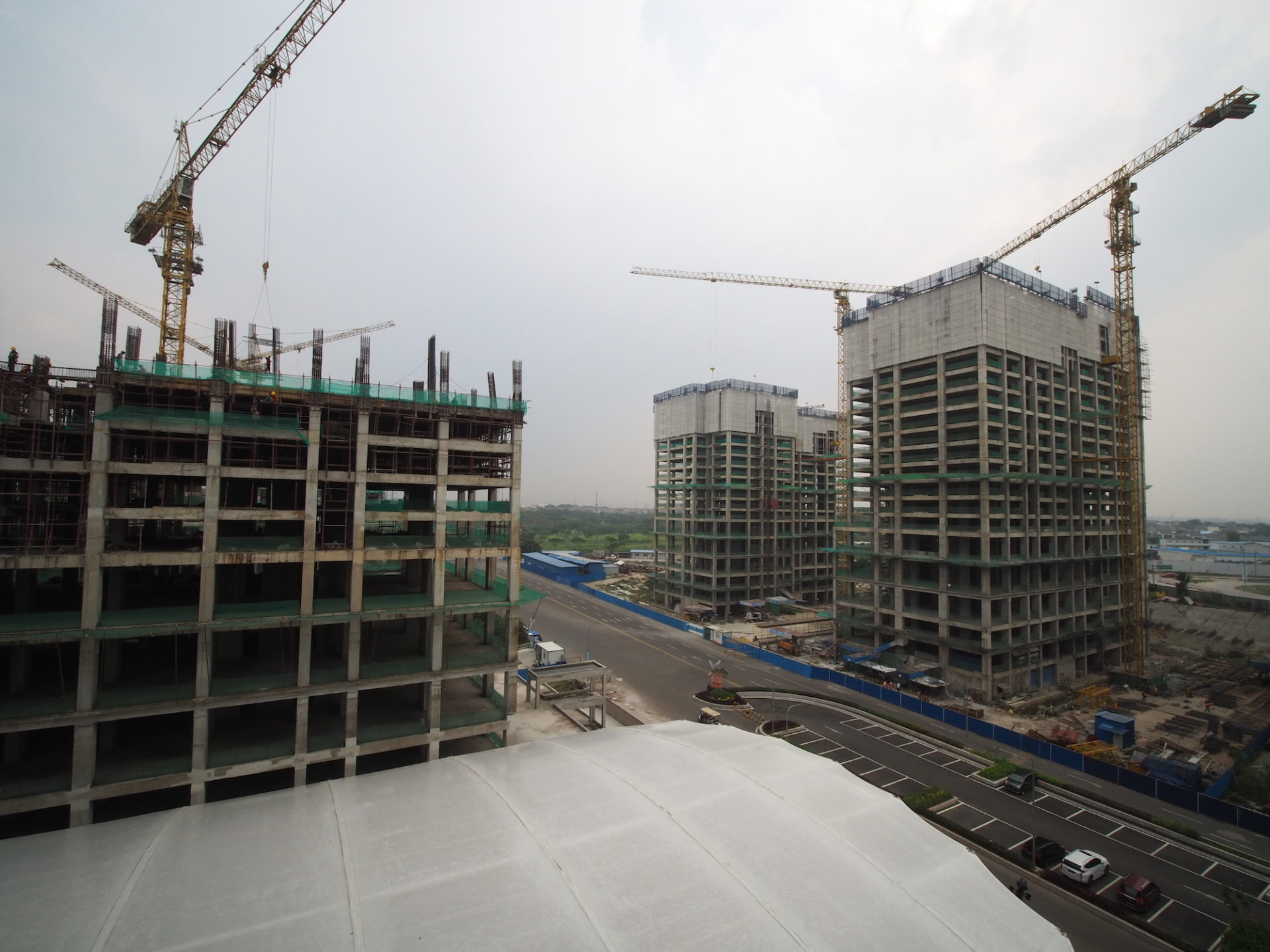 The business logic for constructing superblocks in contemporary Jakarta is clear. Through their experience with the new towns, property developers understand the value of marketing developments as both physically and cognitively removed from the city. Importantly, the perceived prestige of the new town developments has also set a precedent for how moneyed residents position themselves within the everyday processes of urban life. Isolation from the workings of the city around them has incubated new understandings of the relationship between access to wealth and being ‘a part’ of Jakarta.

However, what makes the superblock distinct from previous forms of enclosure is the relationship between geography and ideas of the nation. Marketed as a way to be part of the city but recessed from it, the superblock affords the opportunity to enter a broader global urban imaginary. In repeatedly blunt demonstrations of this, the marketing materials for inner-city superblock developments almost always place the developments as physical containers for not-of-Jakarta spaces. A superblock can be in a city and free of it simultaneously.

Not everyone views superblocks as purely exclusionary. Erik Harmes argues that much more than a barricaded theme park for the rich, superblocks and other similar developments across Southeast Asia are porous enclaves that facilitate complex social arrangements. A range of people enter and exit these compounds everyday. Cleaners, residents, reception staff, security guards, drivers, potential buyers and garbage disposal workers all have frictionless access to these spaces – so long as everybody performs the task of keeping the workings of the building hidden, quiet and calm. However, while social interaction between residents and service workers undoubtedly occurs, the superblock is less a porous enclave than one able to allow and disallow access based on an already decided upon rule set. 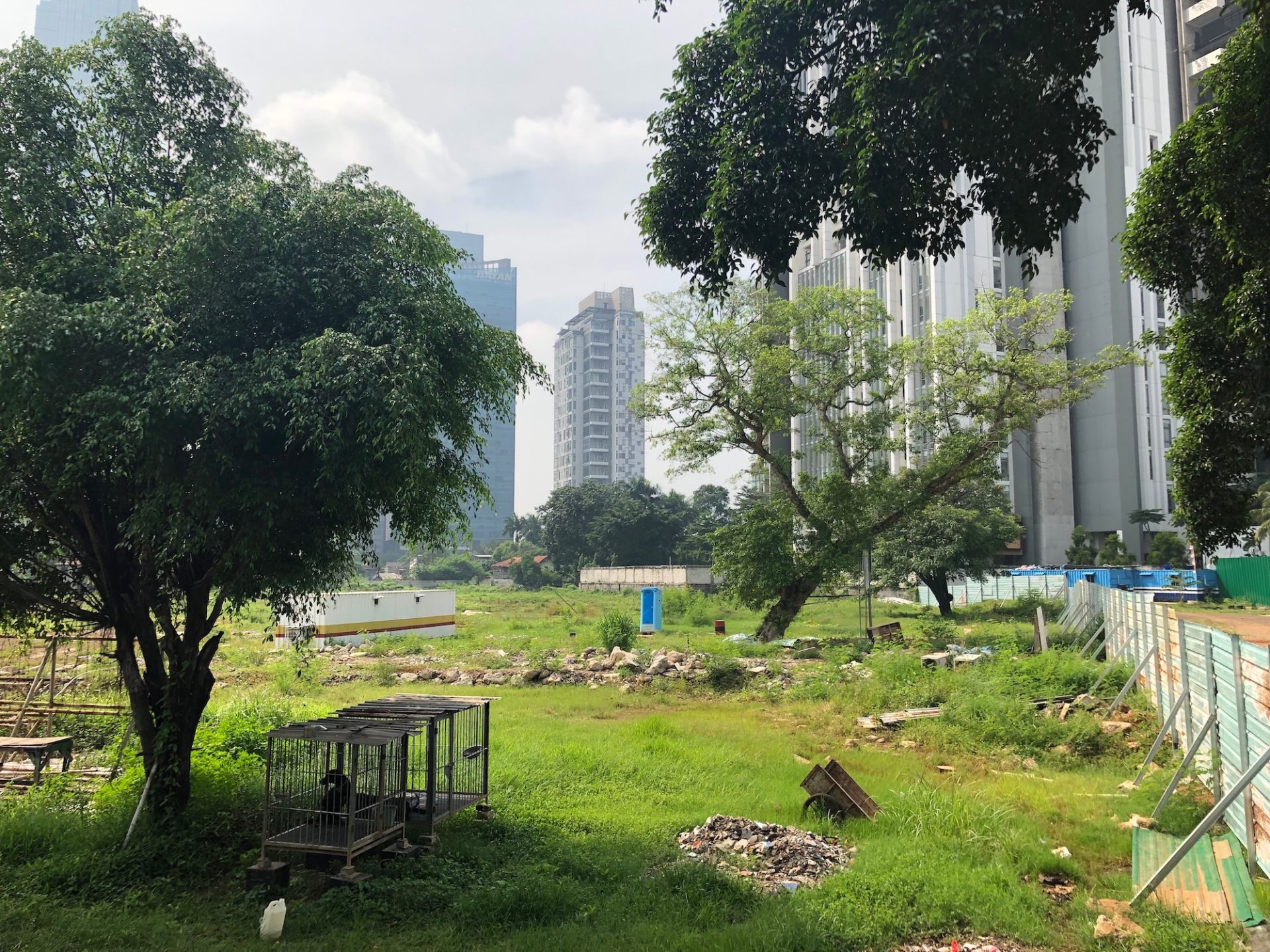 Caged guard dogs at one of the few undeveloped (but still heavily fortified and guarded) blocks of land on the edge of Senayan Central Business District, South Jakarta.

The developer led social dynamics these spaces facilitate are reflective of Jakarta’s broader political economic climate. Individuals who profited from the tumult of the country’s democratic transition have found themselves in a position to transform how the city functions. Urban theorist Suryono Herlambang has termed this process the ‘rescaling’ of capital in Jakarta, where a ‘devolution of political authority over spatial planning to regencies and municipalities’ (given Indonesia’s political environment, read: developers) has occurred.

But what is being rescaled here? The business logic of the post-2007 superblock largely mirrors that of the new towns of the 1980s and 1990s, with an enclosed imagining of an ex-metropolitan utopia the central selling point. The relationship between the state and developers is also almost identical, with rent seeking and bribery lubricating the construction process. What has been rescaled is how utopian visions are positioned geographically. Prestige is now found from being physically within the city but conceptually removed from it – not two hours’ drive from its center.

Consider superblock Kota Kasablanka in South Jakarta. The developer, PT. Pakuwon Jati, locates the building simultaneously as a parallel space to Orchard Road in Singapore and the entire city of Montreal in Canada, all while repeatedly reminding the potential purchaser of its physical placement in the ‘luxury’ of South Jakarta. This is a common theme in superblock marketing. Urban theorist Ananya Roy describes the construction of similar developments in Delhi as the ‘worlding’ of the mega-city ‘in the image of global urbanism’. But, again, is this worlding or more simply a case of a moneyed group dislocating themselves from the nuisances of living in a big city? Superblocks make and remake slippery definitions of real and imagined space. Anthropologist AbdouMaliq Simone recounts a similar sentiment by a resident in superblock Podomoro City who, when asked a question about what it was like living in contemporary Jakarta, answers: ‘on the thirty-ninth floor [of a walled development], where are we really anyway?’ 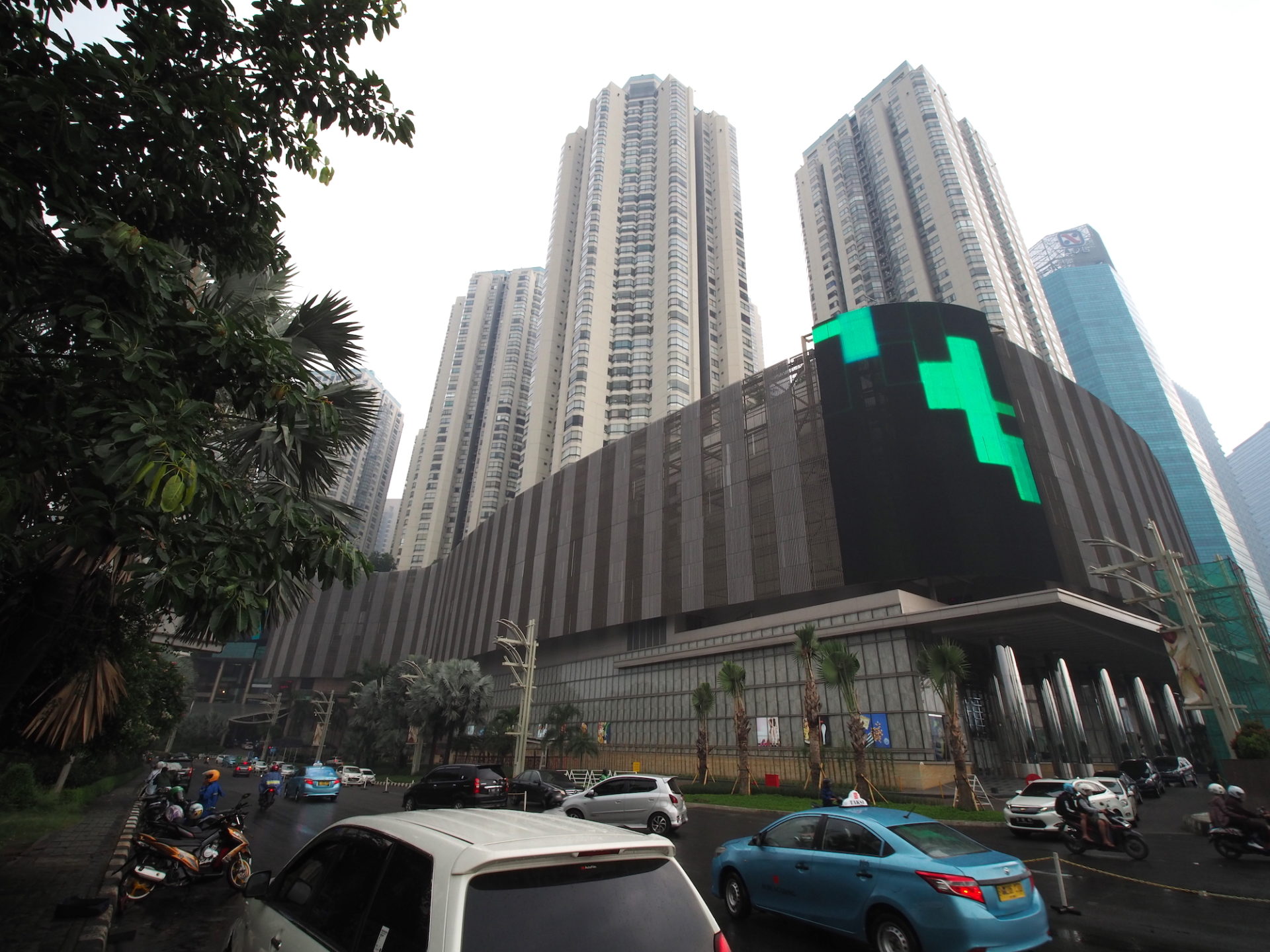 While similar developments have been built or are under construction in cities around the world, the rate of superblock development in Jakarta is staggering. Since 2007, over 10,000,000m2 of floor space has been added to the central city with average single floor areas ranging between 250,000 and 1,000,000m2. This enormous investment by property developers searching for prime-land grabs, coupled with Indonesia’s low interest rates for property investment, has superheated the city’s property market. In 2013, Jakarta was the most lucrative property market in the world, with investment in luxury residences averaging return rates just above 37%. The sheer pace of construction has driven less wealthy residents out of the city and, unsurprisingly, Jakarta as a broader urban agglomeration now stretches across a significant chunk of Northeast Java.

The logic of the superblock recalls both the old form of enclosing social relations found in the moneyed separations of the new towns of the 1980s, but it is also the construction of something entirely new. The nation, for those that can afford it, is increasingly entangled with the recessed conditions of the gated-estate gone global – privatised and keenly aware of its surroundings, but dislodged from the specifics of its geography and blurred into a worldwide network of prestige, inter-reference and money.

Darcy Gunning
Darcy is a PhD student at the University of Melbourne and a Doctoral Researcher at the Connected Cities Lab. His research focuses on labour rights, new cities and special economic zones.

Lahan Becek: Beyond Terraformation, Towards Wet Lands of Opportunity