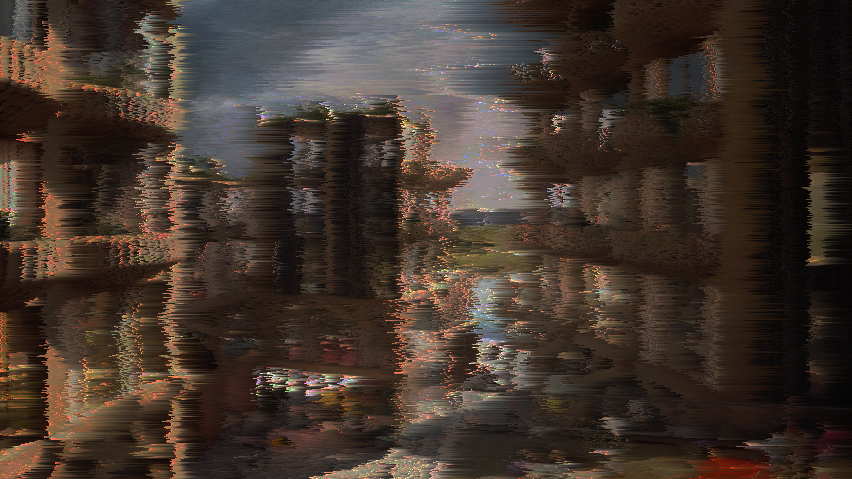 For the last two years, Sidewalk Labs, a subsidiary brand of Alphabet (Google’s parent company), has been in the process of planning one of North America’s largest areas of untapped urban land: the former docklands in Toronto. Headed by Daniel Doctoroff – Bloomberg acolyte and part dreamweaver of New York’s Hudson Yards fiasco – Sidewalk Labs wants to use digital tools to build smart cities for “urban innovation,” aiming to solve urban issues such as “longer commutes,” “higher rents” and “fewer opportunities” through technology.

Their Quayside proposal alone includes ideas for a Google HQ, schools, various forms of housing, plazas, offices and retail facilities. But while the scheme encompasses but a segment of the docklands, Quayside is meant to serve as a framework and test-bed for a wider proposal to be rolled out across the whole eastern waterfront area, dubbed the “IDEA District.” It goes without saying that these plans have proved particularly contentious. Criticism in the local and national Canadian press has highlighted its lack of affordable housing, data collection issues, corporate tax deductions and the undemocratic nature of the planning process, while activists such as the #BlockSidewalk campaign are organising to challenge the development.

Sidewalk’s plans for Toronto are emblematic of the ways Big Tech companies are taking over responsibilities traditionally provided by governments, and further encroaching into physical urban space. This approach applies the logic of platform capitalism — a model wherein a handful of companies have consolidated economic power by owning and controlling the majority of digital infrastructures — to urban planning, reflected in both the design and funding of Sidewalk’s plans for the Toronto waterfront in general, and its “proving ground” of Quayside in particular. Indeed, Sidewalk Labs have continually stated that they look at urban landscapes as they would a consumer digital product such as a phone. Rit Aggarwala, Head of Urban Systems at Sidewalk has said if “you think of the city as a platform, and design in the ability for people to change it as quickly as you and I can customize our iPhones, you make it authentic because it doesn’t just reflect a central plan.” 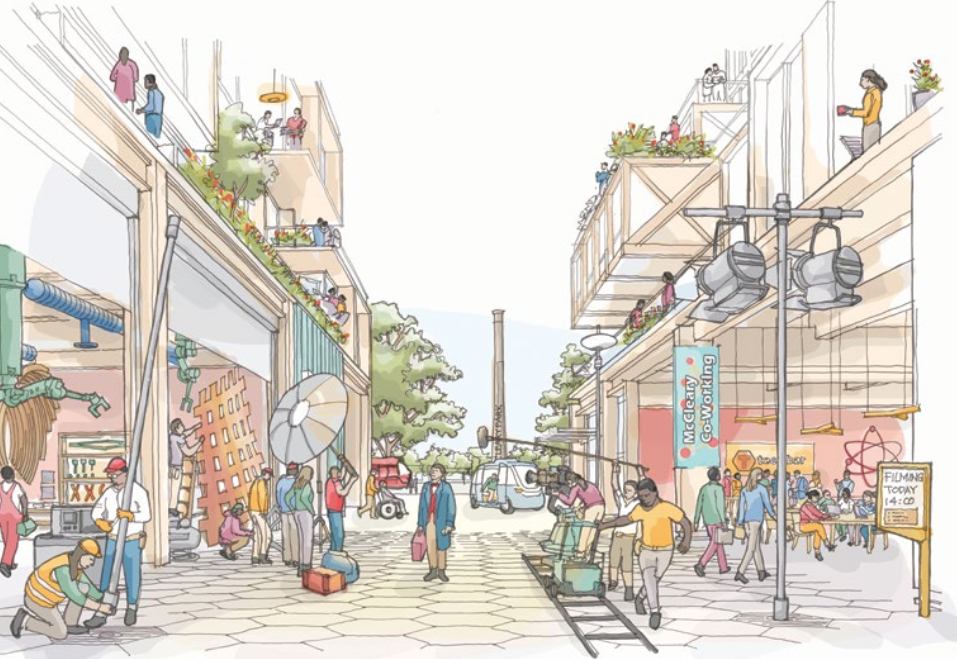 Rendering of McCleary, an area for future development in Toronto’s fictional “IDEA District.”

To achieve this architecturally, they claim to have designed a framework called “stoa” — a reference to the Greek typology — “highly flexible” structural grids of 12 x 12 metre columns infilled with prefabricated components that can be changed and modified over time (think movable walls and floors). The intent here is to create a structural framework that allows spatial plans to adapt quickly to new users and functions, using “flexible building designs” to “enable radical mixed-use, walkable neighbourhoods that reduce the cost of housing and retail space,” which in turn accommodate “growing companies and families”.

This approach to urban design is underpinned by digital and physical infrastructures which are, of course, proprietary to Sidewalk Labs. In their proposal, an entirely separate subterranean city is created where automated robots “transport mail and garbage via underground tunnels,” while surface-level infrastructure to support driverless cars is merged with embedded sensors to continually monitor not just transportation patterns, but public activity as well. Data collected through these processes is intended to be used in a digital replica of Quayside — a real time representation of the area used by planners to quickly simulate urban changes “without bothering residents.” Sidewalk’s digital infrastructure is further claimed to provide “ubiquitous connectivity for all,” encouraging “creation and collaboration” to vaguely “address local challenges.” To do this, Sidewalk’s data can be trawled by other companies to “make their own products and services for Quayside” including social and community amenities intending to “improve” city services. Through this API-like model, platform capitalism is further morphing into an increasingly spatial form, referencing the language of programming with mundane (and inaccurate) analogies of ‘software’ and ‘hardware’. The standardization of both the infrastructure and modular construction for Quayside is seen by Sidewalk Toronto as a process that, once built, can be scaled up and applied to cities across the globe — not unlike a universal operating system. 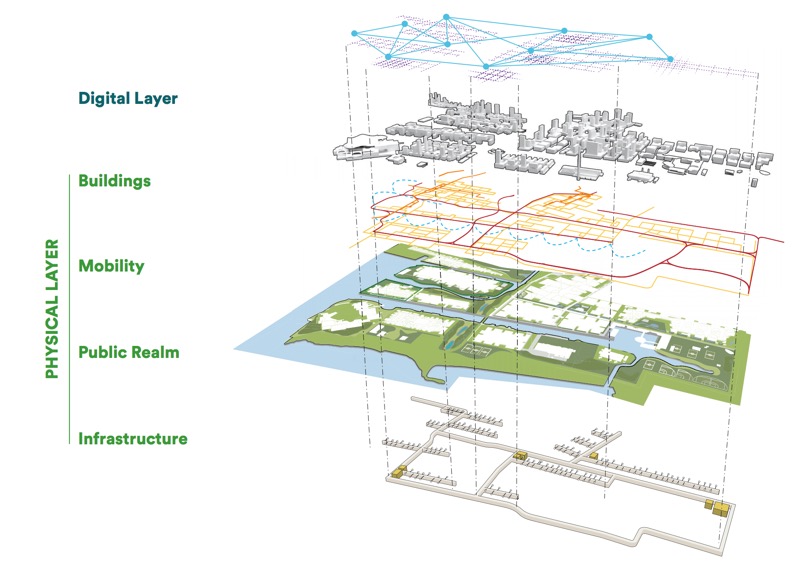 A schematic diagram of proposed digital and physical infrastructures for Toronto’s eastern waterfront.

The notion here of infrastructural provision as an adaptable framework, where design is a process rather than finite form, is not particularly new in architectural or urban history. One obvious touchstone is philosopher Henri Lefebvre, whose critique of post-war, functionalist urbanism in favor of an open approach to urban frameworks — allowing spontaneity, flexibility and immediacy — would become influential on the radical utopias of Constant Nieuwenhuys, Yona Friedman and the Spatial Urbanists. In particular, Yona Friedman’s critique of formal modernism by way of “flexible utopias” could be seen as a torch-bearer for the so-called “innovations” of Sidewalk Labs. Friedman spent his life designing a “paper architecture” of light megastructures that would provide a framework for inhabitants to live; one which is flexible, adaptable and able to change to a variety of conditions. In what could be a quote straight from Sidewalk Labs, Friedman described this as an architecture that “looks for techniques which don’t impose a preconceived plan . . . It is the user who makes the project with a potential ‘designer’s participation.”

And while community participation is now routinely used by developers at the start of projects to whitewash top-down urban development processes, through Sidewalk’s clever approach to public relations, capitalist urban development appears to explicitly absorb the spatial critique of itself, incorporating user-input, flexibility, temporality and participation. This becomes particularly clear in the development of ‘307’, Sidewalk Labs “experimental” space in Toronto which opens its doors to the public once a week so that they can “contribute to the co-creation of Sidewalk Toronto.” Here, a “Plan Your Neighborhood” prototype has been developed via generative design methods — simulation algorithms developed to quickly test design options based on a series of parameters — with which the public can make design choices and see how they perform. 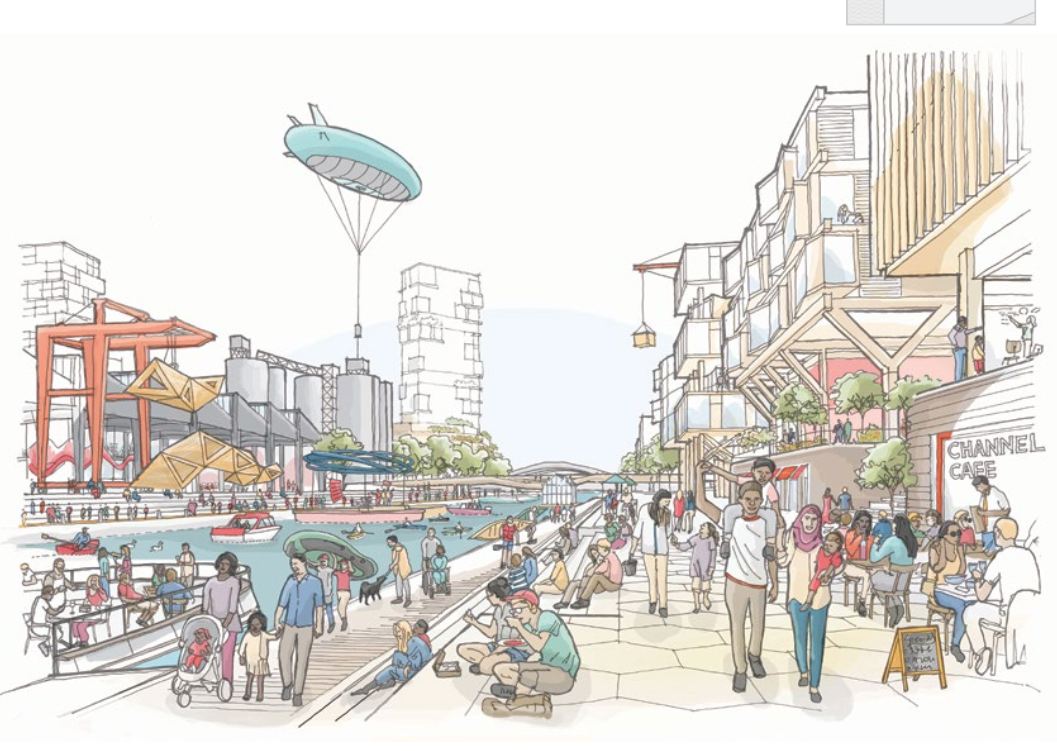 Rendering of Keating East, another area for future development within the “IDEA District,” from Sidewalk’s Master Innovation and Development Plan.

But in terms of funding the proposal, it becomes clear that Sidewalk’s version of platform capitalism follows a less transparent, and more consistent, neoliberal logic. In a business case document, Sidewalk describes how plans for an incremental tax to fund construction of it’s development would not be enough to realize the pace and scale required by the municipality. To remedy this, Sidewalk proposes two solutions for to make up the “critical financing gap.” The first is for Sidewalk Labs to provide financing of public funds in advance for the construction of infrastructure — in effect a loan to the city — while the second sees them directly funding “advanced infrastructure systems,” effectively working as a tech incubator to finance third parties who need innovative “operational models” to run.

Legal scholar Frank Pasquale has described such a process as “functional sovereignty.” Pasquale claims that digital political economy can help us understand how platforms accumulate and exert power, and he believes platform companies can no longer be read as “market participants” but rather “market makers.” Through this process of market making, Pasquale explains that platforms aim to take over more governmental responsibilities over time, moving from territorial to functional sovereignty, where urban citizens will be increasingly “subject to corporate rather than democratic, control,” affecting the means of social reproduction, from renting apartments to transport.

"Quayside becomes a microcosm of a state in itself, a libertarian citadel run by Sidewalk, who rent out an infrastructure for companies to use under the pretext of solving real-world problems. "

Relating this to the city, Pasquale asks “who needs city housing regulators when AirBnB can use data-driven methods to effectively regulate room-letting, then house-letting, and eventually urban planning generally?” The advantage that platform companies now have in terms of data collection, analysis and implementation, in the form of machine learning, gives them a unique advantage and appeal to city officials, as the state continues to withdraw from certain aspects of public life.

Yet as AirBnB are busy making prefab housing, it would seem Sidewalk addresses Pasquale’s question more bluntly. While the funding of Quayside adopts a now ubiquitous form of public-private partnership development, the wider implication is a company taking over municipal provision, in effect allowing it to operate as its own planning department. Quayside becomes a microcosm of a state in itself, a libertarian citadel run by Sidewalk, who rent out an infrastructure for companies to use under the pretext of solving real-world problems.

A rendering of a proposed Google HQ in the Villiers West section of the “IDEAS District.”

Sidewalk Toronto have thus been on a quest to drum up public and governmental support for their proposal before it goes through planning. Part of this drive has included getting Snøhetta and Heatherwick on board to develop the architectural components of the proposal. This collaboration makes sense given that both firms follow a similar solutionist approach to the tech giant: the simplistic idea that design can solve our environmental (Snøhetta) or social concerns (Heatherwick). Merging these ideas, a series of renders were released to the media at the end of February visualizing a “mass timber-city” proposal for Quayside. These images also formed a key part of the visuals in Sidewalk Labs’ Master Innovation and Development plan published in June. 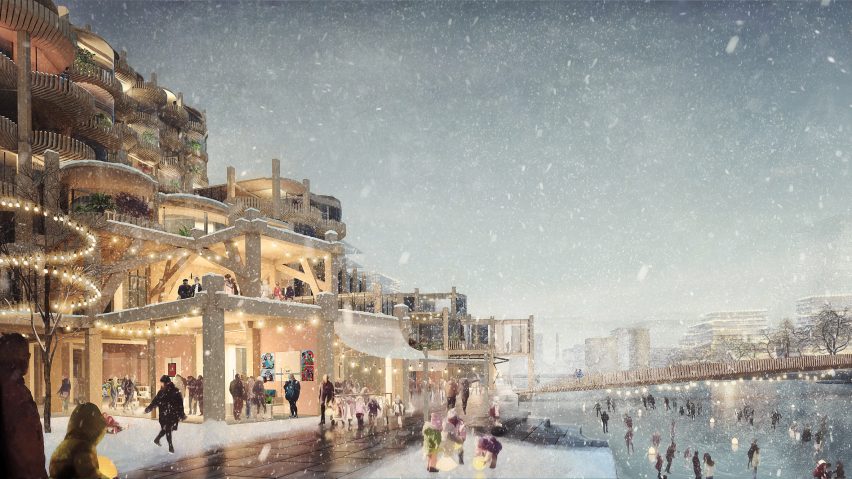 What we see is a representation of space which has been loaded with metaphysical subtleties. We encounter a landscape that appears untrained by technology: a pastoral fiction that speaks more to a mutated village life than what is arguably the height of techno-capitalism today — functional sovereignty, the data economy and its corresponding context of algorithmic governance.  These renders and quaint sketches show a continual festival at Quayside, like a sanitized scene from a Bruegel landscape. To mystify their proposal, Sidewalk have turned to utilitarianism’s old enemy romanticism. Images of ambiguous environmentalism, nature, organic community and localism haunt Quayside. These images, along with Sidewalk’s promises of faux-democractic participation, play with our anxieties about climate change and desire for a utopian future.

But any real, democratic utopian impulse is ultimately suppressed, becoming a paradoxical mediation of the very rationalising tendencies in which Google is deeply embedded — a technocratic logic and framework with planetary scale ambitions. We should thus keep our eyes keenly on the developments currently playing out in Toronto. If a precedent is set, the urban platform infrastructure being developed by Sidewalk Labs may well be coming to a town near you.

add comment
Armando Páez
"These images, along with Sidewalk’s promises of faux-democractic participation, play with our anxieties about climate change and desire for a utopian future." That is 'climate change': some are playing with anxieties, fears, (eco)blames... You get what you deserve.
Related