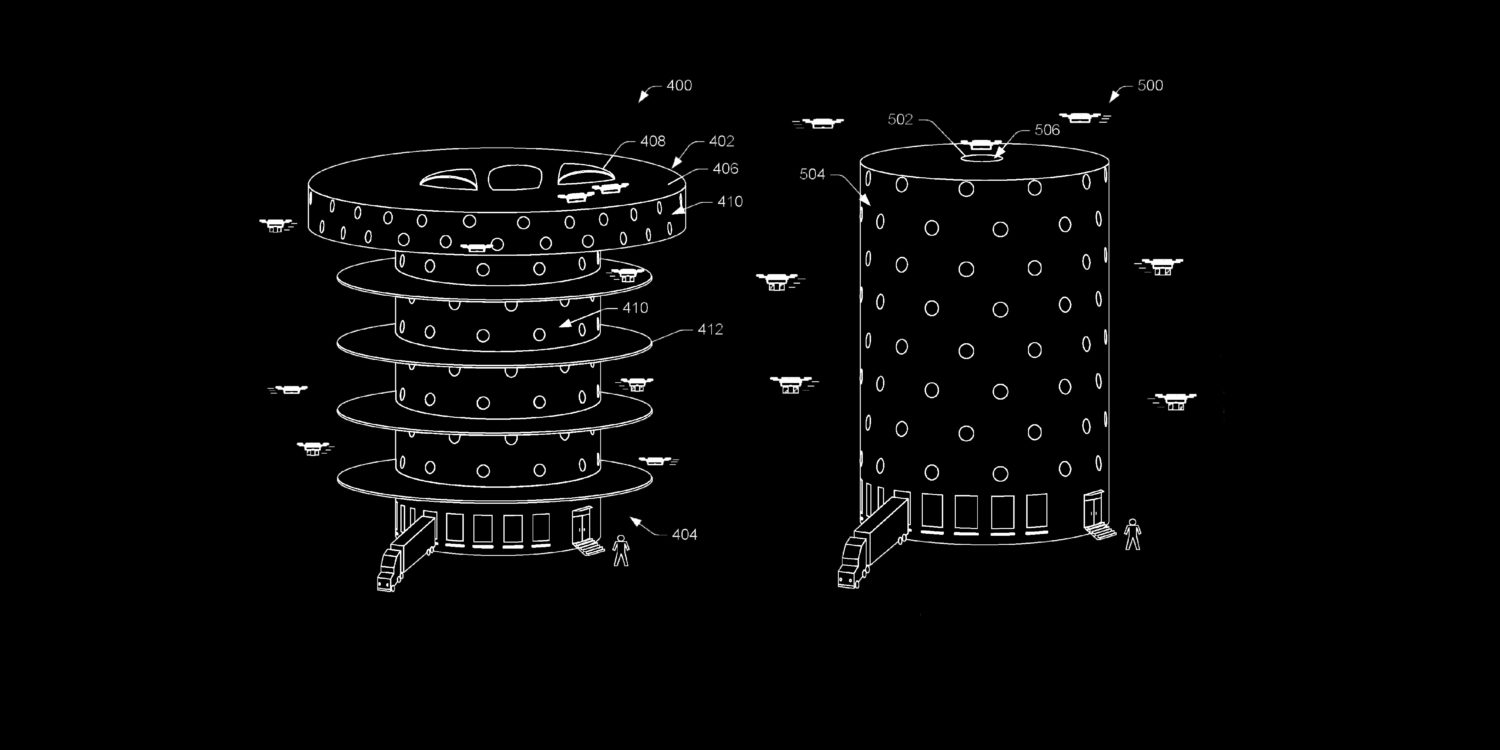 An architectural soothsayer predicting the future today could find worse places to start than sifting through patents filed by the ‘Big Five’ tech companies at the European Patent Office. An essential part of their growth strategies, the aggressive protection of intellectual property through international law has proven key to Big Tech’s oligopoly over the past twenty years.

Increasingly, this intellectual property consists of research and development into artificial intelligence, producing a gold rush of patent applications in this field. Yet, while companies like Apple or Microsoft tinker with variations on consumer goods, it is Amazon, with their own brand of automated futurism, which seems the most intent on merging processes of machine learning with principles of everyday spatial organization.

Since 2010, Amazon Technologies Inc. has filed 5,860 patents, ranging from the seemingly banal to the serially bombastic. Over the last two years, the public release of these patents has become something of a ritualistic pantomime – one routinely covered in the design press. We’ve been treated to an Archigram-esque world of walking cities, inflatable mega-structures and roaming blimps. This world has included proposals for multi-level drone fulfillment centers; mobile robotic warehouses; augmented reality furniture; inflatable data centers; underwater and flying warehouse facilities; infinitely expandable data centers; on-demand clothing manufacturing, automated shopping with image recognition systems and the ever-present spectre of drone delivery.

To look at these patents is to glimpse the automated future Amazon aims to create. Despite strict rules on patent illustration, they allow an appreciation of Amazon’s restless patent filings as a body of work; a world in itself, a totality. And this world is moving from the invisible peripheries of our cities – the abstract spaces of logistics and anonymous warehouses – into proposals that reach the center of everyday urban space. If we are to read a city as something mediated through a series of scalar jumps, incorporating both the human body and, these days, global connections, Amazon’s urban ambitions can be read in a similar light. 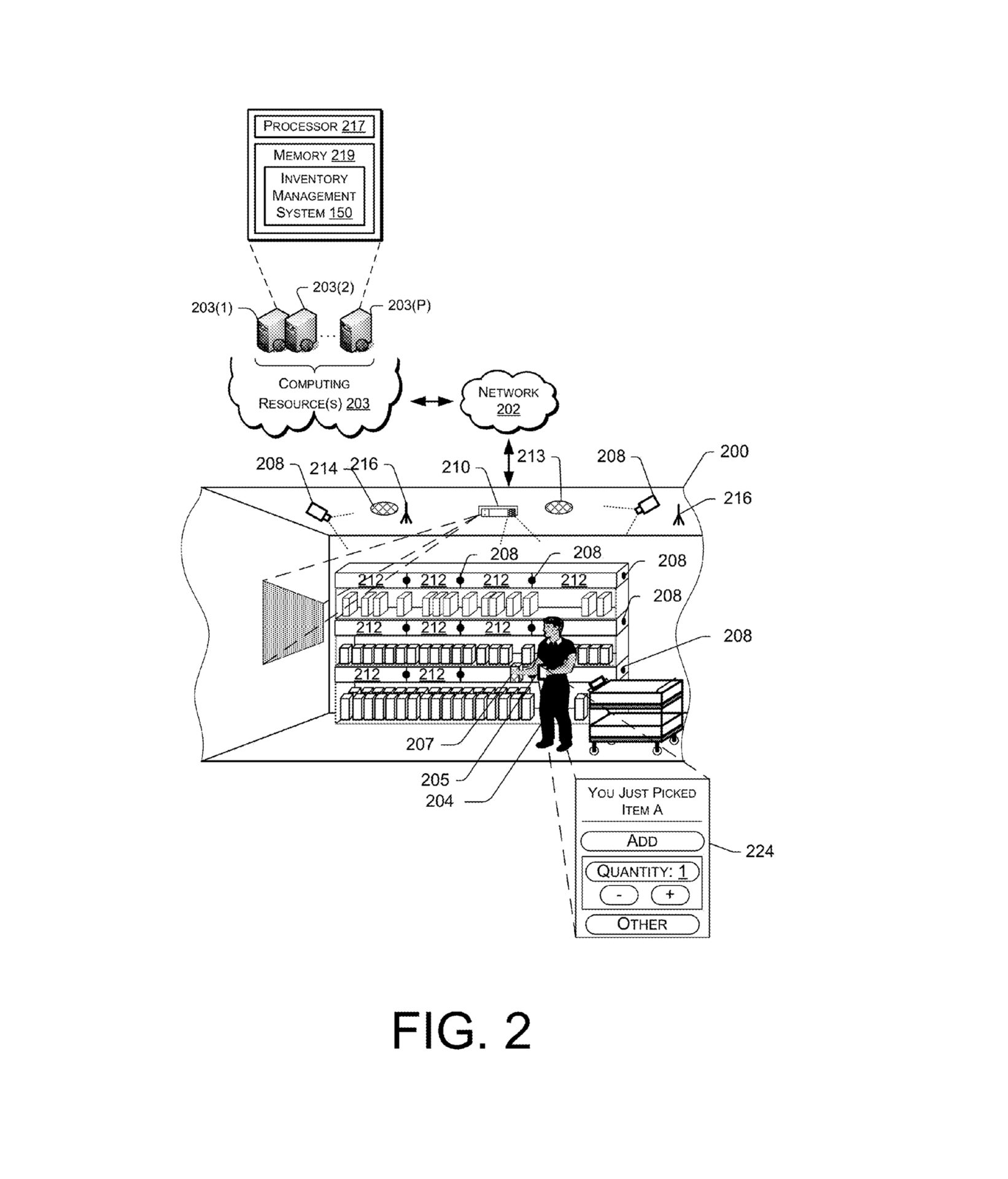 Patent drawing for ‘Transitioning Items from a Materials Handling Facility – Pay by Selfie.’

"Amazon makes little distinction between a customer in a shop or picking agent working at their fulfillment centers."
Matthew Stewart

Take, for example, the technology behind image recognition systems for shops – or, as it was reported, ‘pay-by-selfie. Through machine learning, the patent details a method of detecting ‘users’ through image analysis. It explains an automatic method for tracking and identifying items gathered by these users in a given commercial space. When the user exits the space, they are automatically charged for the items, the result being an elimination of cashiers and checkouts.

The use of the term ‘user’ here is illuminating. Amazon makes little distinction between a customer in a shop or picking agent working at their fulfillment centers. In fact, it stresses the similarities between the two: both locate items from an inventory. In addition to shops and fulfillment centers, Amazon believes that image recognition technology could be further applied to libraries and museums – all ‘inventory’ becoming flattened and subject to the algorithmic gaze. 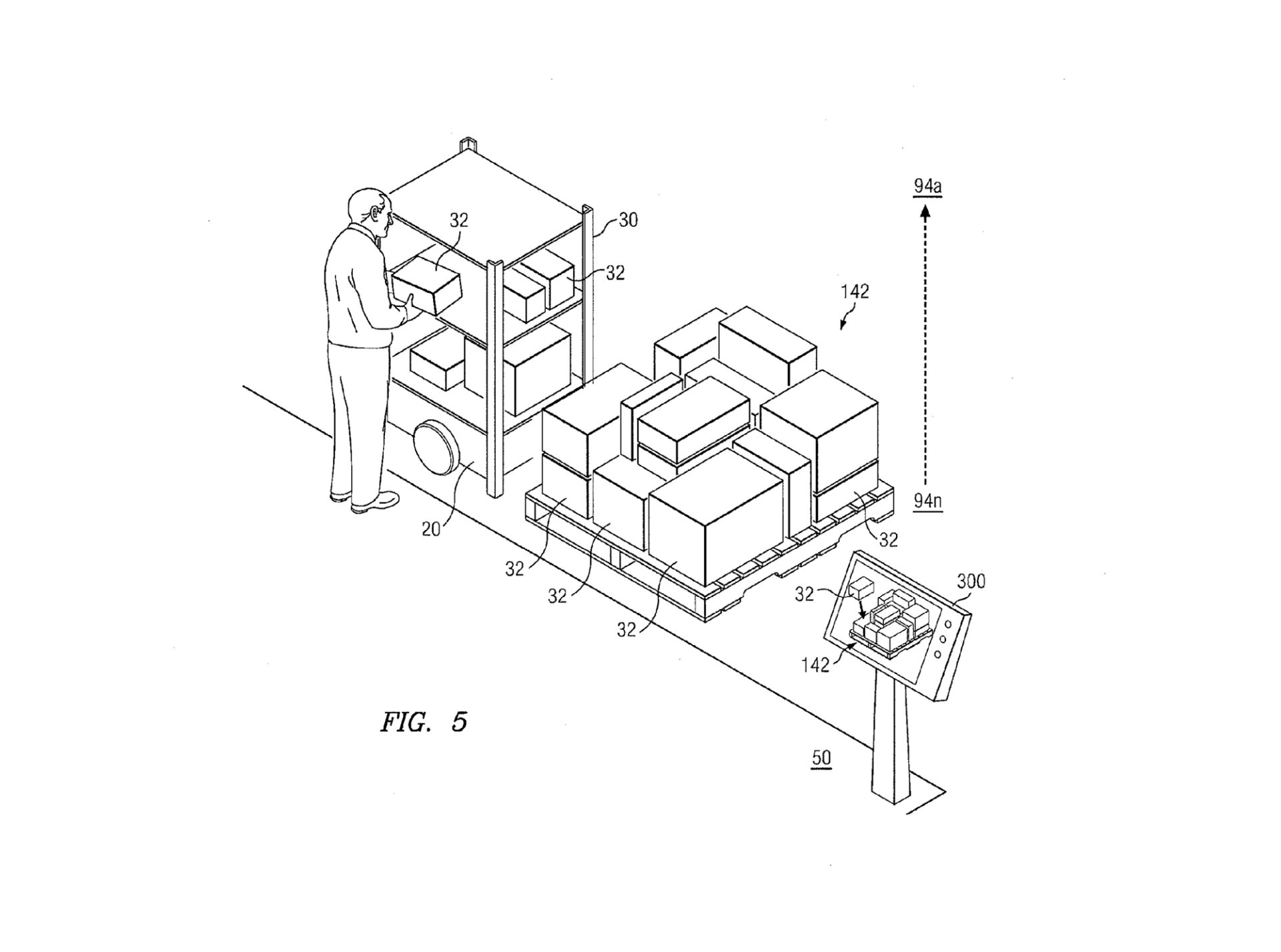 Patent drawing for ‘Automated Replenishment of a Retail Facility.’

Having eliminated cashiers, Amazon then turns its attention to shelf stackers and store managers. A patent for ‘replenishing a retail facility’ shows Amazon answering the age old problem of “restocking display shelves in a timely and efficient manner”. Amazon believes stocking shelves inside shops is impractical given the rise of 24-hour retail and an overall increase in inventory. Human input, they claim, takes too much time and interrupts customers while shopping. To minimize this impact “on the consumer shopping experience”, Amazon’s answer is the semi-automated restocking of shelves using mobile drive units.

Display shelves are now brought to workers, who are relegated to ‘restocking stations’ while robots are configured to freely roam around a given workspace. They scan shelves looking for depleted inventory, place orders and unload deliveries – all to an ‘optimal schedule’. But the real omnipresent agent in Amazon’s patent is the ‘management module’. This module controls the entire automated process and can determine which shelves need stocking when inventory is low, track the location of replacement inventory, give instructions to mobile device units and determine an optimal unpacking sequence.

Their input doesn’t stop there. For existing spaces, CAD models of their layout can be uploaded to the management module to create a virtual inventory map, allowing the system to work in a range of environments and constraints. And it can be used further to plan an optimized layout before this process even begins, effectively bypassing the role of a commercial architect in favor of a process of algorithmic design. 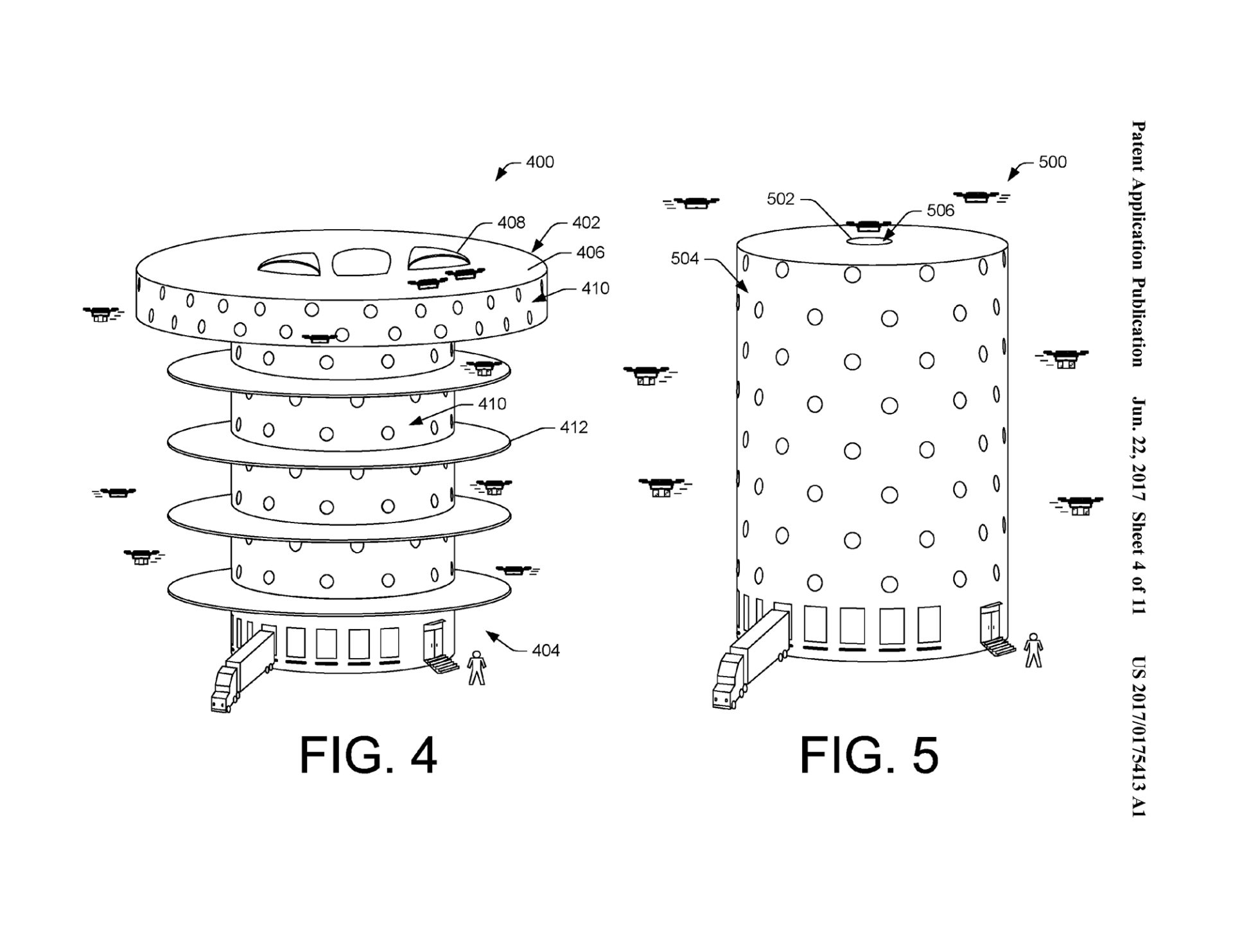 Incorporating the semi-automated management of retail facilities, Amazon subsequently turns to their warehouses. A patent recently filed for multi-level fulfillment centers identifies an issue with their current building typology, which typically consists of large single-story volumes located on the edge of cities. For Amazon, this is impractical. By locating fulfillment centers within central urban areas, inventory can be delivered more quickly or collected by customers. For this purpose, their patents have proposed various  uncanny, multi-story steel framed buildings used to process freight for delivery or collection.

The most publicized of these structures was widely nicknamed the  ‘drone beehive’, solving ‘delivery problems’ within cities to much fanfare. Scratching the surface of the Silicon Valley solutionism inherent in this patent, however, reveals another story. Critically, the patent details specify that, of the thousands of orders each day, drone delivery would only deliver a small proportion. The patent hints that a more practical delivery method would instead involve exploiting the gig economy. Perhaps unsurprisingly, a service known as ‘Amazon Flex’ already forms part of their logistics division, offering anyone with a license the chance to become an on-demand, ‘self-employed’ delivery driver. 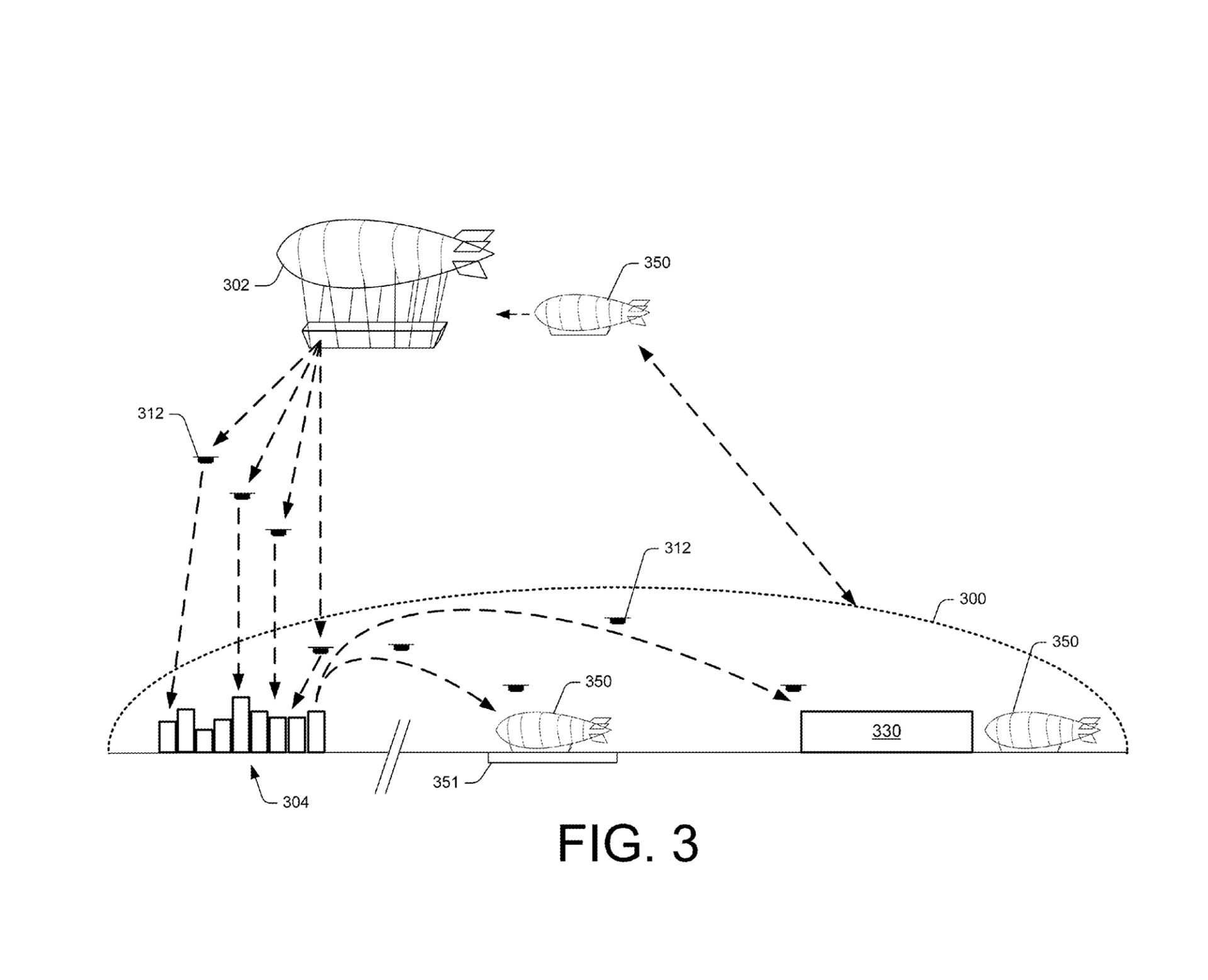 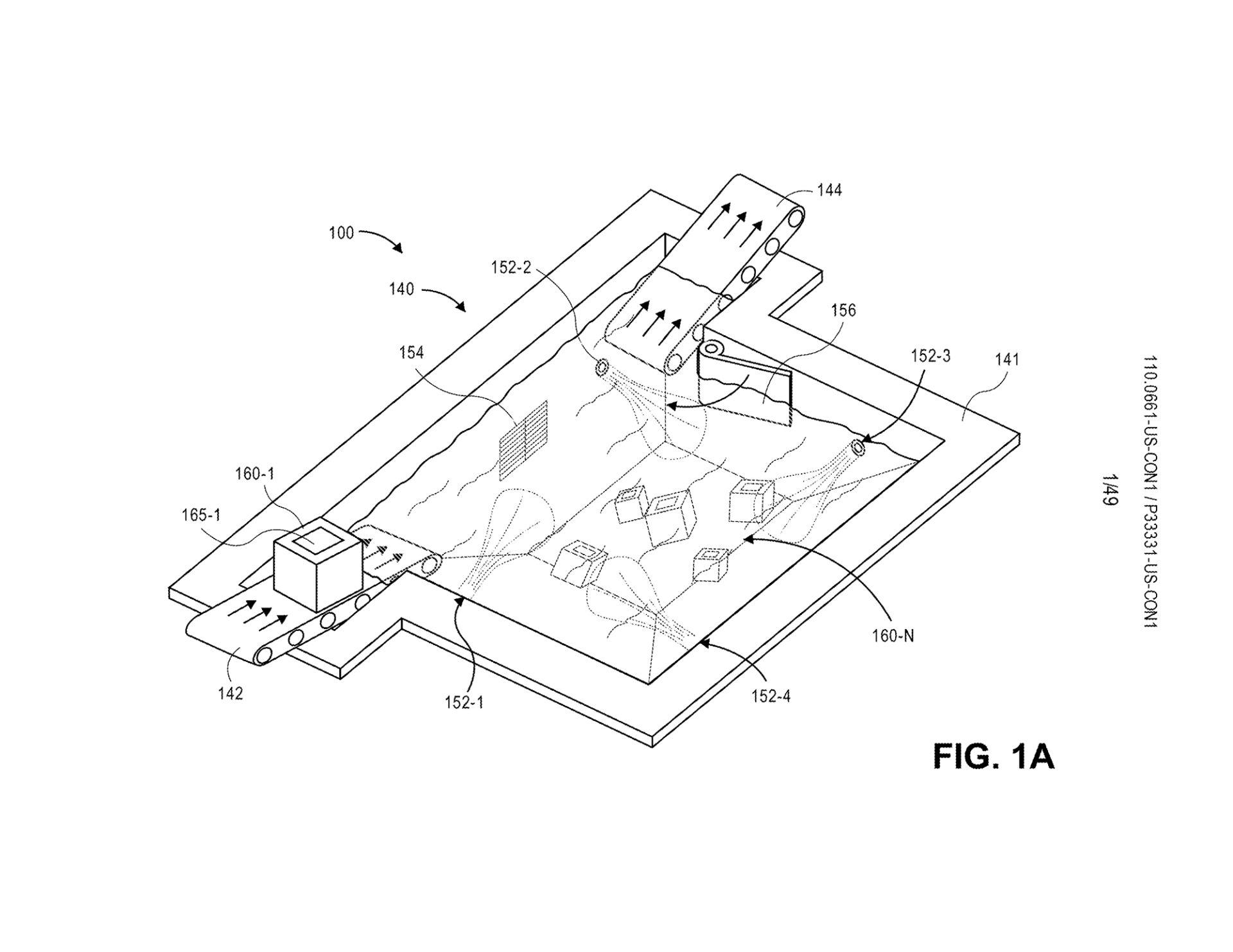 "While some of these patents could be marked as routine publicity stunts, lurking beneath Amazon’s bravado is an obsession with organisation and productivity: oriented towards abstract users, measured in data, and governed by algorithms."
Matthew Stewart

Similar to the ‘drone beehive’ in Amazon’s patents are their  ‘Airborne Fulfillment Centers’ — large warehouse blimps that hover over urban areas — as well as ancillary ‘Aquatic Storage Facilities’. Floating at an altitude of 45,000 feet, the Airborne Fulfillment Centers are conceived in the patent as giant, stratospheric mobile stores. Customers browse and order from a specifically stocked inventory before drones descend from these blimps with their products. To a more implausible degree, Aquatic Storage Facilities deploy a similar strategy: waterproof packages are stored in various bodies of water and tracked by a networked computer infrastructure, allowing them to float to the desired location when an order is placed. For decades, the edgelands of late-capitalist cities have been host to logistical space, serving as physical hubs in the distribution of goods produced across the globe. The basic principle of these patents is an uncanny challenge to the conventional urban planning wisdom that sees logistics as situated marginally between city and country.

While some of these patents could be marked as routine publicity stunts, lurking beneath Amazon’s bravado is an obsession with organization and productivity: oriented towards abstract users, measured in data, and governed by algorithms. The format of patent filings typically details a problem and solution. Each problem is an unceasing question of how to hasten processes of consumption in minutes, seconds and milliseconds. It can be understood as the logical conclusion of Taylorist principles of management, aided and abetted by algorithms. Amazon is interested in the fraught relationship between time and space. Time should be continually sped up and to encourage this, everything must be quantifiable. Mirroring this idea, spatial layouts should be highly efficient yet flexible. 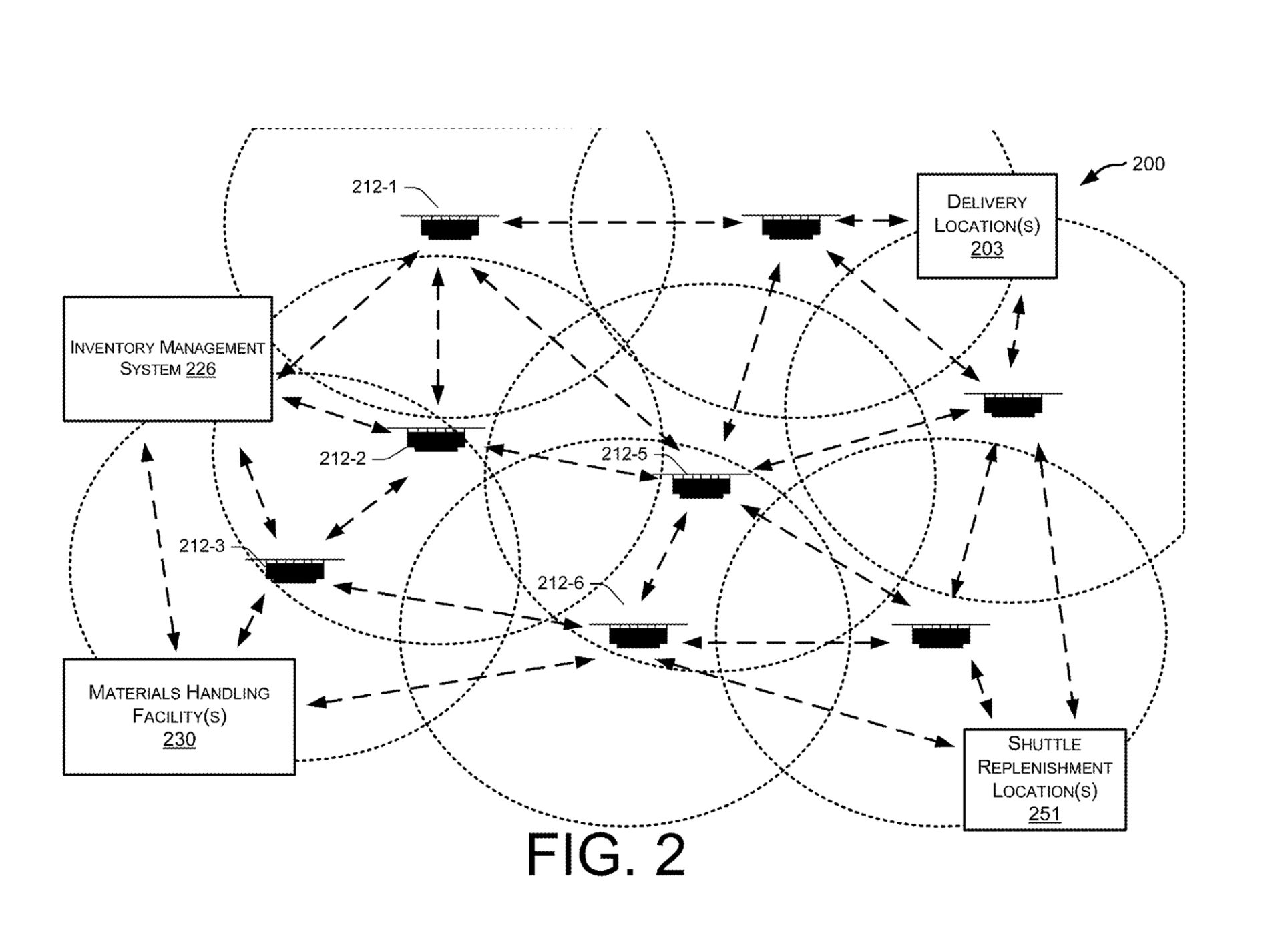 These details lead to wider questions surrounding what has been dubbed ‘platform capitalism’. Amazon’s business model is not so much e-commerce, but rather the provision of a vast privatized infrastructure, working in both the digital and physical realms. In his recent book on the topic, Nick Srnicek describes platforms as “digital infrastructures that enable two or more groups to interact,” acting as intermediaries that bring “together different users: customers, advertisers service providers, producers, suppliers, and even physical objects”. Srnicek continues to explain that platforms typically come with “a series of tools that enable their users to build their own products, services and marketplaces”. Amazon’s traditional platforms already play host to digital and physical platforms connecting independent sellers to customers and will, if predictions are to be believed, soon connect both extensive shipping and airfreight operations. Furthermore, Amazon Web Services serves as a network of global data centers powering much of the internet by providing cloud computing, website hosting, data storage and, now, machine learning for companies as diverse as Airbnb, Autodesk and Netflix. This infrastructure also serves as the underlying driving force behind ‘Alexa’, the popular ‘smart home’ device working as a platform for companies involved in both home and office automation (including co-working and -living crusaders, WeWork).

"The future isn’t exactly the slick looking high-tech tabula rasa as indicated in Amazon’s patents, but perhaps a retrofitted version of the present."
Matthew Stewart 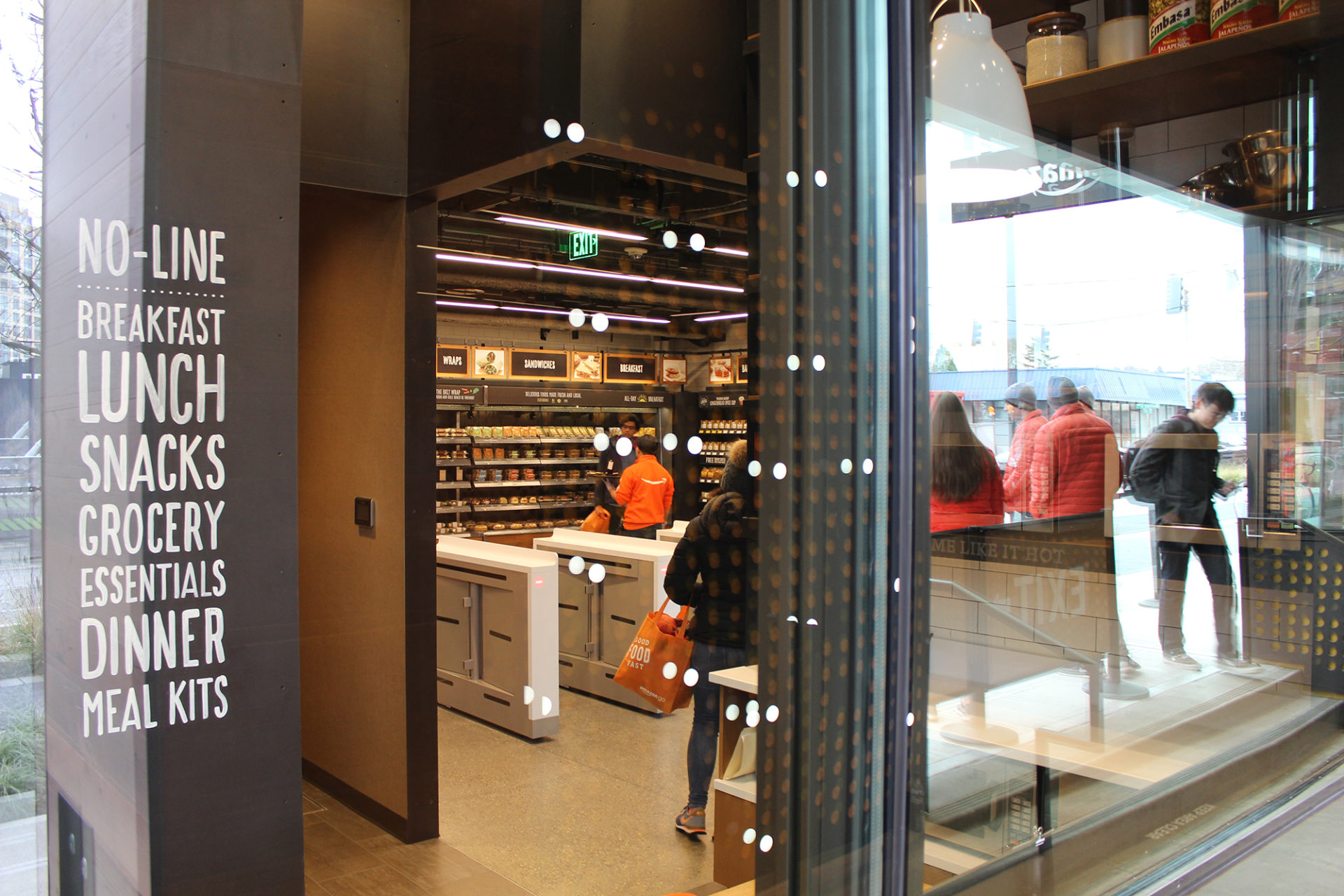 The entrance to an Amazon Go grocery store.

‘Platform capitalism’ might stand as the wider context for Amazon’s patent filings, but what does Amazon urbanism look like when made an everyday reality? Last year, two semi-automated shops were opened in Amazon’s home city of Seattle. These ‘beta’ tests, dubbed in appropriate tech jargon, consisted of the glitchy ‘Amazon Go’ store and ‘Amazon Fresh Pickup,’ the former opening to the public in January. For systems relying on  the latest cutting edge technological advances – an amalgamation of image recognition, big data, machine learning and cloud computing – their physical designs were confidently bland and uncontentious. Generic display units, wood veneer, fake hand drawn typography, greengrocer’s aprons, and a local baker: it’s the unmemorable quality of the aesthetic that is most disturbing. The future isn’t exactly the slick looking high-tech tabula rasa as indicated in Amazon’s patents, but perhaps a retrofitted version of the present. These banal, real-world architectures leave one unable to grasp the scale and ambition of what feels like a distinct and data-devouring form of Amazon urbanism. Amazon’s patent filings, then, are not so much whimsical follies but a colonization of everyday experience; a concerted effort to control an all encompassing infrastructure of home, office and retail automation, one in which the city becomes a giant fulfillment center, and humans mere inventory pickers.