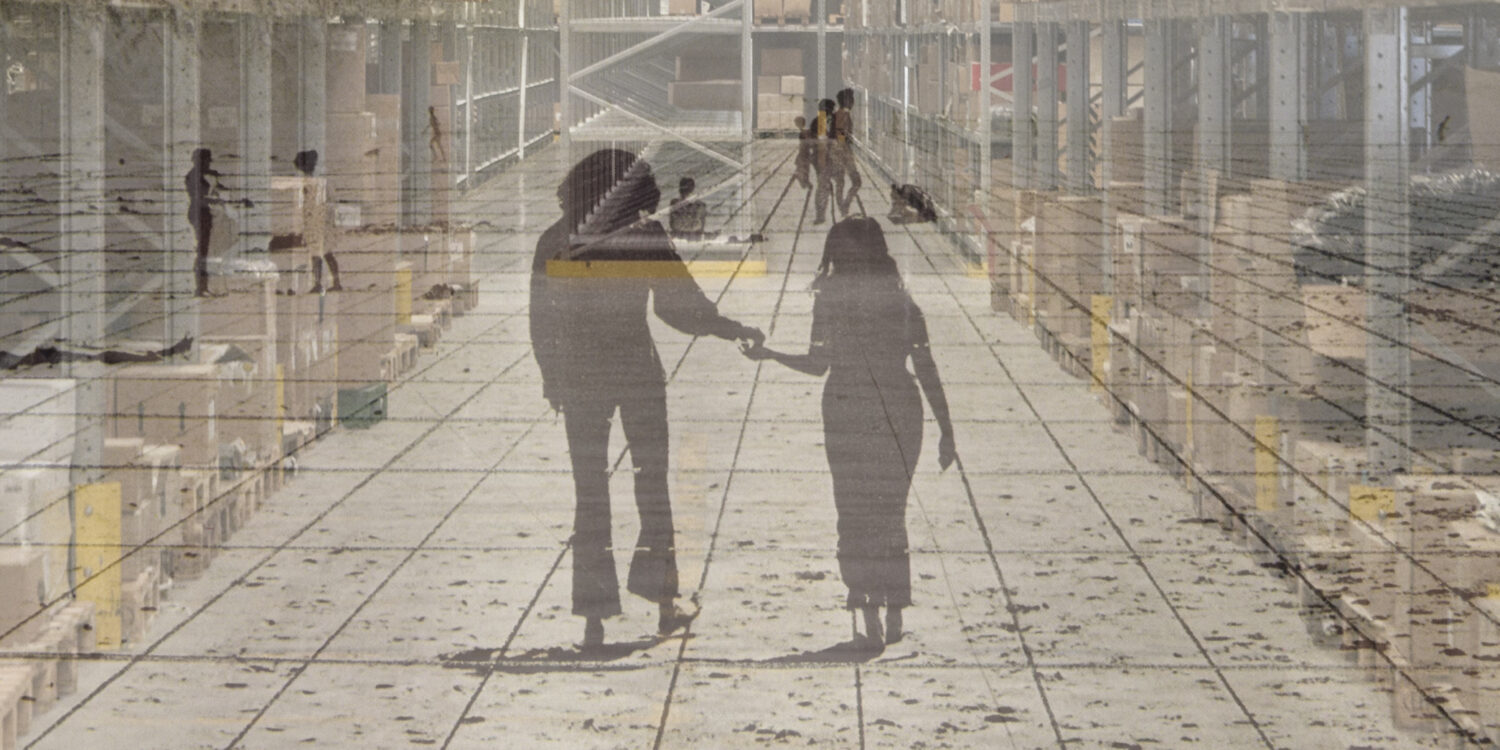 Half a century after Superstudio launched a radical critique of modern urbanism, uncanny echoes of their elaborate architectural futures can be found in the 21st century’s vast infrastructures of on-demand consumerism.

Every citizen in the 2.000-Ton City lives alone in a five-square-metre apartment: a cell made of screens, sensors and all the technical systems needed to support human life — sparing occupants the burden of ever having to leave. Thousands of these cubic capsules, stacked vertically, form an uninterrupted megastructure, stretching evenly across all sorts of landscapes. Seen from afar, this “city” is a series of linear buildings intersecting orthogonally in a continuous grid, symmetrical and immovable, with a constant height of 1,333 metres. The small interior of the cells is designed to be, itself, a spatial interface used by the inhabitant to express their physical and psychological desires. Their thoughts can be detected automatically by a brain-impulse receiver installed in the ceiling, and transmitted through an intricate network of supply chains, hidden in the perimeter walls, which will immediately deliver whatever the citizen needs.

2.000-Ton City is just one of a dozen imaginary cities created by the Italian architecture collective Superstudio (and conceived primarily by member Gian Piero Frassinelli) for Twelve Cautionary Tales for Christmas. First published in Architectural Design in 1971, Twelve Cautionary Tales sketches out futuristic scenarios that take basic concepts of modern urbanism to their logical extreme in order to reveal their intrinsic absurdity. Looking back at the entire oeuvre of Superstudio, it is impossible to compartmentalise different works: one can see traces of The Continuous Monument (1969) or Istogrammi di Architettura (1969) in the Twelve Cautionary Tales for Christmas, and each project can be read as radical, ironic reactions to the huge social and political changes that the West, and specifically Italian society, was facing at the end of the 1960s.

Like many other countries, Italy experienced huge economic growth starting in the 1950s and continuing into the following decades, corroborated by an expansionist vision of the market and embrace of consumerism. As the filmmaker Pier Paolo Pasolini lucidly reported in many articles during those years, such rapid development spurred an illusion of social progress and economic wealth that irreversibly altered, corrupted, and subjugated the Italian working class. 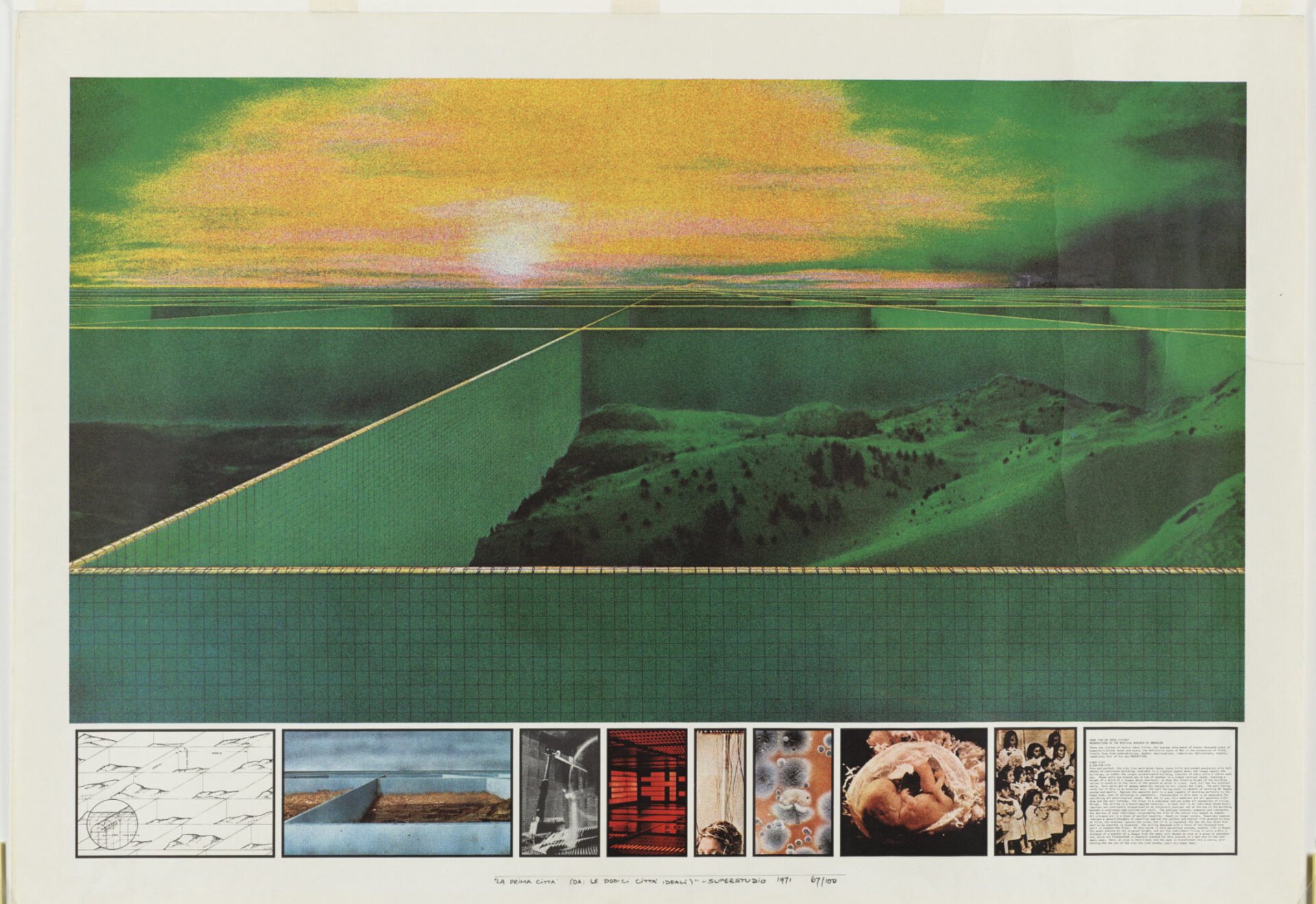 An aerial perspective view of the 2,000-Ton City

All of Superstudio’s radical projects posited an acceleration of both the causes and the effects of these changes. Through unexpected designs that stretch the boundaries of architecture itself, they depict a new human condition, exclusively tied to market forces. The concept of a “superarchitecture” — taken from the name of a 1966 exhibition curated by Superstudio and Archizoom in Florence — similarly described a new, future environment of “super-production, supermarket, super-induction to super-consumption.” But if Twelve Cautionary Tales carried a pessimistic vision, other precedent projects developed anti-utopian ideas as a form of positive subversion, illustrating a future in which a kind of superarchitecture acts as an automated global service and infrastructure, supporting ahumanity finally free from the burden of labour.

Although the public internet had not yet been imagined when Frassinelli wrote Twelve Cautionary Tales, the description of the 2.000-Ton City represents an almost hyperbolic version of the digital world we live in today. Considering the possibilities afforded by ubiquitous screens — always-accessible content and interactions; the rapid acquisition of items and services without leaving one’s home — combined with restrictions on movement and physical interaction in the wake of the Covid-19 pandemic, Frassinelli’s frightful vision feels more real than ever.

Starting at the domestic scale, it is easy to compare, say, the tiny space of a rented bedroom in a metropolitan shared apartment with the 2.25-by-2.25-metre space of the cells in Superstudio’s design. From bed, consumers can access interfaces which can fulfill their every desire: whether that be fresh food, a sex toy, or reading material. These interfaces are not spatial (yet): neither occupying entire walls of our apartments, nor connected to a brain-impulse receiver. For now, they are limited to the screens, cameras, and microphones of digital devices. E-commerce companies such as Amazon make this possible, transforming desires, through the click of a Buy Now button, into a set of electrical inputs that will initiate a series of protocols precisely calculated to satiate the shopper’s needs. However, packages are not magically transported through an abstract network of apparatuses incorporated into walls and furniture, but instead carried from a fulfilment centre to the consumer’s front door through a private fleet of vehicles that primarily depend on ageing public infrastructures and self-employed drivers.

Other projects by Superstudio, such as the Supersurface or the Continuous Monument, also resemble in their spatial configuration the supply chain’s most important elements: fulfilment centres. Gigantic warehouses, located in the peripheries of metropolitan agglomerations, are meticulously sited using advanced algorithmic systems that take into consideration the quality of nearby transport infrastructures, availability of low-wage workers, and the possibility of consistent subsidy packages from local governments. These spaces are designed to be as functional as possible, where automated machines tirelessly re-enact the frictionless protocols of sorting and shipping products — a system within which humans are marginal, if not completely rejected. Fulfilment centres are usually so big that they transcend the scale of architecture itself: like the Continuous Monument, it’s possible to consider them more landscape than architecture, perceived from the outside as an endless, redundant facade that can reach enormous lengths, even more than one kilometre, in some cases. 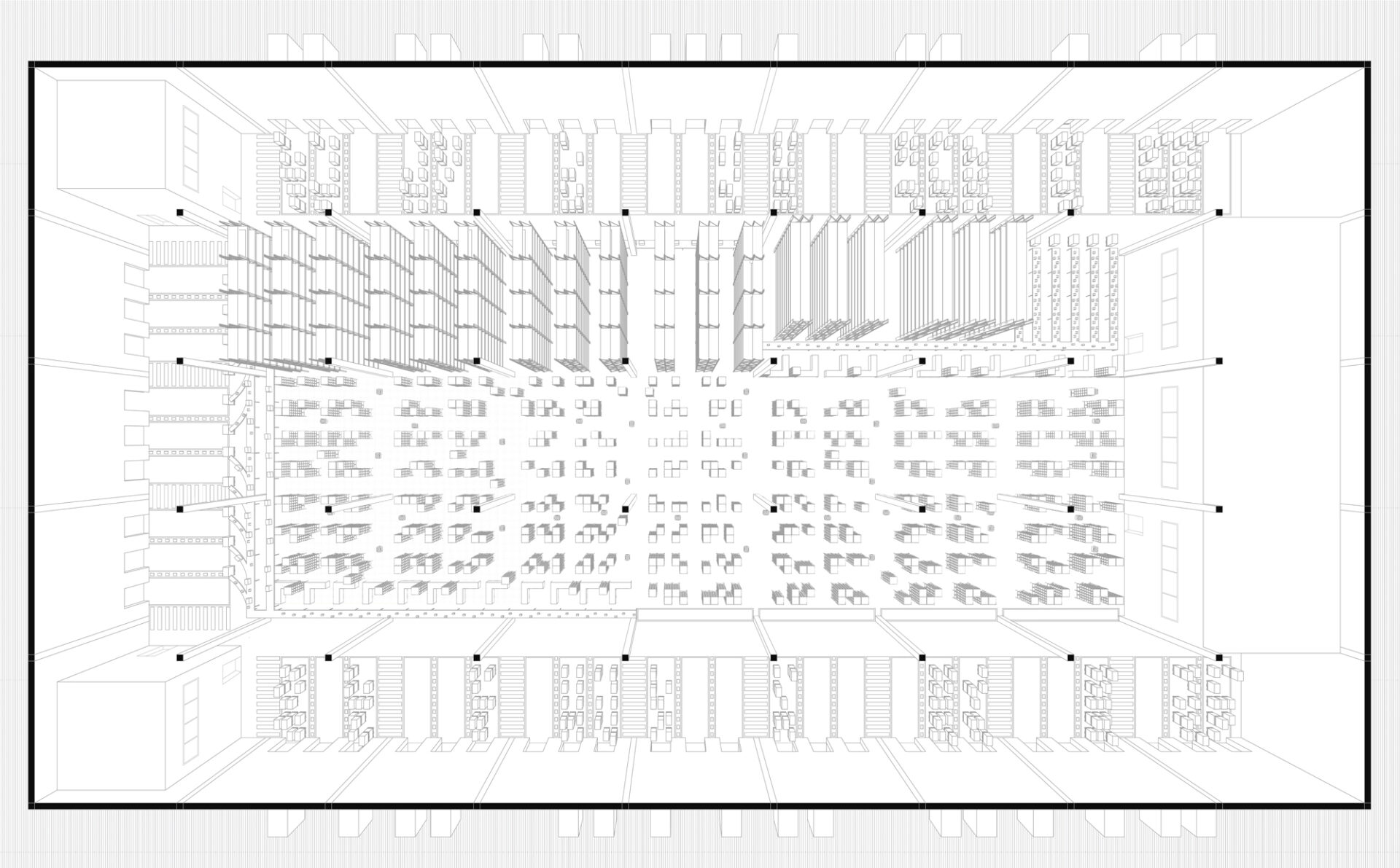 A plan view of a typical fulfilment centre.

But what we see from the outside misrepresents what a fulfilment centre really is. As the architectural theorist Clare Lyster describes in her book Learning from Logistics, the technology at the heart of the centre’s essence is nothing more than a single continuous surface. Since the processes of object-machine automated interactions actually make e-commerce possible at scale, logistics “overwhelm architecture.” The only fundamental, physical element of this scheme is the ground on which these interactions take place. Theoretically, a fulfilment centre just needs the continuity of ground to make logistics work. It could lose its architectural limits, its roof and walls, exposing the fluxes of semi-autonomous robots — moving, with the help of machine-readable sensors, on their own kind of digitised “ground” — and still function perfectly. But the ground of a fulfilment centre extends beyond its walls to merge with the grounds of other parts of the logistics chain: roads, train tracks, sorting centres, truck trailer beds, and ultimately homes as the final storage space of accumulated stuff. The sum of these grounds results in a seamless infrastructure.

This seemingly continuous ground is not so different from those surfaces narrated by the radical architects half a century earlier. Superstudio’s Supersurface is described as a gridded, ground-based infrastructure supporting life, in which “every point is the intersection of two straight lines … not only to be understood in a physical sense, but as visual/verbal metaphor for an ordered, rational distribution of resources.” The Supersurface, equipped with miniaturised technology, is the only thing that a new humankind, free to move across it and pursue unalienated relationships, will need. If, as in Superstudio’s projects, the ground becomes a blank surface of infinite possibilities for its inhabitants, the ground of a fulfilment centre represents the near-perfect efficiency of a hyper-controlled system where every movement, every electrical input and output is determined by an algorithm-based software.

These similarities show how what was seen by the Superstudio members as a threat during their time — the complete commodification of life, and takeover of capitalist protocols — has now become a banal reality: first, the neoliberal turn in Italy in the 90s, ushering in deregulation and privatisation; and then, the exponential developments in technological automation which emerged through a globalised market in the 2010s (the decade Amazon became available in Italy). Their fears have materialised into the shape of a ubiquitous e-commerce service platform: a different sort of superarchitecture altogether.

This happened, in part, not only because Amazon is the primary supplier of those desired items and digital services, but also because it provides much of the internet infrastructure that supports digital life. Amazon Web Services, the largest cloud computing platform in the world, hosts everything from entertainment services like Netflix, to the web presence of multinational corporations such as Unilever and even government institutions like the United States Central Intelligence Agency. “The Everything Store” is much more than the e-commerce platform it used to be just a few years ago: it has developed to accommodate a seemingly infinite variety of services, from streaming to small business financing. Whatever you think you need, Amazon can deliver it to you.

Yet this frictionless consumer experience, which seems to offer an endless horizon of opportunities, obviously does come at a cost. Amazon’s profit strategy consists primarily of collecting data from its customers in every possible way: through order histories, of course, but also through tracking every single click on its website, and even measuring how much time it takes to make a purchase. As James Thomson, a former Amazon executive, puts it, the company “happen[s] to sell products, but they are a data company.” When customers look for a specific product in the Amazon catalogue and add it to the virtual cart, they most likely end up buying something else, too — another product suggested by Amazon’s so-called A9 algorithm. This refined, patented technology runs Amazon’s search engine, combining a product’s “relevance” with analysis of past search patterns to anticipate what customers want (or, what Amazon wants customers to want). The company’s capacity to offer limitless options collides with its equally limitless capacity to persuade and manipulate its customers.

If Superstudio’s vision of a superarchitecture is an endless, massive physical structure that seamlessly colonises both rural and urban landscapes, Amazon’s superarchitecture is fragmented into whatever device can be used to connect to every piece of its logistics network: a tangible whole made of fulfilment centres, fibre optic cables, trucks, data centres and peoples’ homes, along with a digital footprint encompassing websites, algorithms and data itself.

In the 2.000-Ton City, Frassinelli’s pessimistic vision takes over. Women and men are subjugated by the city itself; the infrastructures that control their lives have left them without any freedom to the point that, if one of the citizens were to rebel against their oppressive superarchitecture, “the ceiling panel [of the cell] descends with a force of two thousand tons until it reaches the floor.” But in Superstudio’s other more optimistic projects, such as the Continuous Monument, superarchitecture is a totalising, but not totalitarian, apparatus of human liberation. The collective was dreaming of the subversion of the superarchitecture of production and consumption: not to destroy it, but to bend its features to create an alternative world. In the Continuous Monument, they propose an interminable uniform structure based on a grid: totally artificial and hyper-controlled through autonomous energy flows, thermal barriers, and radiations that obviate the division between inside and outside. Within this huge space, wired and perfectly acclimatised, it would be possible for humans to dwell everywhere. A nomad citizen would be freed from the burden of both work and consumption because they would have everything they wanted, whenever and wherever they wanted it, without paying for it, finally free to, in the words of Superstudio members during a conference held at MAXXI, Rome, in 2014, “listen to their heart and their breath. Seeing themselves living”.

Nothing is left of this particular imagined scenario — and it won’t be real any time soon. From the marginal space of our bedrooms, through the screens of our devices, Amazon instead seems to become a more and more ubiquitous and inescapable presence in our lives. We already live in a superarchitecture. But whose is it, and whose can it be?

CAPTCHA
CAPTCHA is a research design platform that investigates our contemporary condition through the relation between architecture, technology and ecology. Contrary to the challenge-response test it's named after, CAPTCHA tries not to tell computers and humans apart. Its members are currently based in Milan and Amsterdam.

#01 Data Space: The Architecture and Impact of Data Centres