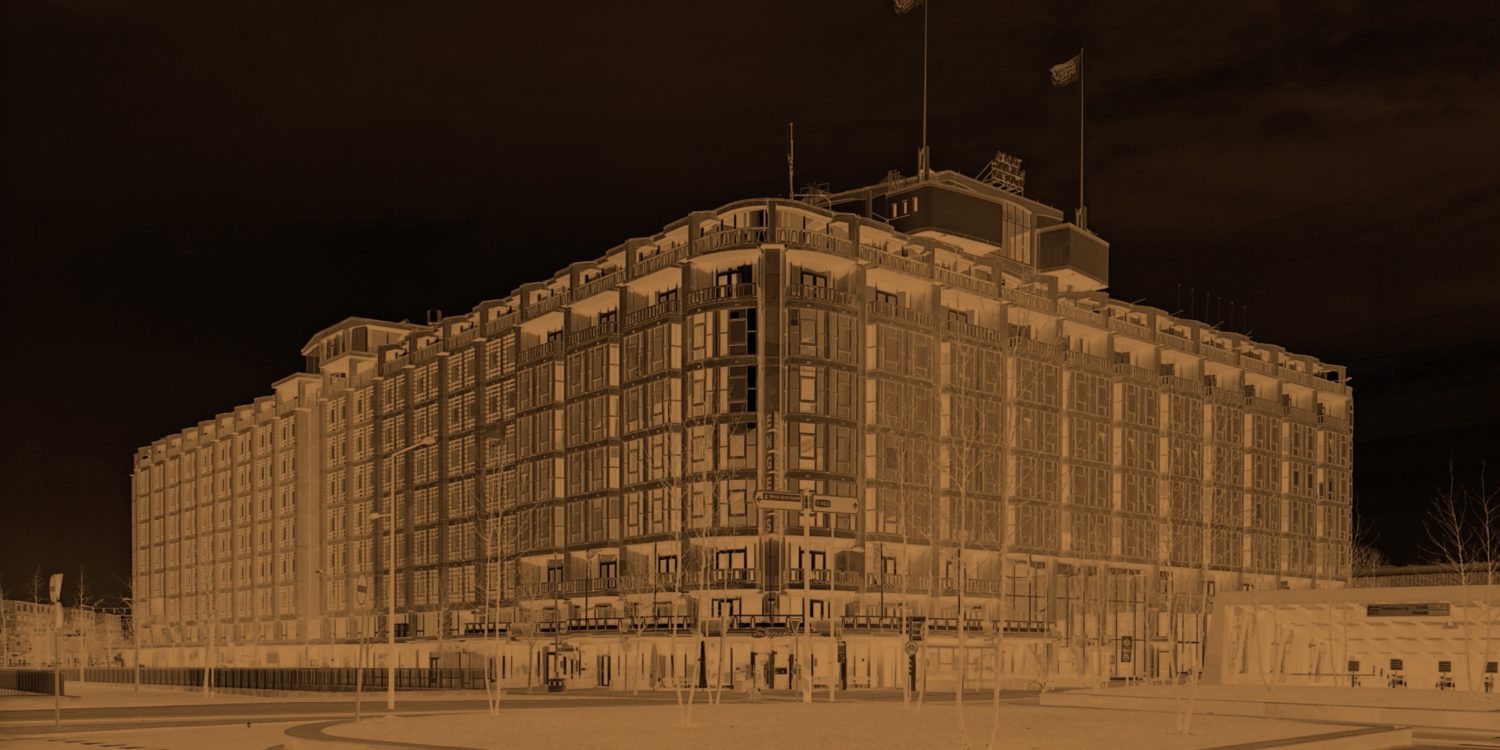 The private equity firm HighBrook Investors must have sealed the €289 million-sale of Rotterdam’s Groot Handelsgebouw in December 2019 awash with champagne. Only eighteen months before, they had acquired the monumental office building for just €169 million. What had happened in one and a half years to inflate the building’s value by the tidy sum of €120 million? Observed from the adjacent station square, nothing remarkable had changed about the Groot Handelsgebouw, a building that has been one of The Netherlands’ principal modernist landmarks since its completion in 1953. Indeed, its grand architecture had remained practically the same as it was eighteen months before, the only visible difference was in the elegantly designed letterboxes in the lobby, and even then it was only their labelling that had changed.

Between purchase and sale, HighBrook’s brokers had confirmed at least 33 new and extended lease contracts. Among them, startups and consultancy firms, but also the national governmental administration for education (DUO) and the Creative Industries Fund. Seduced with incentives including rent-free periods and novel furnishings, in the space of one and a half years, new tenants allegedly raised the building’s occupancy rate from 82% to 90%. In the meantime, rental rates per square meter increased significantly, by as much as 40%. What proved instrumental in opening up existing leases as well is a loophole in building regulation called the “glass-line-correction”. Each time the property changed owner, its asset manager commissioned a surveyor to remeasure each of the building’s 122.000 square meters. By including the area of window sills, a few extra square meters can be added to this seemingly static asset.

But how do these new leases then explain the €120 million-leap in market value? The economic value of commercial real estate is not necessarily defined by the assessment of a building’s physical state, but by its annually generated revenue, and the capacity to increase these revenues in the future. For this calculation, smart asset managers have developed a multiplicity of advanced algorithms based on big data and artificial intelligence, yet in practice, one idiosyncratic formula seems to dominate: market value = net operating income / cap-rate.

In this formula, the first denominator, the net operating income, comprises the rental revenues minus operating costs. An increase in rental income, therefore, leads directly to an increase in market value. The second denominator, the cap-rate (short for capitalisation rate) is a ratio that primarily derives from the analysis of past transactions on the same location, and indicates the risk of the investment. During buoyant economic times, cap-rates decrease, as risks are low, and prices go up. That is exactly what happened with the Groot Handelsgebouw in the years after the completion of Rotterdam’s adjacent new railway station.

Another factor influencing the cap-rate is the stability of the leases. The new leases with the aforementioned public institutions reduced the risk of investment (as it’s much less likely for them to go bankrupt compared to, for example, a startup) so they indirectly contribute to a decreasing cap-rate. Groot Handelsgebouw’s 2019 annual report discloses that the 289 million-sale was made against a cap-rate of 5%, while the year before a rate of 6.26% applied. According to the formula, this seemingly minor difference leads to a prompt increase in market value by as much as 25%. No wonder then, that Patrice Derrington (Professor in Real Estate Development at Columbia University) has recently described cap-rates as “the biggest fake news of real estate finance today.”

The underlying truth of cap-rates in real estate markets is that they have empowered global investors to speculate on local markets of which they have minimal knowledge. As illustrated in the spreadsheet above, the ramifications of this phenomenon in the Rotterdam Central District are striking, with almost all buildings having changed owners multiple times since the 2008-crisis. First, risk-seeking American private equity funds arrived, including Blackstone and HighBrook, who then rapidly sold on again to investment funds from China and Singapore such as the Anbang Insurance Group. In their turn, the Asian funds made way for a third wave of predominantly London-based funds like the Aviva Group, Tristan Capital, and Aegila Capital. While over the course of ten years hardly any of the buildings changed physically, the underlying financial architecture changed frequently. 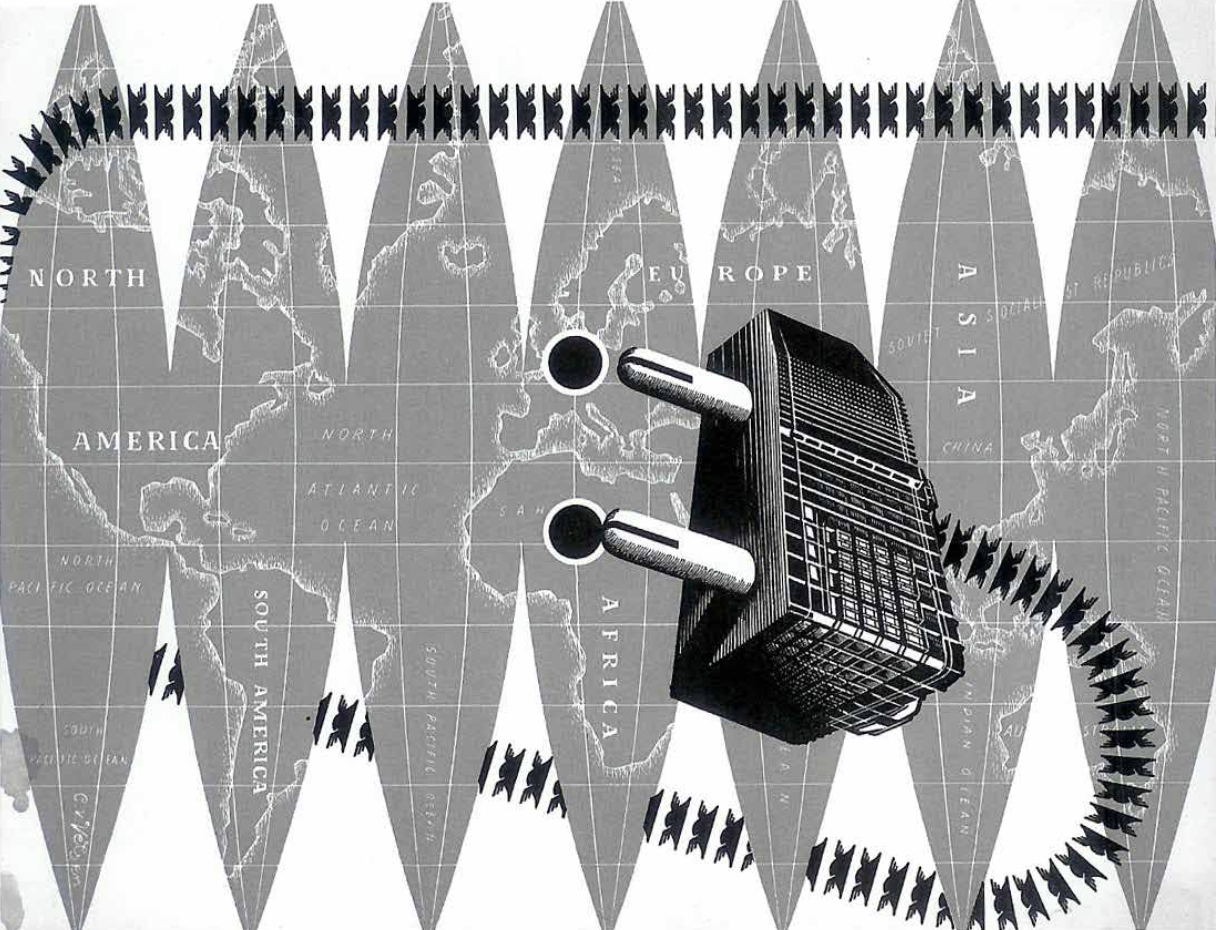 Collage published at the occasion of the opening of the Groothandelsgebouw in June 1953.

Ewald Engelen (Professor of Financial Geography at the University of Amsterdam) has related these moves to the quantitative easing of national banks in the wake of the global financial crisis of 2007-2008, in which domestic money supplies are rapidly increased as a means of spurring economic activity. As capital markets have become flush with cash that needs to be put in motion in order to retain its value, the demand for all asset classes increased tremendously over the course of the last decade, causing real estate markets over the world to go through the roof. On top of that, increased regulation by financial market authorities as a result of the crisis has forced institutional investors to diversify their assets, both geographically and categorically, in order to spread risk (which also explains the influx of capital from the US, UK and Asia in an area like this). Their asset managers show no interest in the city housing their capital, only in diversifying their risks and ultimately ensuring return on equity.

That commercial real estate isn’t a novel phenomenon is exemplified by the history of the Groot Handelsgebouw (Dutch for wholesale building). Ever since its construction on the ruins of postwar Rotterdam, it has been a protagonist in the aspirations of this district, actively catalysed by local and national governments. When after the 1940 bombardment every wholesaler in town was made homeless, clustering business in a large-scale building offered not only an economy of scale, its unprecedented size also helped attract the attention of the government, so that they ended up providing the majority of the building’s funding through mortgages from the recovery bank and a federal subsidy. The investment was meant to catalyse business activity and the development of a vibrant core, which the city had lost in the bombing.

This process was repeated in the 1980s when the municipality actively contributed to the transformation of the thoroughfare into an office-lined boulevard. And in the 2010s again, when a major public investment in the new international railway station opened the district up, for good, to a new international audience. This latest endeavour has also included the municipality’s decision to rebrand the area as the “Rotterdam Central District,” which was accompanied by the active pursuit of foreign investors at international real estate fairs. While the shares of Groothandelsgebouwen NV were listed at Amsterdam’s stock exchange, in 2016 the asset’s exposure was further boosted by the temporary installation of a publicly funded staircase-cum-landmark designed by MVRDV.

The trickle-down effect—the hobbyhorse of neoliberal city governance—advocates that public investments in select projects eventually trickle down to society at large. The case of Groot Handelsgebouw exemplifies not only its fallacy but reveals an opposite effect, in which public investments primarily seem to be exploited by a rotating host of global speculators. As tenants of these buildings are still predominantly local businesses, their increasing rents eventually disappear into the silk-lined pockets of the champagne-toasting shareholders. After all, the abstraction of a building’s value into a single simple financial formula renders it as a subject of speculation, traded, managed, and programmed remotely from distant geographies.

This article is part of the FA series Cities After Algorithms, which is produced in collaboration with the design research initiative Aesthetics of Exclusion, and supported by the Dutch Creative Industries Fund. It is also part of Het Nieuwe Instituut’s research project Financial Architectures to unfold the financial instruments and agents that increasingly denominate the value of cities, and with that the access to it. The research is informed by an online event organised as part of Het Nieuwe Instituut’s Thursday Night Live! program with guests Ewald Engelen, Michelle Provoost, and Wendy Verschoor on Thursday, March 25, 2021.

add comment
Kacie Goodman
“To live richer is to follow the inner path to wealth and abundance. Living richly is no longer defined by earning and spending large sums of money.
Related

NYC’s Reopening Plans Depend on a Holy Trinity of Diners, Designers, and Capital